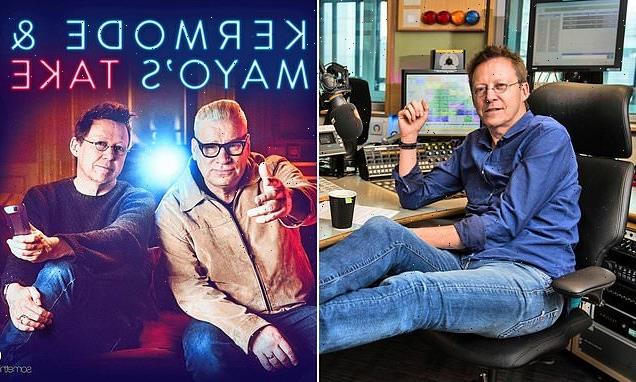 I’m glad NOT to be at the BBC! Legendary radio DJ and best-selling author Simon Mayo on how he’s soared since his ignominious exit from Broadcasting House

Simon Mayo has always been a quiet storm. Over the past 36 years he has become one of the most trusted voices in radio – and a best-selling novelist to boot.

But the past half-decade has been tumultuous for the one time darling of the BBC.

Simon emerged from local radio in his 20s and was fast-tracked to pole position as host of Radio 1’s breakfast show in 1988, a time when DJs were bigger stars than many of the artists they played.

‘In the first press release I was described as an egghead because I was the only DJ with a degree,’ he laughs. 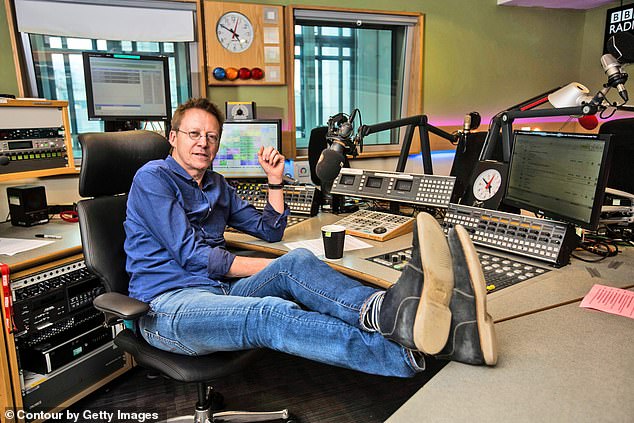 Simon Mayo (pictured) emerged on local radio in his 20s and was fast-tracked to Radio 1. Last year the DJ and author was awarded an MBE for his services to broadcasting

‘A week later they changed it to “heart-throb”. I didn’t fit either category – maybe more egg-throb.’

Whatever he was, he proved to be a hit. Married to researcher Hilary Bird, this London-born son of a headmaster was more decent chap than party animal.

He never went on the Radio 1 expeditions to Ibiza (‘No one asked me and I’m rather glad’) and didn’t recognise Naomi Campbell when she presented him with a birthday cake live on air (‘Embarrassing!’).

Simon, last year awarded an MBE for services to broadcasting, was able to seamlessly adapt to TV presenting, from Top Of The Pops to Blockbusters. He helmed the breakfast show for five years, then moved to a mid-morning slot and finally left Radio 1 in 2001, to host a daily topical debate show on BBC Radio 5 Live.

His memorable radio moments don’t involve spinning discs with pop stars. They do include broadcasting live as the Twin Towers fell and, in 2007, an impromptu discussion about God between Ricky Gervais and thenArchbishop of Canterbury Rowan Williams.

‘It hadn’t been planned,’ he says. ‘Ricky was leaving the studio as Rowan was coming in, but it was one of the most interesting conversations I’ve taken part in.’ 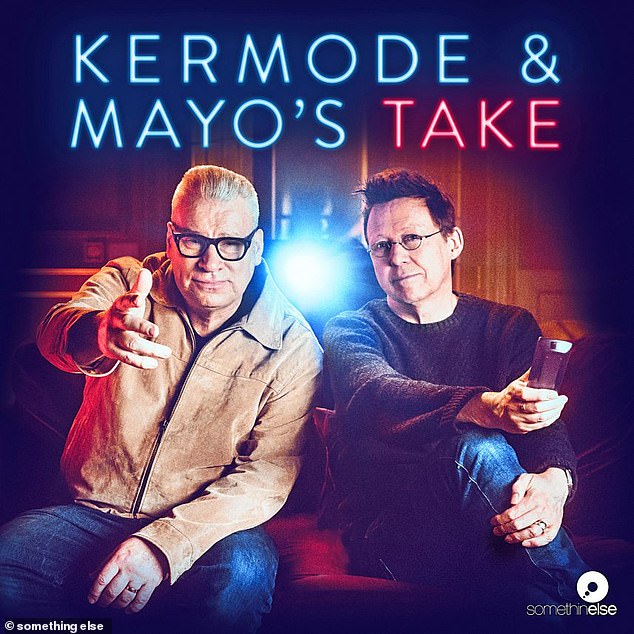 He talks about pushing his fingernails into the palms of his hands to stop himself crying when he sat with football legend Bob Wilson as Billy Bragg played Tank Park Salute (Billy’s tribute to his dad, who died when he was a teenager).

‘Bob lost his daughter, my father had died a few years before and the three of us talked about grief,’ says Simon. ‘Again, it was impromptu again, we just let it run, and again, it meant something to listeners.’

In 2008 he was named Broadcaster Of The Year, and in 2010 succeeded Chris Evans in the prestigious Radio 2 Drivetime slot. Then things changed.

And Simon, 63, whose latest novel Tick Tock has just been released, is under no illusions why. He doesn’t fit with the times.

‘I am very much male, pale and stale. And that, for a lot of people, is a problem.’

He has been on quite the male pale-stale journey. In 2018, the powers-that-be decided (without consultation) to bring in a female co-presenter to his Drivetime show. His friend, Jo Whiley.

His six million listeners were outraged. Jo was trolled to such a degree that she said she was ‘scared to leave the house’.

Furious and helpless, Simon quit to go to a brand-new station, Scala Radio. (Simon took revenge on his Radio 2 bosses in one of his books, but more of that later).

He continued to host Kermode And Mayo’s Film Review with critic Mark Kermode on 5 Live, but after a fractious few years, he finally cut ties with the BBC when he and Kermode transferred their show to Apple Podcasts, renaming it Kermode And Mayo’s Take.

We discuss his last moments at Broadcasting House as he left it for the final time in April this year. In a scene that could have come from the BBC spoof comedy series W1A, he left not with a bang but in an ignominious scuffle with security. 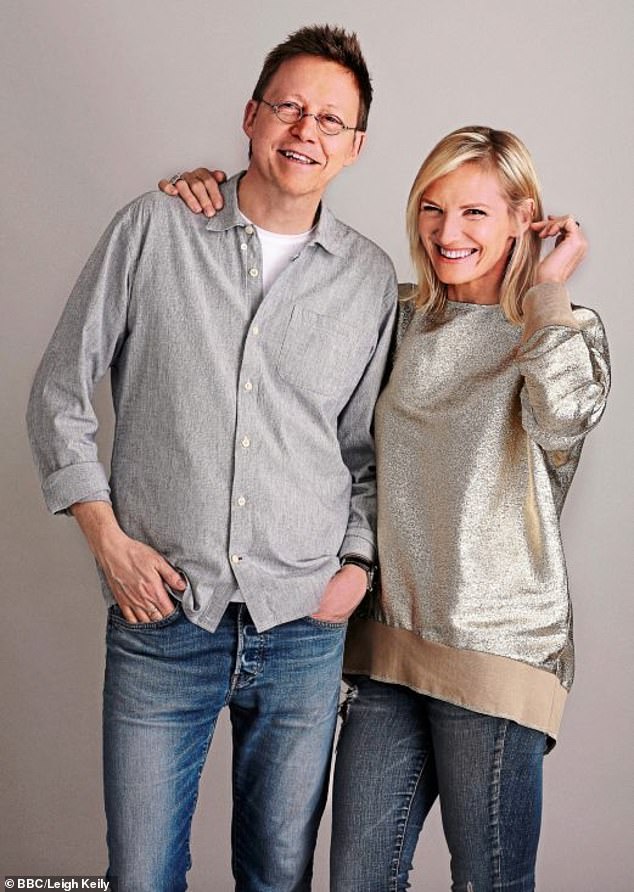 In 2018, the powers-that-be decided (without consultation) to bring in a female co-presenter to his Drivetime show – his friend, Jo Whiley (pictured)

‘My pass was cancelled before I left the building,’ he says. ‘It wasn’t the way I wanted to leave, being helped by the security people. I did get a fulsome apology but… yes, that was it.’

He was not cast out into broadcasting oblivion. His stint on Scala Radio was a massive success for the station, and last year he was headhunted to revive his Drivetime show on Greatest Hits Radio.

His audience remains loyal, his podcast with Mark Kermode remains massively popular. ‘And we are both fully aware if we went to the BBC as two old white men off the street, this is not a show that would get off the ground,’ he says.

Yet Simon is as driven as ever. Tick Tock (his seventh novel) is about a disease that threatens to wipe out humanity and the people at the heart of the storm: teacher Kit, his feisty daughter Rose, his scientist partner Lilly and Lilly’s daughter Jess.

The characters are well observed, the dialogue effortless and the twists and turns never-ending.

Simon came up with the plot pre-Covid and, as the pandemic took hold, feared he’d have to dump it. ‘I worried that it would be too much,’ he says.

‘But after discussions with my editor, I knew I could move it beyond the pandemic so it would feel like something that informed the story rather than mirrored it.’

He based some of the plot on a Daily Mail article about the Novichok incident in Salisbury in 2018, in which Sergei and Yulia Skripal were poisoned by a nerve agent and a third party, Dawn Sturgess, died. British authorities identified two Russians as suspects.

The article was written by his younger brother, Jonathan, a regular contributor to the Mail. ‘I found the whole thing fascinating,’ says Simon.

‘Science is compelling. My bookshelves suggest I’m either a medical student or scientist!’

Simon’s had huge success as a writer since his debut as a novelist in 2012. His thriller Knife Edge was a bestseller and it was in it that he ‘murdered’ his former BBC bosses.

‘If you look at the people who get killed in Coventry Cathedral at the end there is… a superficial similarity between them and Radio 2 management,’ he has said.

His children’s trilogy, Itch, is now a series on CBBC, and the film rights to his novel Mad Blood Stirring have been sold. I ask how he combines broadcasting and writing and he says he writes a book every two years.

‘One is thinking, the other is talking, but both require work. I like both in my life.’

He has no plans at all to retire. ‘Never,’ he says firmly. So what drives him?

Did this middle child of three always feel he had something special to offer?

‘The opposite. I was a late developer. I only started to find myself when I did A Levels and got accepted to do History and Politics at Warwick [University].

As a child, home was his happy place and family life remains massively important. Hilary, their three children – Ben, 30, Natasha, 28, Joe, 22 – and three-month-old grandson Oscar are the centre of his world.

He says he’s an introvert who always wanted to work in radio, but never expected to find himself on the radio. ‘As a kid I was obsessed with radio,’ he says.

‘My mum [Jill] worked as studio manager. I found it riveting. I set up a radio station in my room.

‘My older sister, Sarah, would write the jingles and I’d listen to every DJ, record everything, tune into obscure stations. I was obsessed by the whole world of it.’

His plan was to be a studio engineer like his mum but when he failed the required hearing test (he has a frequency deficiency in his left ear), he began presenting on hospital radio and then BBC Radio Nottingham. He sent tapes to Johnny Beerling, then head of Radio 1, who offered him a job at the station in 1986.

He has nothing to prove. ‘But that doesn’t stop you wanting to do more,’ he says.

Would he consider returning to the Beeb? ‘I still have a good relationship with them but I’m happy not to be there right now.

‘I’d have the conversation, but life is good as it is. You move on.’