A League of Their Own is one of those films that will always bring a few tears to my eyes, and I’ve got the brilliance of director Penny Marshall to thank for that. It was with a heavy heart that I learned Penny Marshall died on Dec. 17 at the age of 75 from complications due to diabetes. Marshall’s work has a special place in my heart, not only because she brought women’s sports to the forefront of mainstream media, but also because she chose to highlight a team that originated right in my hometown of Rockford, Illinois. Penny Marshall’s A League of Their Own left a legacy of women’s empowerment not just for anyone who saw the movie, but one that left a very special mark on a small Midwestern city.

I was about seven years old when A League of Their Own came out in 1992; when I first watched the movie, I had no idea the Rockford Peaches were a real-life team, let alone one that hailed from my very same town. The movie depicts a fictionalized version of the Peaches’ role in the All-American Girls Professional Baseball League, which was formed during World War II to keep major league baseball going while male baseball players were away at war. According to the Rockford Register Star, the Rockford Peaches played at Beyer Stadium in Rockford, Illinois, from 1943 to 1954. That’s about 10 minutes from where I currently live, and maybe 20 minutes from where I grew up.

I wish I would’ve known as a kid that all those characters were based on real people who had actually lived in my town. Gender roles were a little stricter back in the early ’90s, but I didn’t really fit the mold. Sometimes I liked presenting as traditionally female, but I also really enjoyed things that people back then considered to be traditionally male. I liked playing football with my brother and his friends and jumping off of big hills and getting super dirty. So when the women in A League of Their Own pushed back against being "ladies" and wearing short skirts, seven-year-old me was in awe.

One of my favorite scenes from the movie was when the players first saw their uniforms. I didn’t know what sexism was at that age, but even as a seven-year-old kid, I felt the power behind the players’ protests at how it would be impossible for them to slide the bases in those uniforms. I remember thinking to myself that you can’t expect a real athlete to wear uniforms like that. It’s moments like this throughout the movie that made little girls across the country sit up and recognize that we were feminists in the making — even if we didn’t quite know it yet. 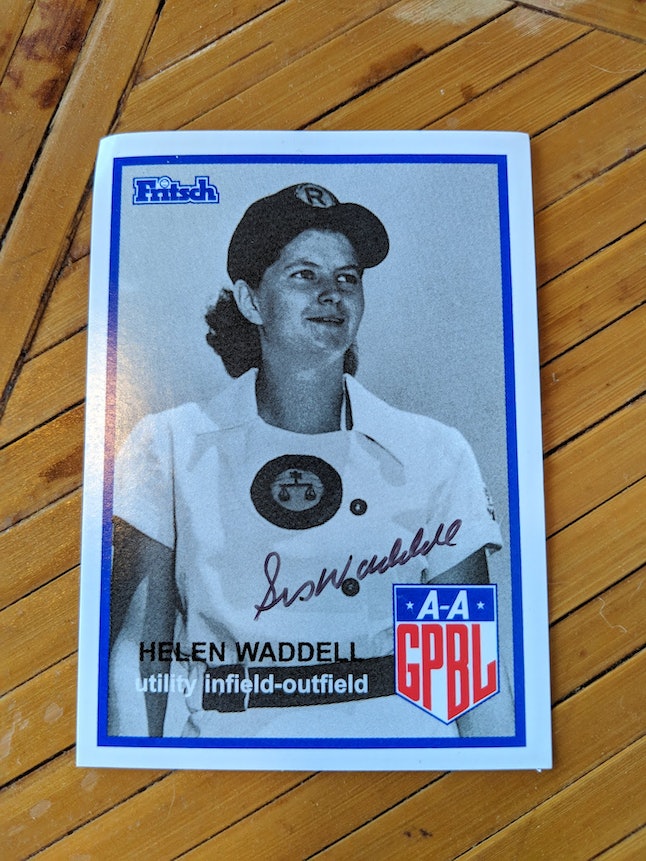 It wasn’t until I was an adult that I discovered the connection between the movie and my hometown. I can’t exactly remember how I found out; I think my dad might have told me when he brought me a baseball card signed by Helen “Sis” Waddell, one of the original members of the Rockford Peaches. Today, Rockford has fully embraced its legacy with the baseball team, and you can see Rockford Peaches memorabilia almost everywhere you go, including a special exhibit dedicated to the team at the local history museum.

Of course, A League of Their Own has touched far more lives than just those in my town. The film depicted a seminal moment in women’s sports, highlighting a point in history when women were finally allowed to play baseball on a national level — even if only briefly. “I hear it all the time,” actor Megan Cavanagh, who played Marla Hooch in the movie, told the Chicago Tribune. “People say, ‘We watched the movie on the bus on the way to our games. So many girls say if it wasn’t for the movie, they wouldn’t have played ball. What more can you ask for?”

Back in Rockford, the legacy of A League of Their Own will carry on through a $6 million International Women’s Baseball Stadium at Beyer Stadium that will be the home to a museum and various special events, according to the Rockford Register Star. Over the years, I’ve seen Rockford grow to embrace its love for the Peaches more and more. My friends were part of fund-raising efforts to re-open Beyer Stadium a few years ago, and in 2018, the city celebrated the Peaches’ 75th anniversary with several days of festivities.

But while my town is rightfully proud of this really important and progressive legacy, my experience as a biracial, queer, feminist writer living in Rockford has not been as positive as that of the players who formed the Rockford Peaches. As someone who’s in a league of my own, I have firsthand experience with just how tough it can be living here for people who are different. I know I’m supposed to throw in a “there’s no crying in baseball” joke here somewhere, but I’m so grateful to Marshall for showing Rockford how progressive it can be, and leaving my town a legacy of greatness that shows Rockford what it truly can be. Me? I’m gonna walk through my city tonight and remember the night my dad gave me my first baseball card.