‘I’m a Celebrity? It’s bittersweet’: Holly Willoughby reveals how she really feels about replacing Ant in the jungle and what she’s sacrificed for her family

It’s been a year of tough decisions for Holly Willoughby – from walking away from her much-hyped lifestyle brand to agreeing to step into the presenting shoes of her troubled friend Ant McPartlin. But,Julia Llewellyn Smith discovers, Britain’s sweetheart has a steely side when it comes to focusing on her priorities 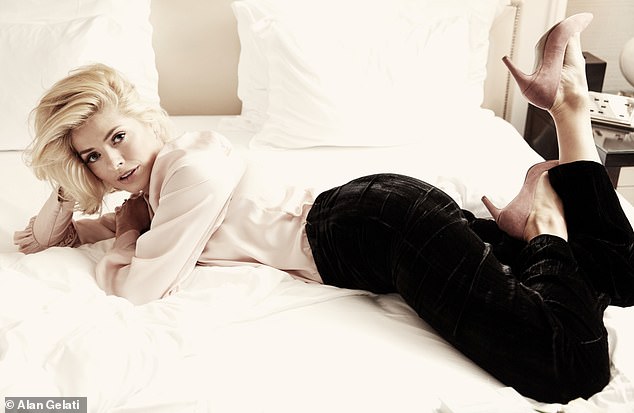 Fresh from hosting ITV’s This Morning, Holly Willoughby is sitting on a sofa in a Central London hotel, reflecting on her imminent trip to the Australian jungle to co-present I’m A Celebrity…Get Me Out Of Here! She is the replacement for her close friend Ant McPartlin, who pulled out of co-hosting the ITV reality show with best friend Declan Donnelly to focus on his recovery from prescription drug addiction and alcohol problems. ‘It’s definitely bittersweet,’ says Holly, 37. ‘I’m A Celebrity is a huge show but nobody wanted to have to be asked to do it. It’s not nice for anyone.’

The presenter, who lives close to both Ant and Dec in West London, frequently socialises with the pair. In fact, it was to Ant’s house that she and her This Morning co-host Phillip Schofield famously repaired after winning a National Television Award in 2016. They did the show live the following morning decidedly worse for wear, an incident that, given Ant’s alcohol problems, perhaps seems less hilarious in hindsight. But Holly, mother of Harry, nine, Belle, seven, and Chester, four, has no regrets: ‘You have to mark these occasions. What else is it all about? I’ll be telling my great-great-grandchildren all about how we celebrated winning our award for best magazine show,’ she grins. 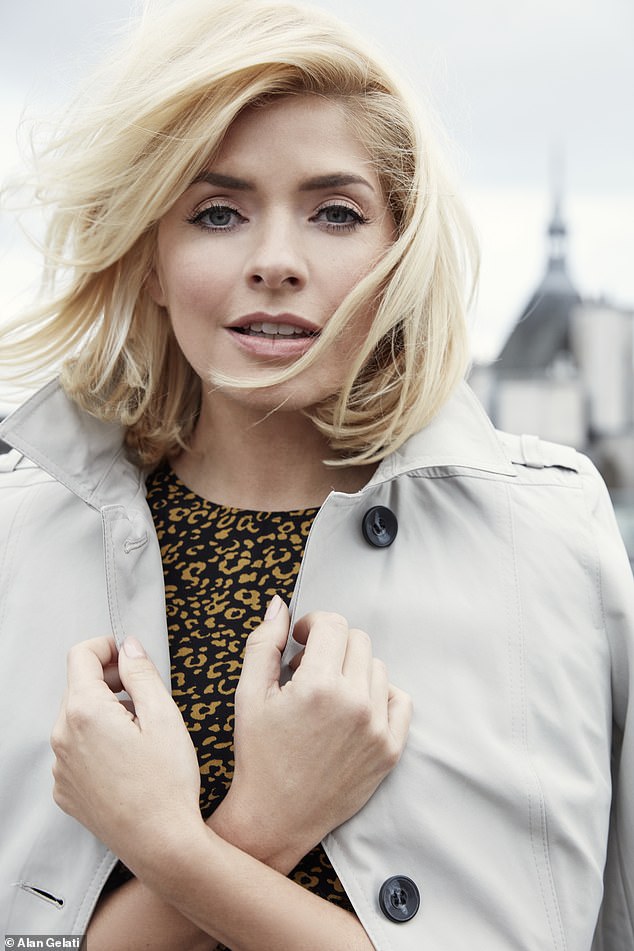 She’s always refused to publicly discuss her friend Ant’s shambolic personal life (this year he also divorced Lisa Armstrong, his wife of 11 years). Holly had to defend herself from viewers’ criticisms when she and Phillip omitted to mention Ant crashing his car when drunk and his subsequent arrest in March this year when discussing the news on the following day’s This Morning. ‘It’s not something anybody should be talking about,’ she said at the time, ‘out of respect for him. I love him to bits – I don’t find it very easy to talk about.’

Have she and Ant discussed her temporary I’m a Celebrity takeover? ‘Yes, we’ve spoken and he’s happy – he was part of the decision that I’d do it. He just needs to look after himself, that’s the most important thing.’ Clearly, the Geordie duo, with whom both Holly and Phillip share a management team, trust her not to usurp Ant. ‘He knows I’ll look after the show and keep it warm for him,’ Holly says. Her long friendship with Dec also means the pair should have no problem replicating the two men’s well-established rapport. ‘On I’m A Celebrity it’s important to have chemistry and to have a friendship as a starting point you can grow from,’ Holly says. ‘It’s that unspoken thing: you know how the other person speaks, how their sentences are going to end. That helps a lot.’ 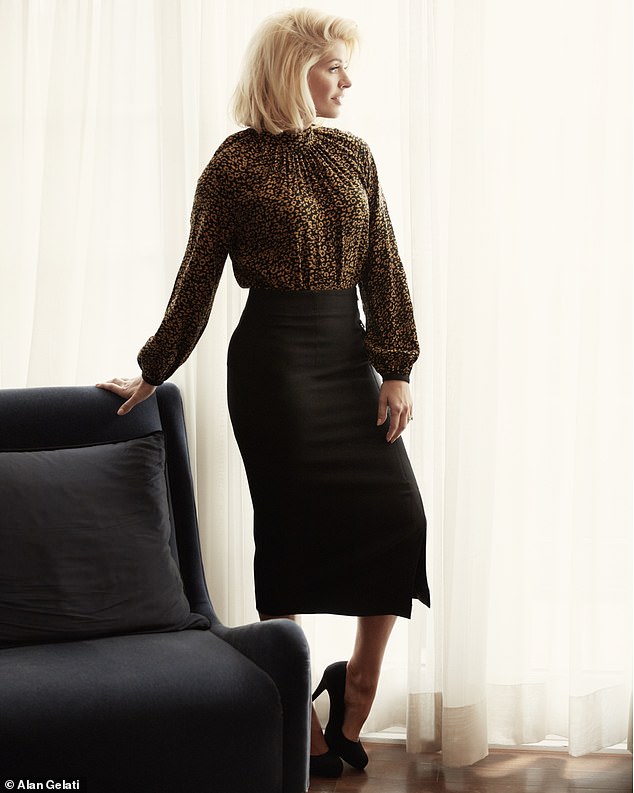 Holly’s talking from experience: she and Phillip, with whom she’s worked for nine years, famously have one of the chummiest relationships in showbusiness, constantly dissolving into on-screen giggling fits on This Morning. Their friendship is not just for the cameras: Holly and her TV executive husband Dan Baldwin often socialise with Phillip, 56, and his wife of 26 years, former TV production assistant Stephanie Lowe, even enjoying annual holidays together in the same Portuguese resort.

‘My kids adore Phil and Steph,’ Holly says. ‘Phil’s more my office sibling than office husband. We’re morphing into one person: we say the same thing at the same time and it’s like, “Eurgh, get out of my head!” It’s always been that way. We have the same family values, we like to have a laugh and a drink but we’re actually both quite lazy.’

Lazy? What is she talking about? Even before I’m A Celebrity, Holly was everywhere, presenting not only This Morning but also Dancing On Ice and appearing as a team captain on ITV2’s Celebrity Juice. ‘I know, but none of that was planned,’ she says. ‘I didn’t expect to enjoy my work as much as I do and when you enjoy something it’s hard to say no. But I could sit on the sofa and do nothing for weeks. I’d watch telly, I’d eat, I’d go online, I’d be so happy!’

It’s a typical ‘shucks, I’m so ordinary’ remark from Holly, who is charming company and – with her apple cheeks and cartoonishly huge eyes and lips – even prettier in person than on screen. The girliness is genuine: her favourite film is the Cinderella retelling The Slipper And The Rose and her daughter Belle is named after the Disney heroine of Beauty And The Beast. But that pink-princess façade belies a tough professionalism that has led to her becoming one of the highest-paid women in British TV (she’ll earn a rumoured £500,000 from I’m A Celebrity and receives £600,000 a year from This Morning).

But while I don’t buy the idea of Holly as a layabout, it’s obvious that she’s a homebody, intent on being as perfect a mother as possible as she is on maintaining her career. That became abundantly clear last month when, just weeks before its launch, she announced that she was walking away from Truly, her lifestyle brand in the vein of Gwyneth Paltrow’s Goop, selling everything from cosmetics and babygear to homeware and holidays. 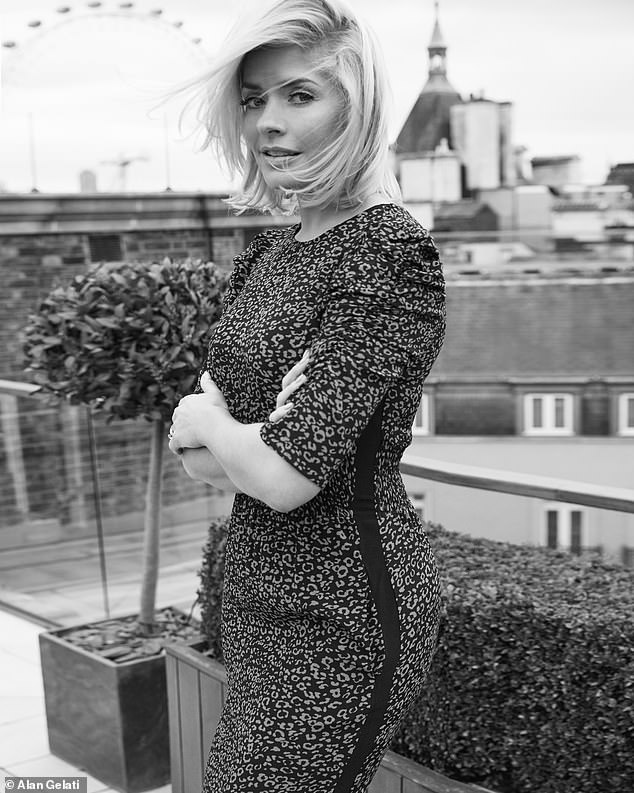 On Instagram she explained that she felt unable to dedicate herself to the brand without it affecting family life. Now, she implies that – when it came to the crunch – the boost I’m A Celebrity will bring her (not to mention helping out her friends Ant and Dec) took precedence over selling baby clothes and bubble bath. ‘Nobody predicted the end of my year would turn out like this. I know that next year I won’t be in the jungle, but I think you just do what feels right at the time,’ she says.

She is pragmatic about walking away from the partnership that was predicted to net her £10 million (which would have almost doubled her estimated net worth of £11 million). Did she have sleepless nights about breaking the news to her friend and Truly’s chief investor Peter Jones of Dragons’ Den fame, who was said to be ‘furious’ at her late defection? ‘When you’re making a decision that involves your children a certain amount of clarity comes with it,’ Holly says crisply. ‘It was the right thing. You can’t do everything, and actually I don’t think many of us want to do everything.’

Despite being able to afford extra help, Holly is adamant that she wants to be as hands-on as possible as a mum. ‘Just because you can pay for something, it doesn’t change the emotional make-up of your being and your wants and desires to be a mum,’ she says. ‘I still dream of having a lifestyle brand but it’s not good enough to have that selfish dream when your kids are getting older and have their own interests. It’s not just about me any more. My eldest, Harry, does football in the evenings and if I’d launched Truly I would have been working rather than taking him to training and watching him play. Belle is into a lot more things as she gets older. It wouldn’t have been fair. My job as a mum isn’t just to provide for my children, it’s to be there. Davina [McCall, her close friend] says when she doesn’t spend enough time with her kids she feels as though she’s going grey inside and I know what she means. When it comes to the kids I don’t ever want to feel I’m missing out on stuff.’

The younger of two girls, Holly enjoyed an ‘idyllic’ childhood in Burgess Hill, West Sussex, where her mother Lynne stayed home and dad Terry sold double glazing. She became a teenage model before moving into children’s TV presenting, meeting and marrying Dan, 43, producer on her Saturday morning kids’ show Ministry of Mayhem, en route. Holly’s relationship has always been her priority. ‘If my career ended tomorrow, I’d be fine,’ she says. ‘If things went wrong between me and Dan it would be the end of my world.’

When she became pregnant with Harry in 2008, she’d just been offered the This Morning job and took only five weeks’ maternity leave, something she says she now regrets. Once she was established on the show, she became militant about her work-life balance, negotiating to work four days a week and never in school holidays. By the time Chester was born she was able to enjoy a whole year at home with him. ‘I really indulged myself in being a mummy,’ she smiles. 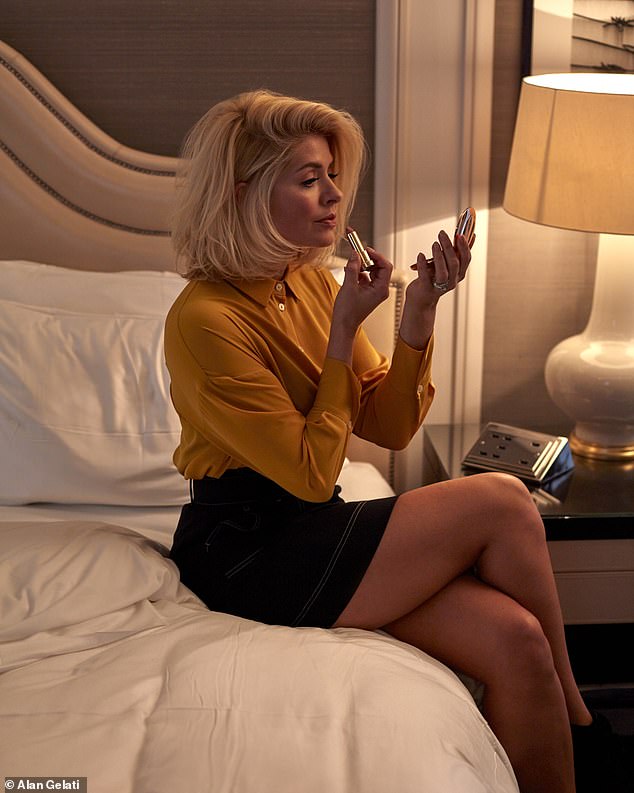 The children (accompanied by tutors) are going with her to the jungle for a chunk of her five-week stint on the show (which includes a two-week rehearsal). Her parents are also flying out, though Dan’s work obligations mean he can only visit for five days. ‘It’s the longest we’ve been apart; it’s rubbish,’ says Holly. She is notably more animated discussing family-related questions (‘Will I have a fourth child? I don’t know! Sometimes I think “Why not?” and sometimes “No way!” Dan changes his mind, too.’) than professional issues.

On Holly’s arrival, her assistant reminds her that we’re here to talk about Marks & Spencer, for whom she was recently appointed style ambassador. To the chain, she’s clearly worth her rumoured £100,000 per season deal, not just because of her mum-next-door appeal but also thanks to her vast social-media presence, with 4.2 million Instagram fans following her daily snaps of the outfits she’s worn on This Morning, all of which invariably sell out. On the launch day of Holly’s Must-Haves in September, the items she’d selected from M&S’s autumn range were snapped up at a rate of one every two seconds.

As ever with Holly, the move to fashion influencer was carefully thought out. Until a couple of years ago, her style could best be described as sensible. But she employed stylist Angie Smith (who also dresses her friend, former Spice Girl Emma Bunton), ditching the prim dresses and skirts for cooler, though still relatable, high-street outfits. ‘I’m not brilliant at clothes. I’m much better at home stuff. I love fashion but I’ve definitely been on a – horrible word – journey,’ she says.

Holly will be modelling her festive Must-Haves as part of the M&S Christmas ad campaign, which no doubt will dominate our screens during breaks from her jungle broadcasts. She’s notorious for blubbing at This Morning’s guests’ tragic tales; so will she be able to control herself during the stressful Bushtucker Trials? ‘It’s not crying I’m worried about, it’s screaming,’ she says. ‘Alison Hammond [This Morning showbiz reporter and former I’m A Celebrity contestant] says uninvited creatures keep landing on you and getting stuck in your hair – that freaked me out. Dec said you get used to it,’ she adds, looking unconvinced. I don’t think Holly need worry. As I said, she’s far tougher than she looks.

We’re offering one lucky reader the chance to win Holly’s entire December Marks & Spencer must-haves edit – plus, we have ten gorgeous leopard-print dresses – as modelled by Holly above – to give away. To enter, go to you.co.uk/holly.

Shot at The Musician’s Penthouse; with thanks to Corinthia Hotel