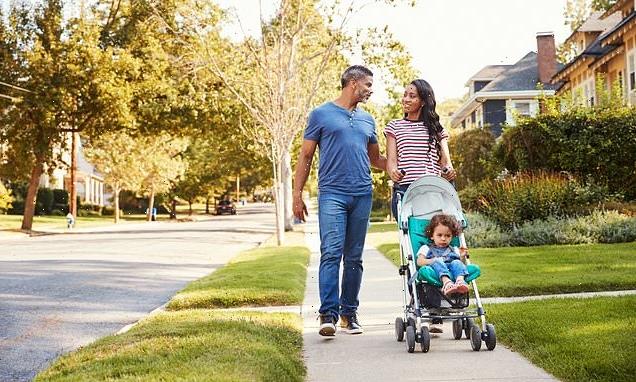 How far would YOU go to save the planet? Mothers reveal what they’d do if they ‘ruled the world’ – from a one child policy to a BAN on meat and an air miles cap – but some claim it’s an ‘impractical communist nightmare’

Parents have shared their radical ideas for halting climate change in a far-reaching online thread.

The anonymous British woman took to parenting forum Mumsnet to ask: ‘If you ruled unilaterally, what would you do to make things (anything) more climate friendly?’

Responses ranged from dramatic rules on food – including making all meat, fish and dairy products ‘illegal’ – to limiting the size of families to ‘one biological child per person’.

Although it was just a thought experiment, some users became heated and said it sounded like a ‘controlling communist nightmare’. 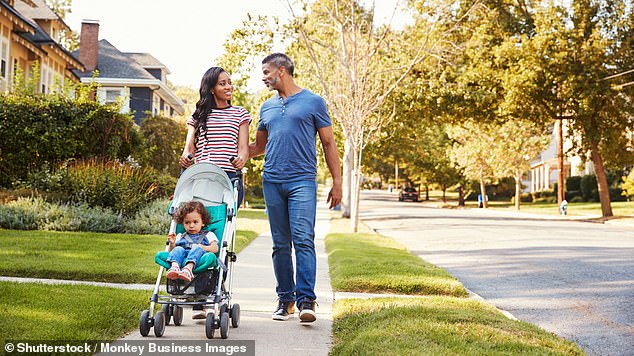 An anonymous British mother sparked a furious debate after asking what changes others would make to help slow climate change – with some suggesting they would ban meat, while others said they would limit family size (stock image) 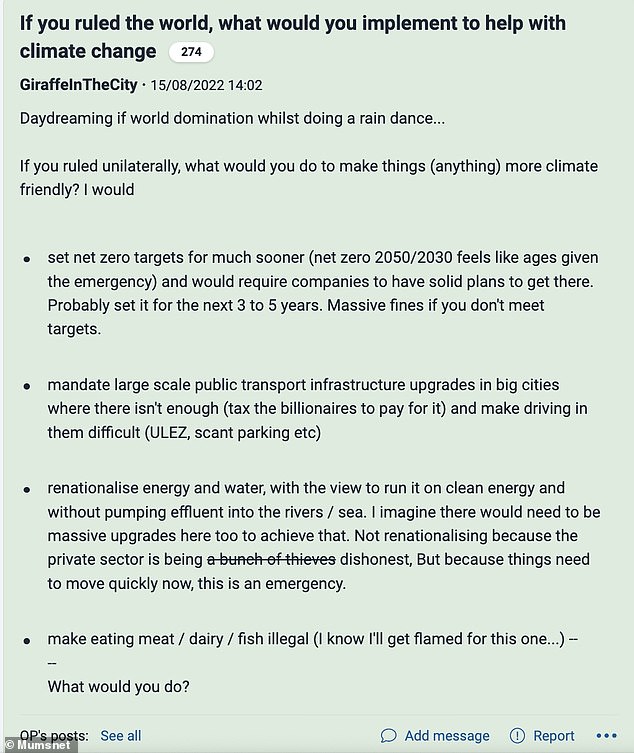 The anonymous British woman took to the parenting forum Mumsnet to ask: ‘If you ruled unilaterally, what would you do to make things (anything) more climate friendly?’

Taking to the site, the mother listed a series of things she would change to slow down the effects of global warming.

She wrote: ‘I would, set net zero targets for much sooner (net zero 2050/2030 feels like ages given the emergency) and would require companies to have solid plans to get there. Probably set it for the next three to five years. Massive fines if you don’t meet targets.

‘Mandate large scale public transport infrastructure upgrades in big cities where there isn’t enough (tax the billionaires to pay for it) and make driving in them difficult (ULEZ, scant parking etc).

She continued: ‘Renationalise energy and water, with the view to run it on clean energy and without pumping effluent into the rivers and sea.

‘I imagine there would need to be massive upgrades here too to achieve that. Not renationalising because the private sector is being a bunch of thieves and dishonest, But because things need to move quickly now, this is an emergency.’ 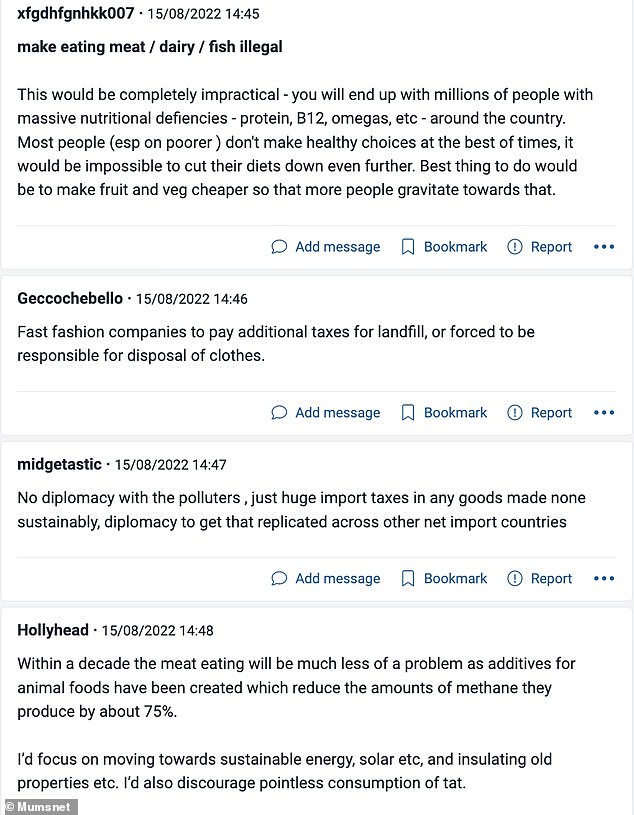 People were quick to share their ideas in a far-reaching online thread, including banning private jets and introducing additional taxes on fast fashion companies

She ended her pitch by saying she would even make ‘eating meat, dairy and fish illegal’ even though she knows that will be an unpopular opinion.

However she was quickly met with frustration from other users. One said she found banning meat and dairy impractical.

One person wrote: ‘This would be completely impractical – you will end up with millions of people with massive nutritional defiencies – protein, B12, omegas, etc – around the country.

‘Most people (esp on poorer) don’t make healthy choices at the best of times, it would be impossible to cut their diets down even further. Best thing to do would be to make fruit and veg cheaper so that more people gravitate towards that.’

Some people thought the aviation industry had a lot to answer for and even suggested people’s flights should be monitored. 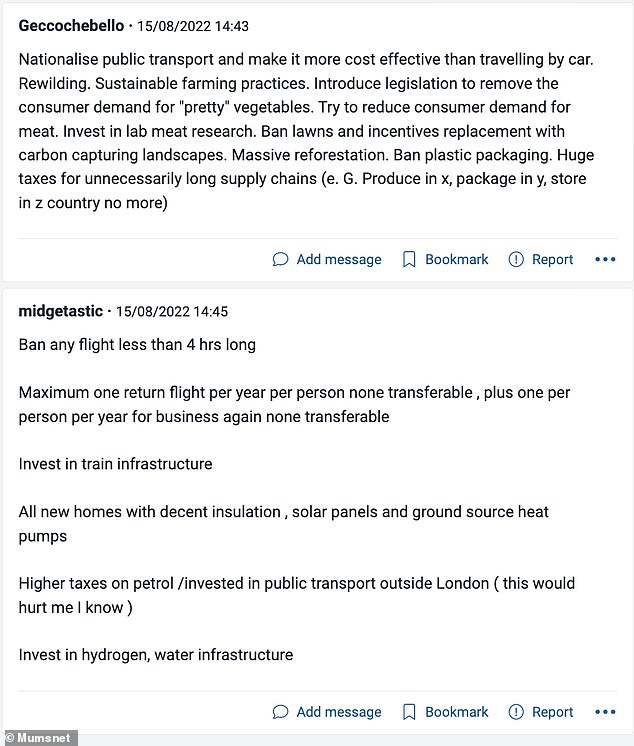 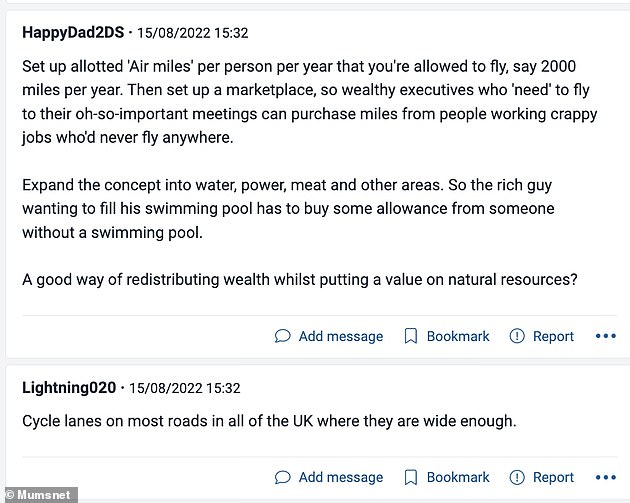 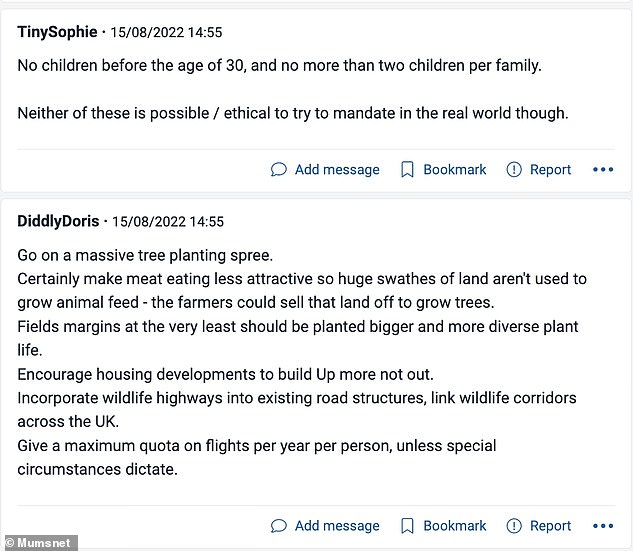 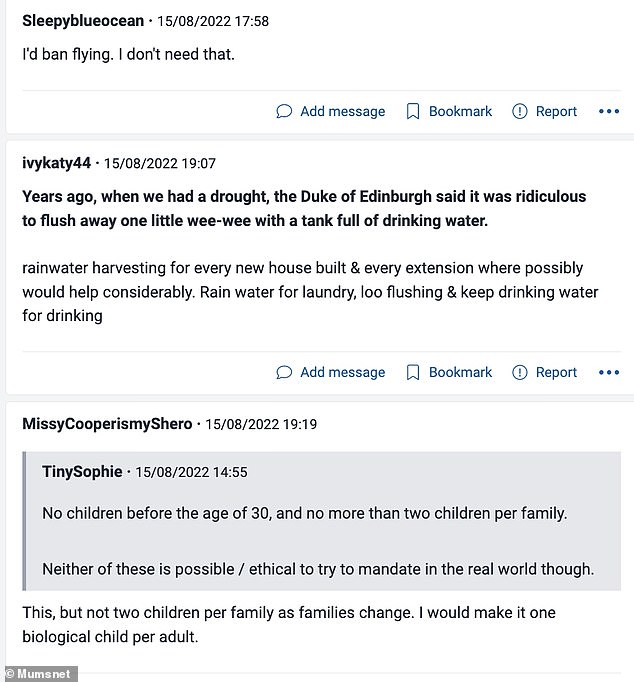 ‘Higher taxes on petrol /invested in public transport outside London ( this would hurt me I know ) Invest in hydrogen, water infrastructure.’

Another person agreed saying: ‘Set up allotted ‘Air miles’ per person per year that you’re allowed to fly, say 2000 miles per year.

Although it was just a thought experiment, some users became heated and said it sounded like a ‘controlling communist nightmare’

‘Then set up a marketplace, so wealthy executives who ‘need’ to fly to their oh-so-important meetings can purchase miles from people working cr***** jobs who’d never fly anywhere.

‘Expand the concept into water, power, meat and other areas. So the rich guy wanting to fill his swimming pool has to buy some allowance from someone without a swimming pool.’

Some thought that family planning needed to be looked at and limit how many children people can have and at what age.

One person said: ‘No children before the age of 30, and no more than two children per family.

‘Neither of these is possible / ethical to try to mandate in the real world though.’

While another agreed saying: ‘This, but not two children per family as families change. I would make it one biological child per adult.’

However another user slammed the discussion, adding: ‘Omg I’m so glad you lot are NOT in power – your utopia sounds like a communist nightmare of social control.’

08/19/2022 lifestyle Comments Off on If YOU ruled the world, how would you help climate change?
Recent Posts