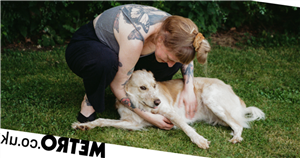 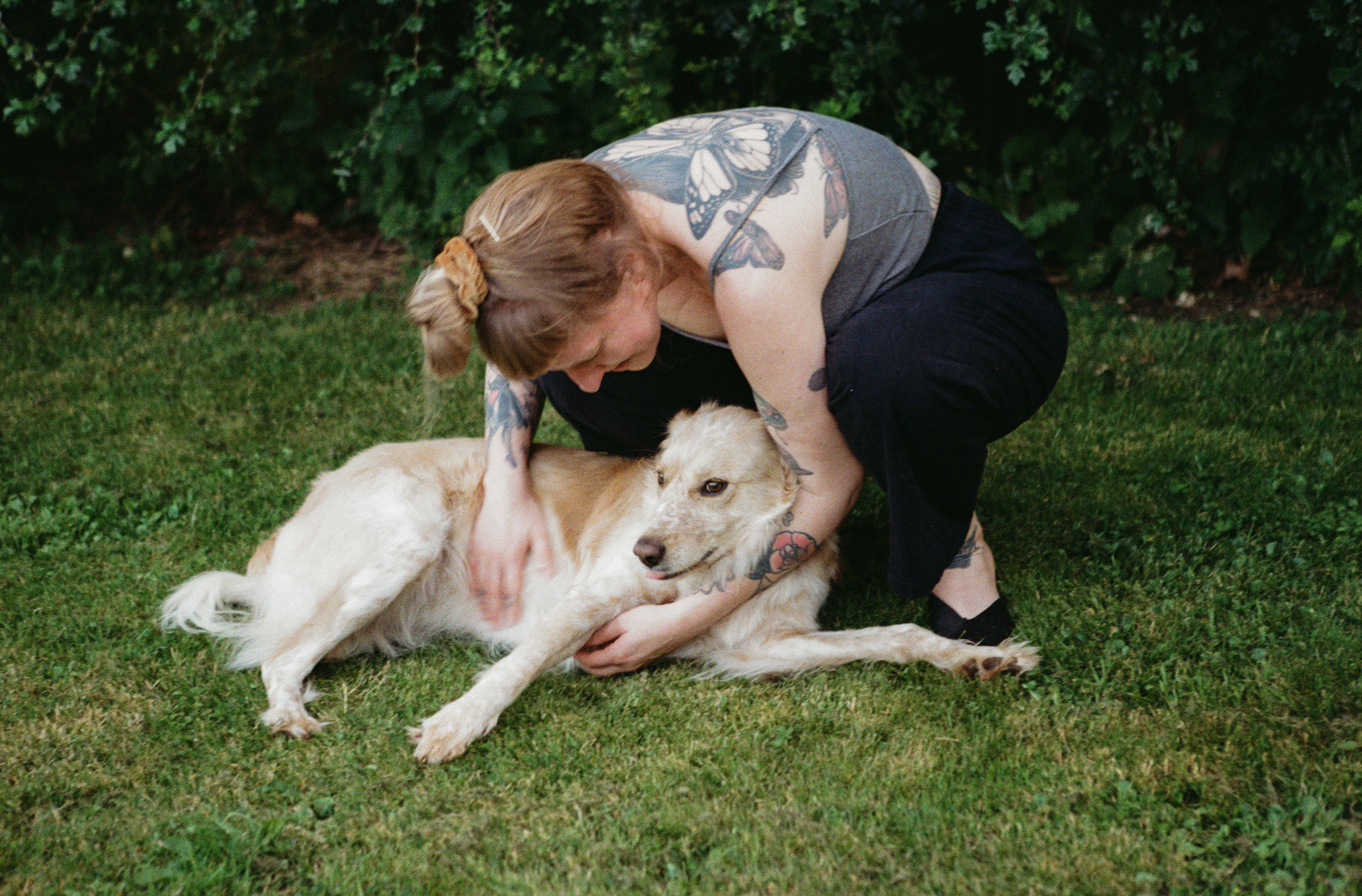 ‘Time to put on her collar,’ her fosterer gestured.

It was my husband and my fourth meeting with Lucy – the nervous stray who didn’t trust us – and we were about to bring her home.

I couldn’t sleep the night before. ‘I’m not ready,’ I’d whispered to my husband, only half out loud, only half believing it.

We’d bought Lucy a red collar, a gold disc with our details on it. I tried to fasten it, but she was so scared that she snapped at me.

I recoiled, my chest constricted. I gulped down a panic attack.

My husband took over and clipped on the lead. I don’t even know how we got her into the boot of our car, she was flailing around so much. I sat in the back while my husband drove. I could feel the heat of Lucy’s breath on my neck, smell that sour dog-breath that I’d never wanted in my life.

Being scared of dogs had been a huge thread of my personality for almost my entire life, but now, after 37 years, I was becoming an owner.

My younger sister had always been desperate for a dog. One afternoon when I was about eight, we’d bundled in the car to go to Wood Green Animal Shelter.

As we wandered around the kennels, I clung to my mum’s arm. My sister fell in love with a retriever mix named Barbara – looking back, she was sort of like Lucy.

‘I’ll run away,’ I sobbed. It’s one of those memories that’s been woven into our family history, the kind that gets recounted at dinners and get-togethers.

I’ll never forget how I felt at that moment, the all-consuming anxiety. I didn’t ‘get’ dogs because they couldn’t talk, they just bounded over and licked you like something out of a nightmare. My mum says I was a worried child – it’s a trait that’s followed me into adulthood.

On our first date 12 years ago, as we sipped beers and chatted about the lives we imagined for ourselves, my now-husband said he’d always wanted a dog.

He’d smiled wryly. It was this laidback approach to life that made me fall in love with him.

It wasn’t just dogs, it was all animals, wild unpredictable creatures that I didn’t understand.

People asked if I was bitten, whether there was a particular catalyst for my terror, but there’s no defining moment that built a fear into the core of my being.

But something must have stirred in me after that first date with my husband. A seed planted. Perhaps my fear of dogs was something I could change?

And it became a recurring topic of conversation. I was so in love with my husband, could I do it for him? I didn’t want to be a static person incapable of growth.

A promotional email landed in my inbox around five years later. Are you scared of animals? It read. You don’t have to be.

It’s how I found myself in a clinical white box of a room on Harley Street, sat opposite a guy who called himself a ‘breakthrough’ hypnotherapist. He shone a light back and forth and as I fell into a hazy sleep, I visited my childhood self to tell her not to be afraid. My fears weren’t rational. Something in me flicked.

I remember spending a weekend at my friend’s house after the session. She had a French bulldog called Alvin and I’d been petrified of him when he was a boisterous pup and had asked her to keep him away from me.

But over two days, I learnt to adore him. I fed him cheese and stroked his belly and realised he was full of love. I sent a pic of me cradling Alvin on my lap to my husband and he asked if I was joking.

We started borrowing dogs from BorrowMyDoggy. I got to know the dogs we minded and the hypnotherapy, along with my own sort of exposure therapy, started to make me realise that they weren’t out to get me.

The first dog we borrowed was Simba, who planted herself flat on the pavement and refused to budge.

The fear started to feel different. It was still there, like a flickering ember, but it didn’t consume me. We must have borrowed around 10 dogs – some just once, others we built relationships with. Instead of lumping all dogs together, I saw that each had their own unique quirks.

Gradually, I didn’t want to give the dogs I borrowed back.

Instead of crossing the road to avoid them, I’d stare longingly at ones being walked by their owners. I shared a constant stream of links to dog charities over WhatsApp to my husband. OMG, look at this one! with endless heart-eye emojis.

I hardly recognised myself.

And then there was Lucy – a shaggy blonde street dog from Greece with knots in her wispy ears and a mistrust in her eyes.

It was at the point in the pandemic when everyone was looking for a dog. All the big rescues had huge waiting lists, so I’d dug deeper to find smaller charities we couple adopt from, with the dogs that no one else seemed to want.

There was something about Lucy. Perhaps I needed a dog who was more scared than I was.

I carefully filled out the application form.

I got a phone call the next day. Would you like to come and meet her? She’d been staying at a foster home in the New Forest. During the home check and interview, I left out the fact I used to be scared.

After that fateful afternoon when we’d picked her up, the first few months were among the worst and the best of my life.

I thought I’d worked hard at overcoming it but my fear came back in flashes. I didn’t trust the creature that now lived with us.

What if a snap turned into a bite? Most of the time she did nothing to warrant my anxiety. She curled in a ball and wouldn’t even get on the bed we’d picked out.

Occasionally, she’d startle at sudden noises, which made me jump too. She was different from the dogs we’d borrowed in the past – Lucy isn’t the kind of dog you lend out.

When I was alone with her, I was on high alert whenever she moved. The fear felt like a stone lodged in my chest. I still hadn’t learnt to understand her and didn’t know her personality enough to predict what she might do.

I spent hours online, manically googling things like, ‘is it even ethically OK to own a dog?’, ‘what does it mean when dogs lie on their backs?’ and ‘will she bite me?’.

One afternoon, I heard a heaving noise coming from the garden. Lucy was being violently sick. Once she’d finished, she started lapping it up. I was so horrified I grabbed her collar to pull her away. Her face curled in anger and her teeth grazed the skin on my hand. I ran inside, tears streaming down my cheeks. What have we done?

A few weeks in, my husband went away for the weekend. ‘I don’t think I can be alone with her’, I’d pleaded. ‘You’ll be fine, you can do this. I’m proud of you,’ he assured me in that easy going way of his.

That evening, I took her for my first solo walk. I knew I had to do it. And I started to see the world through Lucy’s eyes.

She’d been brought over from another country. Shoved in the boot of a car. And now she was walking around in south London on the end of a lead held by a stranger.

She was barking because she was more terrified than I was. She’d had so many homes that she didn’t know this one was forever. I didn’t want to let her down.

That evening, I took a magical selfie of us in the golden hour. I sent it to my husband to show him I was OK.

I learnt to keep chicken in my pocket whenever we went out. Shovelling it into her mouth whenever ‘danger’ lurked – speeding mopeds that’d she’d lunge at or bikes she’d try to chase.

Dog trainers call it desensitisation, making her see that the world isn’t going to hurt her – not now she’s with us.

We expect so much from dogs. They’re told off for being dogs. When they snap, they’re seen as aggressive.

But now, I’ve learnt to read the subtleties of their language. The tucked tail and pinned back ears that mean Lucy’s unsure. The snap of her mouth is to ask someone to back off.

I’d never stopped to think about their ‘whys’.

As Lucy’s fear has ebbed away, so has mine. We’ve both learnt to trust – and the connection is beyond anything I’ve known.

Two and a half years in, and I’ve cracked open a new part of myself. I’m now a dog person. When I’m not with her, I miss her. Coming home to her wiggling bum is my most favourite thing. I bury my face into her fur and breathe in her smell and know that this is the great love story of my life. I can’t believe I got here.