I live in a "nice" area. By nice, I mean that ugly things don’t happen out in public. It’s a million-dollar suburb, and a million dollars buys your privacy and silence. That is, it did until Thursday night.

The shouting between a man and a woman started before I went to bed. I was tired. I ignored it.  They sounded young. Just a couple fighting, I thought. Then it became louder, and sounded violent. It was hard to make out the words as they passed our fence. We have a big fence. Most of the houses here have the same fences. 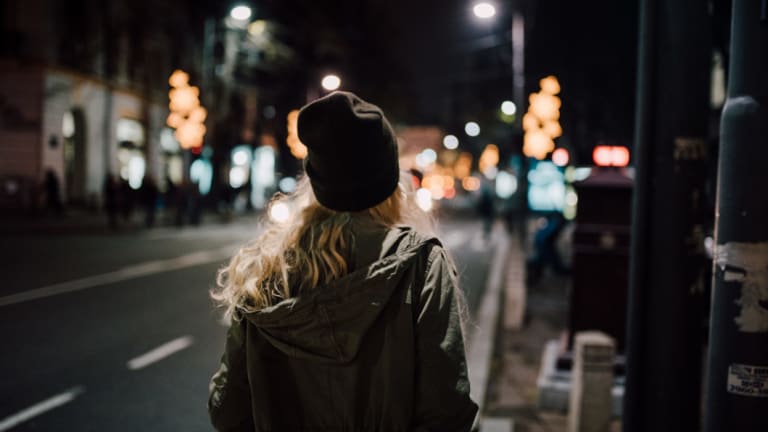 People rushed out of their homes in Kate Forster’s street when her dog was hit by a car. But when a girl was being attacked, not a curtain twitched.Credit:Stocksy

The yelling continued down the road until it was out of earshot. I was woken an hour later by the same yelling. The venom in the man's voice shot a chill through me. He called her a "c—, a waste of space, an idiot, a whore". According to him she couldn’t do anything right, and she should just "f— off". The hatred was pure, and her despair was evident. I sat up in bed and listened and then they disappeared again.

I was drifting off to sleep again when I heard a deep, guttural sobbing. I jumped out of bed and asked if she was okay. She wasn’t. She had what appeared to be all her worldly possessions with her in a suitcase and was wearing only one shoe.

I opened the gate and stepped into the battlefield in my nightgown. I sat with her. I was cold. She was cold. I offered to ring someone to come and get her. She had no one and nowhere to go, she claimed. She had left him, she stated bravely. According to statistics, it takes at least nine times for this to happen until the cycle is over, the chances are she may return.

And then I saw him, walking down the street, carrying a set of crutches. His mate arrived in a car and demanded she get in. She refused. The crutches were for her, I realised as he threw them at her. She then stood and tried to hobble up the street with her suitcase.

He looked at her disdainfully, and apologised to me for her behaviour. I didn’t know what to say. He scared me. I rang the police. My husband watched from the gate to ensure the men didn’t hurt her as she argued with them. Then the fighting escalated. I rang the police again. They were on their way, I was told.

I felt sick. She was so young.

The police arrived. I retreated to the safety of my home-bunker and my husband and I lay in bed and wondered about her.  My anger grew as I realised not one person on the street where I lived had come to help her.

Not a light had turned on. Not a curtain had twitched. People didn’t want to know. I was disgusted with my neighbourhood. I was disgusted with the people I lived next door to. When my dog was killed on the same road, the screams of my children bought out the street in droves. People came to see if we were ok. Cards were dropped in the mailbox.

When a young girl is weeping on the pavement, does she not deserve the same care? You would hate to think it was judgment that kept people away.

The sad fact is that abuse is all around us with the people we know and love. Maybe their fences are high and we can’t see in but this doesn’t mean it isn’t happening.

Denial or just ignoring it does not stop abuse.

I thought about the young shoeless girl outside my house. I always hoped that someone would help my daughter or nieces if they were in trouble. I felt let down by the world.
Be brave. Stand up. Look over your fence.