PETER OBORNE: I voted for Brexit, but claims of Russian influence are deeply troubling

Today I am asking readers to indulge me in a mental experiment. Let’s imagine that Jeremy Corbyn won last year’s General Election and became prime minister.

And let’s also imagine that soon afterwards rumours emerged that Labour’s biggest political donor was not what he seemed. And that the real source of the money was none other than Vladimir Putin’s Kremlin.

Finally, let’s imagine that last week the police made the bombshell announcement they were investigating the funding of the Labour election campaign amidst growing fears that Russian money had influenced the result. 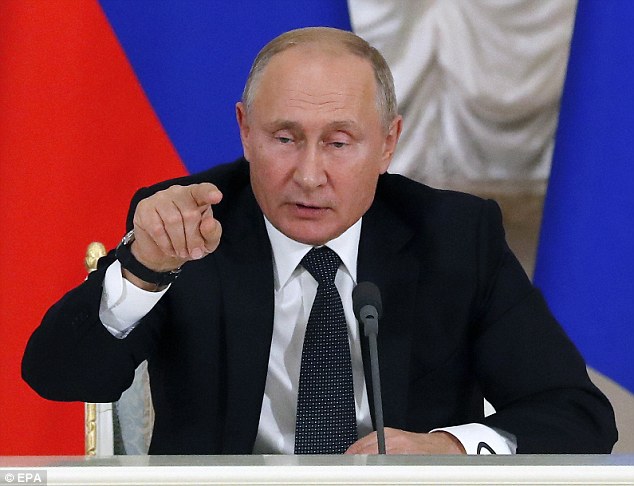 And let’s also imagine that soon afterwards rumours emerged that Labour’s biggest political donor was not what he seemed. And that the real source of the money was none other than Vladimir Putin’s Kremlin

There would be a national outcry, and outraged claims that Mr Corbyn was an instrument of the Russian regime who had stolen victory from the Tories.

No doubt some prominent Labour MPs would add their voices to the clamour.

As for Corbyn himself, the PM would face being called to the floor of the House of Commons and accused of high treason.

If the claims were proven, he would be forced to resign and a General Election would follow, uncontaminated this time by alleged dirty Russian money.

Pure fantasy? Not quite. The events of the past 48 hours have, for millions of people around the country, understandably raised burning questions about the result of the 2016 EU Referendum.

On Thursday, the National Crime Agency announced that it had launched a criminal probe into Arron Banks, the insurance tycoon, amid questions over whether Russian money was used to influence the Referendum campaign.

On Thursday, the National Crime Agency announced that it had launched a criminal probe into Arron Banks

Mr Banks put a staggering £8 million into funding the Leave Campaign, making him the largest individual political donor in British political history. Many speculate that his contribution could have swayed the result.

And now, after months of painstaking inquiries by the Electoral Commission, he is the subject of a full-scale criminal probe.

Mr Banks has always denied any claims of Russian influence or wrongdoing, and of course all of us are innocent until proven guilty.

But I believe that this investigation into Mr Banks is the most significant political event since the Referendum itself.

This is because our system of representative democracy is built around fairness. Funding for elections should be open for all to see. The laws are there to stop big money, or secret interests, from winning power.

Now, shockingly, there is a suspicion that a foreign power may have been a source of funding for the Brexit campaign.

We know that Arron Banks has enjoyed many meetings with the Russian Ambassador, Alexander Yakovenko, who allegedly sent a number of business opportunities Banks’ way.

And we also have reason to believe — thanks to an exemplary investigation by the website openDemocracy — that Arron Banks’ personal fortune may not be as substantial as he and supporters would have us believe.

So where did the money that Banks donated come from? We need to know.

I repeat that Arron Banks must be seen as completely innocent until, and unless, he is proven guilty. 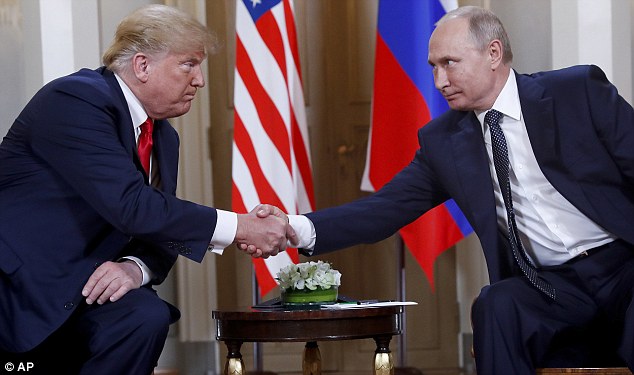 That is why, from the very start, Russia was on the side of the Brexiteers — just as Putin appears to have supported Donald Trump’s campaign in the United States

He may yet provide a convincing and entirely innocent explanation. I really hope he does — I voted for Brexit in the referendum.

But I am sure I am not alone among Brexiteers in finding allegations of Russian involvement extremely troubling.

Russia is no friend of Britain. It recently sent agents from the GRU, its military intelligence unit, to carry out a murder on British soil.

Above all, Russia has a vital national interest in sowing dissension between Britain and our allies on the continent of Europe.

That is why, from the very start, Russia was on the side of the Brexiteers — just as Putin appears to have supported Donald Trump’s campaign in the United States.

To be fair, Mr Banks was involved with Leave.EU, which was only one side of the Brexiteers’ campaign machine.

It was the provisional wing if you like, with Boris Johnson and Michael Gove’s more respectable Vote Leave campaign viewed as the mainstream.

But Leave EU was arguably more effective because it spoke more viscerally to some of the electorate, by stirring up fears over issues such as immigration, EU bureaucracy, its influence on our justice system and lack of accountability. 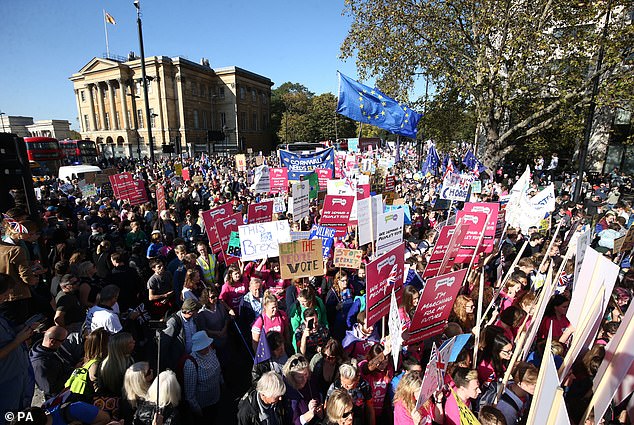 Organisers, who originally expected around 100,000 expected to attend, said 670,000 demonstrators marched the streets

Over the coming weeks, the Brexit negotiations will come to a head, so the big question this weekend is whether the new questions over the funding of the Brexit campaign will change the mood of voters.

An estimated 700,000 people marched through London two weeks ago demanding a second vote on the referendum, united in their belief that voters were told lies by Brexiteer Tories such as Johnson and Gove.

Now they have a second, and potentially far more toxic cause for concern. Was the Brexit campaign itself part bought and paid for by the Kremlin?

And if so, what does that mean for British democracy?

I am cheered by reports that David Cameron, a fundamentally decent man, wants to return to British public life.

Former prime ministers have a great deal to offer.

Sir Alex Douglas-Home, for example, who succeeded Harold Macmillan as PM in the early 1960s, was a great asset to Sir Edward Heath when he returned as Foreign Secretary after the 1970 general election. 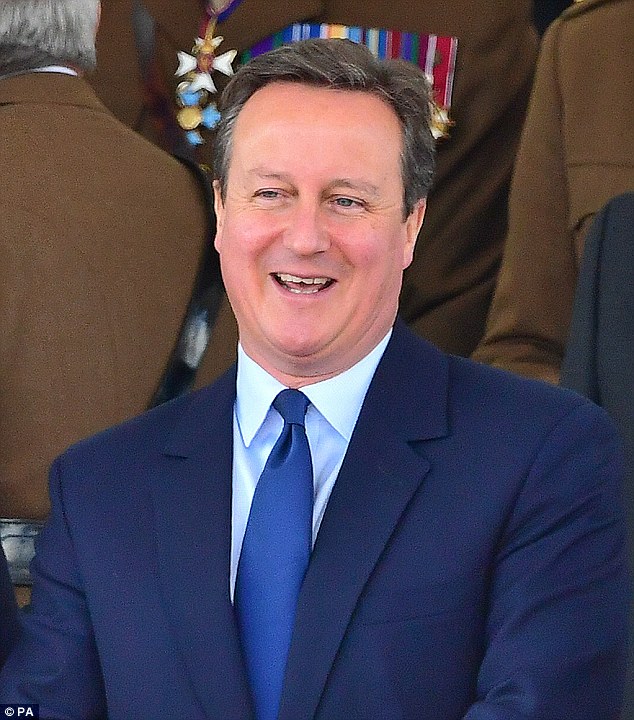 I am cheered by reports that David Cameron, a fundamentally decent man, wants to return to British public life

So I hope Cameron will return to the Commons and in due course play a role in Theresa May’s Cabinet — but not as Foreign Secretary, as has been mooted.

His intervention in Libya was a disaster, leading to seven years of bloodshed. Far better that he should concentrate on domestic politics.

He would make an admirable Education Secretary or Chancellor of the Exchequer.

Mandelson’s China tea leaves a nasty taste in the mouth

When a senior Labour figure boasts about having a tea party with a communist dictator, one naturally tends to assume that it’s a Corbynista talking. Wrong! Blairites are far worse.

Peter Mandelson has just returned from meeting China’s ruler, Xi Jinping, and a report of their encounter on the peer’s blog is a ghastly mixture of conceit and crawling. He praises Xi’s composure and his long-term vision for China.

It’s easy to be composed and have a long-term vision when you have no opposition and can order the torture of dissidents.

Lord Mandelson makes no mention of China’s abuse of human rights — a new crackdown in Tibet; more than a million Muslim Uighur people in concentration camps — or the macabre harvesting of body parts from political prisoners.

Mandelson is president of the taxpayer-funded Great Britain China Centre, which ‘promotes mutual trust and understanding’ between our two nations.

Is this really the sort of cringeing obsequiousness we want from our representative?

On Monday the United States will slap aggressive new sanctions on Iran, with the intention of driving oil exports down to zero, paralysing the Iranian economy and bringing about the collapse of the government.

I predict that this demented policy will fail. Iran will continue to trade with other countries, above all China and India.

To her great credit, Theresa May wants Britain to keep on trading with Iran. In the long run it is the United States, not Iran, that will lose most from this latest stand-off.

11/03/2018 lifestyle Comments Off on I voted for Brexit, but claims of Russian influence are troubling
Recent Posts