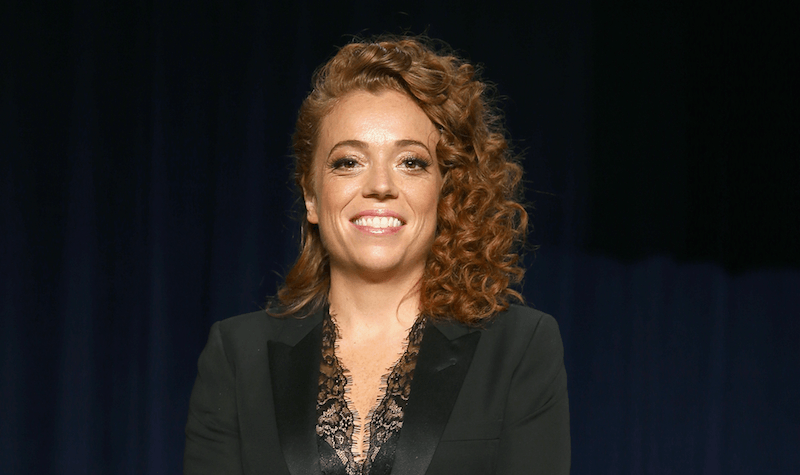 After a blistering set from Michelle Wolf in 2018, the WHCA and Trump administration are happy to eliminate the jokes entirely. | Tasos Katopodis/Getty Images

“Everyone these days is too P.C., can’t relax.”

Wait, are we talking about millennials, liberals, or the Donald Trump White House? It depends what day of the week it is, and of course who you ask. On the fifth day of the fourth week of November 2018, the familiar insults above most accurately apply to Team Trump.

But they also apply to the access-journalism elite of Washington, D.C. These supposedly warring-yet-in-reality-quite-cozy factions all agreed they were better off pulling the comedian at the White House Correspondents’ Association (WHCA) annual dinner. Instead, when it comes time for a speaker next April, the audience will find universally respected historian Ron Chernow at the podium.

Here’s how the tradition of having a comedian roast the president (and vice versa) died with the Trump administration.

Trump and Sarah Sanders didn’t like the jokes last time.

While he didn’t attend the WHCA dinner for the second straight year, Trump weighed in on the performance of headliner Michelle Wolf early the next morning. “I heard the so-called comedian really ‘bombed,’” he tweeted.

Most the criticism directed Wolf’s way stemmed from a few zingers she sent in the direction of Sarah Sanders, Trump’s press secretary. “She burns facts and then she uses that ash to create a perfect smoky eye,” Wolf said to uncomfortable (and in some cases howling) laughter. “Maybe she’s born with it, maybe it’s lies… It’s probably lies.”

In another punch that landed square, Wolf described Sanders as “Uncle Tom, but for white women who disappoint other white women.” Sanders, who had sat stone-faced through dinner (including the awards presentations), stayed that way during Wolf’s set. Later, she fashioned a condescending tone in reaction.

“I hope that [Wolf] can find some of the same happiness that we all have,” Sanders said, “because I think she may need a little more of that in her life, ’cause the rest of us here are doing great.”

(If there’s one thing we know about Trump’s White House, it’s how happy everyone is to be there!)

NYT’s Maggie Haberman and others sided with the White House. 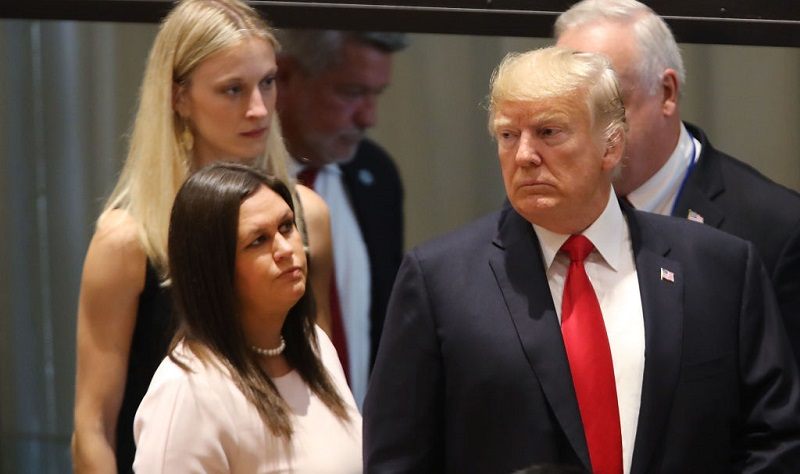 Trump and Sanders had a hard time taking a joke. | Spencer Platt/Getty Images

The New York Times’ Maggie Haberman has been criticized often for her approach to covering the White House. Following the April WHCA dinner, she took to Twitter to back Sanders.

“That [Sanders] sat and absorbed intense criticism of her physical appearance, her job performance, and so forth, instead of walking out, on national television, was impressive,” she said. Of course, that ignored the substance of Wolf’s joke (i.e., lying), but it allowed Haberman to keep her relationship with sources intact.

Other TV personalities, including Mika Brzezinski from “Morning Joe,” took a similar tone. “Watching a wife and mother be humiliated on national television for her looks is deplorable,” she tweeted. Again, it seemed like everyone missed the part about the lying and focused on a makeup style.

Or did they? As Wolf noted, the press likely had the biggest problem with what she said about many of the journalists in the room (Haberman and Brzezinski included).

“You guys love breaking news, and you did it,” she said. “You broke the news. You helped create this monster, and now you’re profiting off of him.”

Politico, WaPo, and other outlets complained.

As the Washington Post pointed out, every WHCA event depends on the contributions of the press outlets themselves. (They pay for the tables.) So when the publisher of Politico, world headquarters of access journalism, said he was (suddenly) uncomfortable with a comedian doing the event, WHCA planners turned to Chernow.

Washington Post publisher Fred Ryan also stated his preference for someone who wouldn’t roast the president, his family, and his administration. “It shouldn’t be about cutting humor but about journalism,” Ryan said. Again, this might seem sudden after several decades of comedians roasting the room without any crying.

After the news broke, Wolf took to Twitter to singe what’s left of the WHCA’s credibility. “The WHCA are cowards,” she wrote. “The media is complicit. And I couldn’t be prouder.”

Chernow will likely address the origins of the Bill of Rights and the First Amendment (including freedom of speech and freedom of the press). However, in light of the White House recently pulling the press pass of CNN’s Jim Acosta, couldn’t that also become a theme Trump doesn’t like?

Just as journalists broke the news, Wolf may have broken the WHCA dinner. In the case of the the latter, it’s about time.