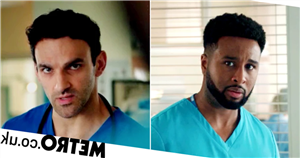 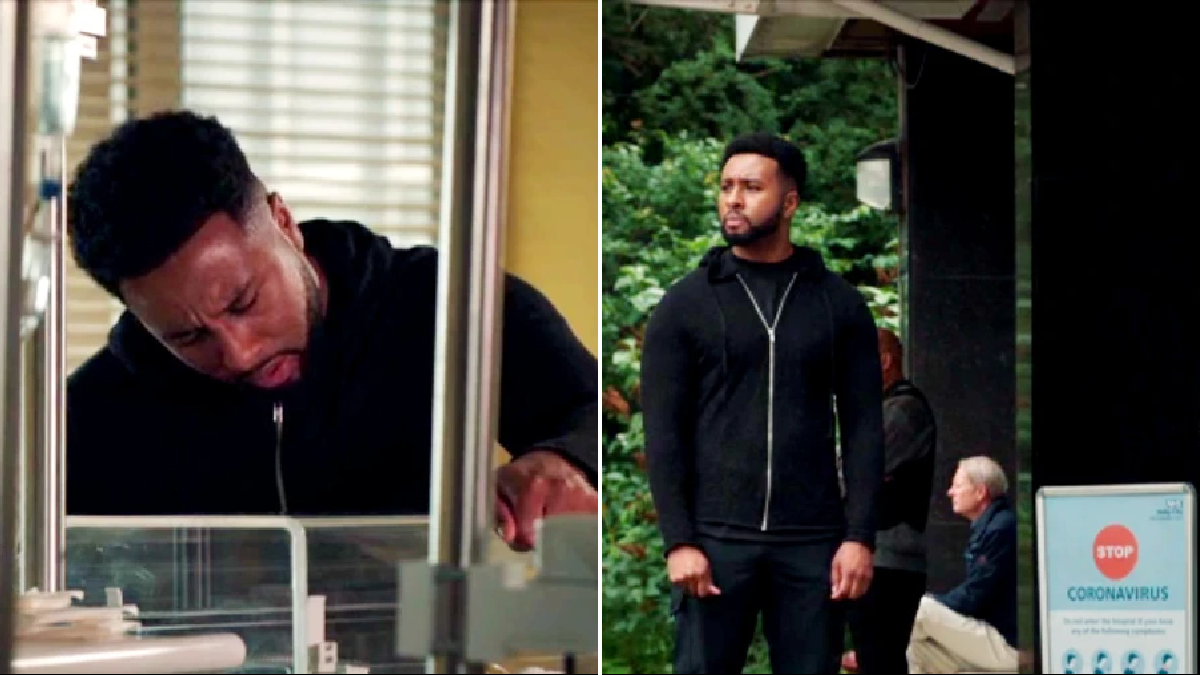 It’s been a bit of a mystery in recent episodes of Holby City – what past health problem did Josh Hudson (Trieve Blackwood-Cambridge) experience in his past? Each time his mum Elaine (Carol Walton) has appeared she’s been anxiously asking him about his health – and not just in the general way that mums fuss over their children.

Tonight we discovered that he used to suffer from bulimia, and despite assuring Elaine that all’s well we know that Josh has been avoiding meals, and using caffeine pills in an effort to stay awake and focused. The rigours of being a junior doctor on a cardiac surgical ward – one that’s run by Jac Naylor (Rosie Marcel) too – and being the father of premature twins are taking their toll on him, and at several points in this episode we saw him close to collapse. Will he be able to seek help before he gets completely overwhelmed?

Elsewhere we had the very welcome return of Oliver Valentine (James Anderson) to Holby. His meeting with Jac in the hospital garden was particularly good value and his response to her asking him how his head was: ‘Still more aesthetically pleasing than yours,’ showed that his sense of humour is as good as it ever was.

But could he handle the emotional strain of being back in the place where he got shot in the head by Hanssen (Guy Henry)’s son Fredrik? Writer Rebekah Harrison used the memorial to Raf Di Lucca, which stands in the hospital garden, as a device to explore Ollie’s feelings.

Raf was killed in the same shooting incident, and when Ollie saw someone spraying graffiti on the memorial he chased her. When he came across her on the wards her glib attitude to what she’d done made him react so emotionally that Hanssen was a bit concerned.

Later on, Ollie was able to save the life of the same girl when she collapsed outside, thus proving he’s still a doctor at heart. Hanssen has offered to give him a trial shift, and if that goes well – which presumably it will – Ollie will return to the wards as Hanssen’s mentee.

Will he be able to show Lucky Simpson (Vineeta Rishi) that a good life is possible after a life-changing injury? He’ll need to act fast, because Lucky is currently absolutely certain that she wants to die rather than face a future in a wheelchair. This is a desperately sad story which Vineeta Rishi is playing beautifully. When Kylie (Amy Murphy) asked Lucky for advice about her upcoming court case, we saw a glimpse of Lucky’s former professional self, ready with good advice and support.

That might have been a clue that there was hope for her, but the sight of a photograph of herself in the wheelchair was enough to have her once again asking Max (Jo Martin) to help her die – and she says she’ll find a way to do it even if Max refuses.

Sue Haasler is the author of five novels and the official BBC Holby City book, which you can read about here.

Find out more about eating disorders by clicking on this link to the BEAT Eating Disorder website.

You can seek help for an eating disorder by calling the BEAT helpline on 0808 801 0677. Find more support and further contact numbers here.