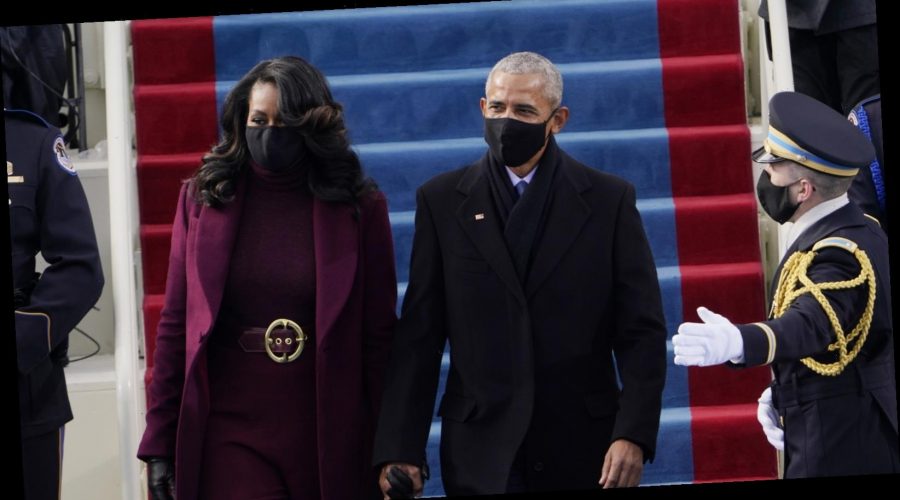 Michelle Obama attended Joe Biden’s inauguration in style. Obama may not be a big fan of politics (via CNN). That doesn’t mean she doesn’t know how to make a statement. Her all burgundy getup, by the Black designer, Sergio Hudson, looked like the living incarnation of a hallelujah moment. That’s hardly surprising, given that, as Town and Country points out, Hudson designs for the likes of Rihanna. (Or, maybe Michelle Obama’s BFF Beyoncé recommended Hudson to her?) “Optics governed more or less everything in the political world, and I factored this into every outfit,” Obama wrote in her memoir, Becoming (via Elle).

During her time as first lady, Michelle Obama learned to work her image. She became an icon, and we loved her for it. Which makes it no surprise that Today thinks that the former first lady’s belt “stole the show” on inauguration day. But if you were also paying attention to what Obama has to say, you’ll know that she didn’t bother to mince words.

This is what Michelle Obama felt about Biden's inauguration

Before attending Biden’s inauguration, Michelle Obama posted her reflection on Instagram. “After a disturbing era of chaos and division, we are entering the next chapter of American leadership with the inauguration of @JoeBiden and @KamalaHarris,” she wrote. “Right now, I’m feeling more than just relief at putting the past four years behind us. I’m feeling genuinely hopeful for what’s to come.” Obama further reflected, “It feels like we might finally be getting some momentum … we can once again start thinking about building the future we want for ourselves and our children.”

Michelle Obama’s words were immediately met with a barrage of hoorays from her Instagram followers. Meanwhile, Obama’s husband (you might know him, he’s called Barack?) celebrated the inauguration by fist-bumping Kamala Harris (as per CNN‘s reporting) and posting a picture of his own on Instagram. In it, he and President Biden are walking arm in arm in The White House. “Congratulations to my friend, President @JoeBiden! This is your time,” Obama wrote.