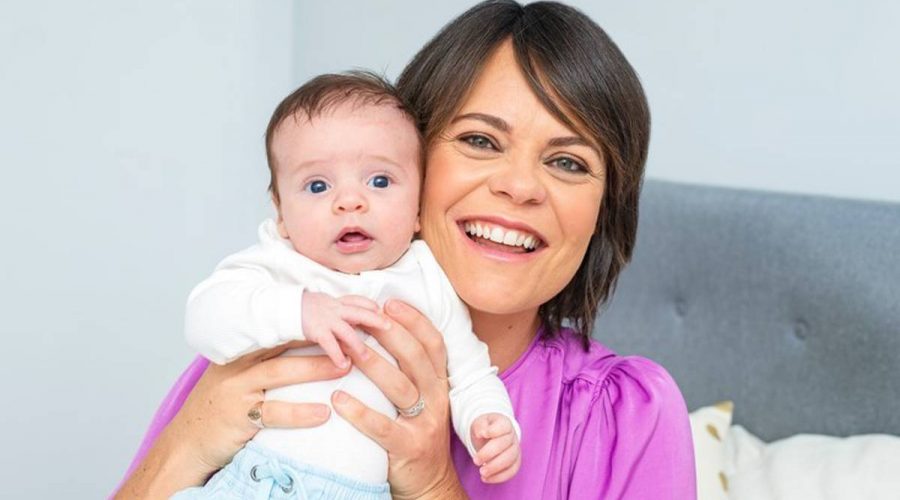 As she talks on the phone, Iggy can be heard gurgling and fussing, as six-week-old babies do, and occasionally Heather, 37, will talk to him and settle him expertly.

“He’s been a really good baby,” she says in the voice she uses to talk to him – soft, gentle and smooth. She is obviously very in love.

“When I looked at him after he was born, I thought, ‘Of course you look like that because that is what you are supposed to look like! You’re just beautiful,'” she recalls.

“When you look at your baby and he looks like you and the person you love the most, you just can’t imagine that he should look like anything else.”

The person Heather loves most in the world is her husband, political journalist Barry Soper. He has five adult children, but this is Heather’s first and she says she feels so lucky to have him helping her.

“I remember after Iggy was born, it was such a marathon and I was pretty wiped out.

I watched Barry dealing with the midwife and weighing him, and he was cleaning him and dressing him, and I thought, ‘Thank God you are here because I couldn’t do this without you.’ I just knew that he was in safe hands and I could relax.

“I love that we are doing this 50/50. I feel really blessed that he’s had all that experience so that I can leave Iggy with him, knowing that Barry’s there and has been from the very beginning for our boy.”

Iggy arrived into the world on February 26 at 8.15am, weighing 3.58kg or about eight pounds in the old system, after a labour which started the night before at 10.30pm. Heather was induced at 40 weeks and the labour was 10 hours and fairly smooth, she says.

“Thank God I got the epidural,” she laughs. “That’s all that I’m going to say about that. I did the hard yards for five hours and then got the help. I went into hospital wanting an epidural straight away, not realising that you had to do a bit of work first and save it for the really tough stuff.”

Heather admits she tried really hard not to be one of those women you see in the movies who projects all their pain on to their poor husband.

“But when you have a contraction, it’s such an overpowering feeling that you just go blank and it’s the only thing going on,” she shares. “At one stage, Barry put his hand around my wrist to try to comfort me and I was like, ‘Get rid of it!'”

As for the experience of delivering a baby, Heather recalls emerging from her labour feeling empowered.

“I know billions of women have done it, but you’re never sure if you can do it yourself. And then you do it and I just felt so much like a champion. Then I looked back and I know that we are definitely the stronger gender. Men think they’ve got all that upper body strength, but they couldn’t handle what we do!”

Heather said she had her labour induced because that was Iggy’s due date and she didn’t want to muck around.

“I love my baby very much but he is not going to dictate the terms,” she insists. “I was ready to have him and so we did, thank you very much!”

And there is Heather’s NewstalkZB voice of authority, determination and knowledge. There is no doubt that Heather will use it with Iggy when she needs to as he gets older.

But at this stage, it’s just love and adoration for her baby boy.

“He’s a really good baby and so advanced, which is what all parents say. Like any baby, he has his moments but he’s not colicky or much of a crier,” she says with pride. “We’ve already had laughs and smiles, which is so beautiful.

“There was that moment when I had just come out of the shower and I looked into the room and he was awake. He looked at me and smiled because he saw me, and I thought, ‘That’s it. I’ll do whatever you need.'”

Iggy’s full name is Finbar Ignatius Pieter du Plessis-Soper, which is a lot longer than simple Iggy, but he has been Iggy since conception as a “working title”, says Heather.

The new mum explains that Finbar is Irish/Gaelic for Barry because they decided years and years ago that if they had a boy that would be such a nice name.

“Then his next names are Ignatius and Pieter, which is spelled the Afrikaans way because we managed to visit my granny just before Covid but sadly she died of Covid last year.

“On that visit to South Africa, the last time I saw her, she said that if I ever had a boy, I had to use those two family names. Apparently, Ignatius is very common in my family down through the generations. So that’s where he got those from to honour my granny.

“And the surnames du Plessis and Soper are because we’re modern and want to combine my surname on my mum’s side and Barry’s surname.”

Heather has been breast-feeding, which she says is hard work because she needed to get Iggy used to a bottle for when she goes back to work.

“So if I’m not pinned to the couch feeding him, then I’m pinned to the couch expressing milk, and then you’ve got the sterilising of the bottles and this and that, and it takes up a lot of your time, but it’s worth it, especially when you think there is Omicron around and I want him to be as super- healthy as possible.”

Heather will go back to work to host her Newstalk ZB Drive show on April 26, when Iggy is two months old. It’s a decision she’s thought long and hard about, and consulted with everyone from her boss to her midwife.

“A lot of friends who are mums have said that’s too early, so I really agonised over it,” she admits. “But in the end, it came down to the fact that yes, it’s okay to do that.”
Heather will leave Iggy with Barry, who will be at home with him from midday until early evening when Heather returns from work.

“He’s going to have his Dad, his other parent, with him at home and that’ll be a really special time for the two of them. Obviously, it wasn’t an easy decision to make, but Barry and I are happy with it,” she tells.

Heather and Barry moved to Wellington for Iggy’s birth, and felt so loved and supported by their friends and family there. But her job needs her to be in the NewstalkZB Auckland studio, so at the end of the year the trio will make the move north.

Barry has recently changed his job from NewstalkZB political editor, based in Wellington, to that of senior political correspondent, which will allow him to live in Auckland.

“We’ve been married for 13 years, and four of those have been spent with me in Auckland and him in Wellington, and it’s horrible and impossible to do with a little one.

“So the decision has been made that we will live together in the same city, which is a huge treat for me,” she says excitedly.

Heather says Barry will be able to spend a lot of time with his wife and baby, “which is great because Barry is already Iggy’s favourite person”, she grins. “Barry gets all kinds of smiles and laughs out of Iggy. The pair of them are gorgeous together.”

Heather has also been for a few runs already to help her body get back into gear, but she says she’s not overdoing it.

“I’ve got to make sure I save some calories for the breastmilk supply, but I started doing exercise a couple of days after Iggy was born because it’s really important for your mental health. Barry and I head out for walks with Iggy a lot.”

The couple have also had a date night where Heather’s mother Elizabeth came down from Auckland and looked after Iggy while they went out to dinner.

“And that was a great test for me,” she confides. “I wasn’t worried because I knew he was in good hands and Barry and I spent the whole date talking about Iggy. But we trusted my mum to look after him and that’s what it comes down to really – whether you trust the person you leave your baby with.”

The arrival of Iggy is something Heather always planned and talked to Barry about early in their relationship.

“I told him that I would want to have children at some stage. I’ve never been a particularly clucky person, but I always knew that it would be something that I would really like to do later on,” she tells.

“And then I was surprised how I reacted when they called me to say our baby was a boy – I just burst into tears. We had been calling the baby Iggy even before we knew he was a boy. And I kept on saying to Barry, ‘He’s an Iggy, we’ve got an Iggy!’

“I never imagined that I would be emotionally connected to it. I’ve just been blown away by how much you can love your little baby.”

Heather is not discounting more babies, although she says it will involve some negotiation.

“About 30 minutes after I had given birth, I felt so incredible, I said to Barry, ‘I could go another round.’ We’ll see.”