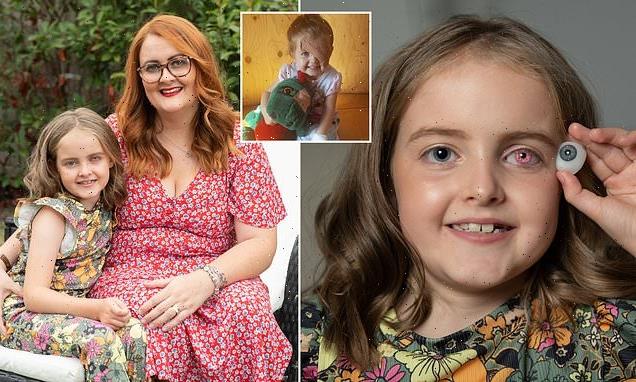 Schoolgirl, eight, who lost an eye to cancer aged two reveals she’s upgraded her blue prosthetic lens to a sparkly pink one – and her friends say she looks ‘like a superhero’

A schoolgirl says she can’t wait to show off her new sparkly, pink prosthetic eye when term starts next week – after she lost her own eye to cancer as a toddler.

Daisy Passfield, eight, from Hertfordshire was diagnosed with a grade D tumour in her retina when she was just 14 months old.

The then tot had chemotherapy to shrink the tumour but two months after chemotherapy, it began growing back, forcing doctors to remove her right eye completely.

Daisy underwent a four-hour operation months later; her family had hoped a newer procedure, designed to disintegrate the tumour would work, but traces of it were left and, fearing it would grow, they opted to have Daisy’s eye removed. 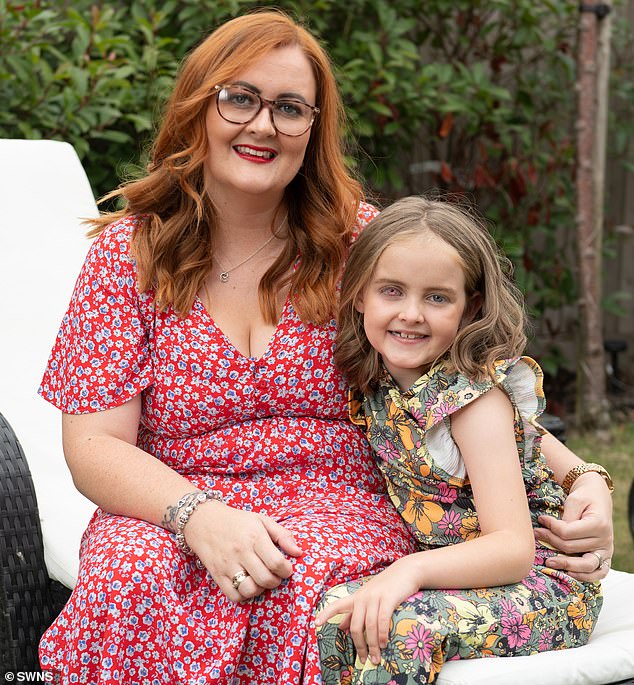 Daisy Passfield, eight, from Hertfordshire was diagnosed with a grade D tumour in her retina when she was 14 months old – she underwent surgery at the age of two to remove her eye, and has worn a prosthetic one since 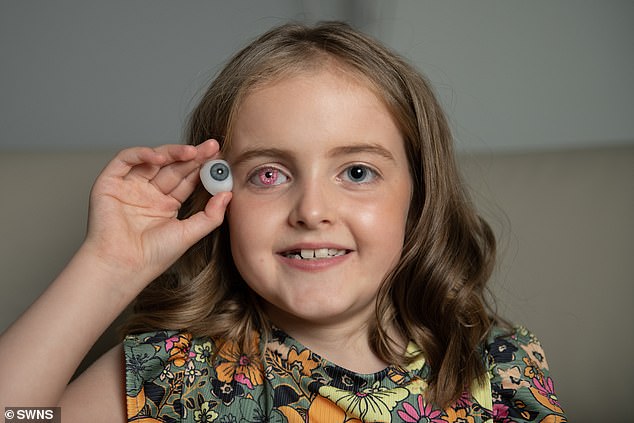 New look! The schoolgirl says she decided to get a more glamorous prosthetic, switching out her old blue one for a more sparkly pink one 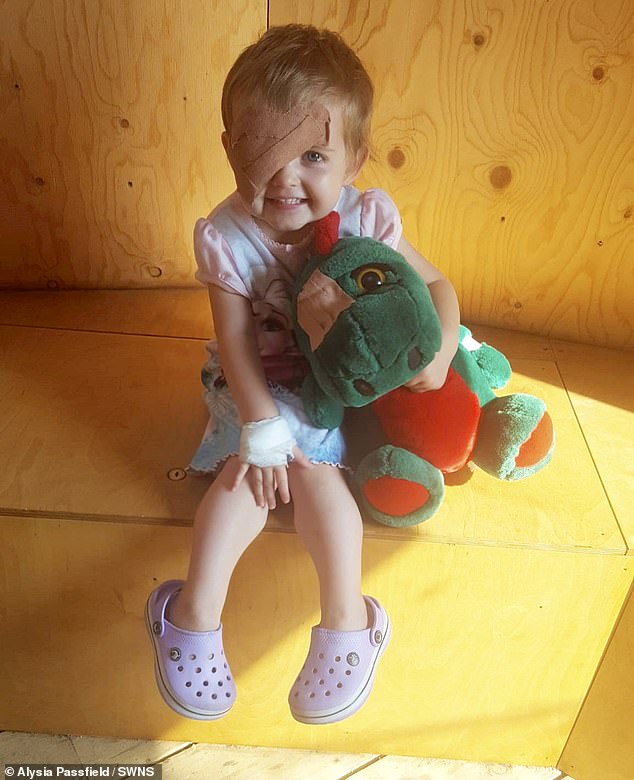 Daisy’s mother, Alysia, noticed her eye appeared white on photographs taken with a flash – and her daughter was diagnosed with retinoblastoma soon afterwards

The eight-year-old originally chose a blue prosthetic eye but this year decided to add a little glamour to her look.

The confident schoolgirl surprised her family and doctors by asking to have a new eye in her favourite colour – pink glitter.

Now she’s proud to show off her ‘superhero’ eye which pals say looks befitting of a unicorn or a dragon – much to Daisy’s delight.

Daisy, from Abbots Langley, Hertfordshire, said: ‘I feel happy because everyone can see my pink sparkly eye. I am so excited to show everyone at school my sparkly eye.

‘I think they will love it just like I do. Everyone I have spoken to has said how lovely it is.

She says that she’s already been told by fans of her new eye that she looks like she has ‘a superhero eye, a dragon’s eye and a unicorn eye’, saying ‘I like all those things.’

Daisy’s mum, Alysia Passfield, 30, said it was ‘tough’ trying to get a diagnosis for Daisy’s condition.

Alysia said that she noticed there was something wrong with Daisy while looking at a picture of her. She said: ‘I noticed from a photograph – she had a white glow in her eye and her eye had a glaze on it’

The most common symptoms are a white glow in eye or pupil in dim lighting or when a photo is taken using a flash, and a squint. 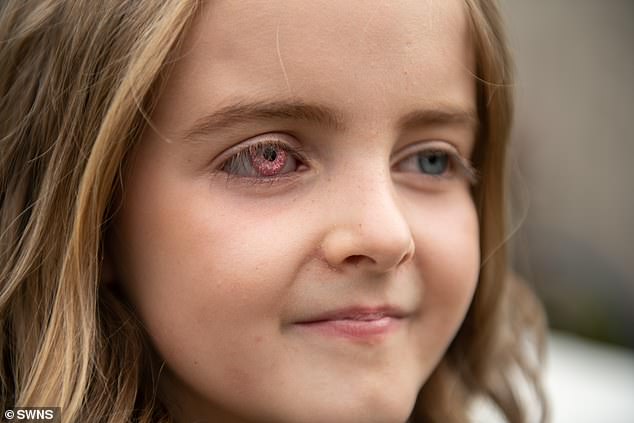 Chemotherapy to remove the tumour was unsuccessful and Daisy’s parents decided that it would be safer to remove her eye (Pictured: Daisy with her new prosthetic)

She was diagnosed with retinoblastoma – a rare and aggressive form of eye cancer that affects babies and young children, mainly under the age of six – in October 2015.

Alysia said she was ‘relieved’ to finally have a diagnosis, and added: ‘I knew there was something wrong.

‘Obviously I was upset and in a bit of a shock. Daisy was absolutely fine, she took it in her stride, and she has six rounds of chemotherapy to try to shrink the tumour.’

Unfortunately, Daisy relapsed two months after her chemotherapy ended and started intra arterial chemotherapy – a newer procedure which is meant to shrink the tumour.

Intra arterial chemotherapy is a new method of delivering chemotherapy drugs directly to the eye rather than around the body.

Daisy was given a general anaesthetic for the treatment, which involved passing a catheter through the femoral artery, all the way up until it is in the ophthalmic artery.

Once the catheter is in place the chemotherapy drug is administered via the tube and is able to work directly on the tumour/tumours in the eye. 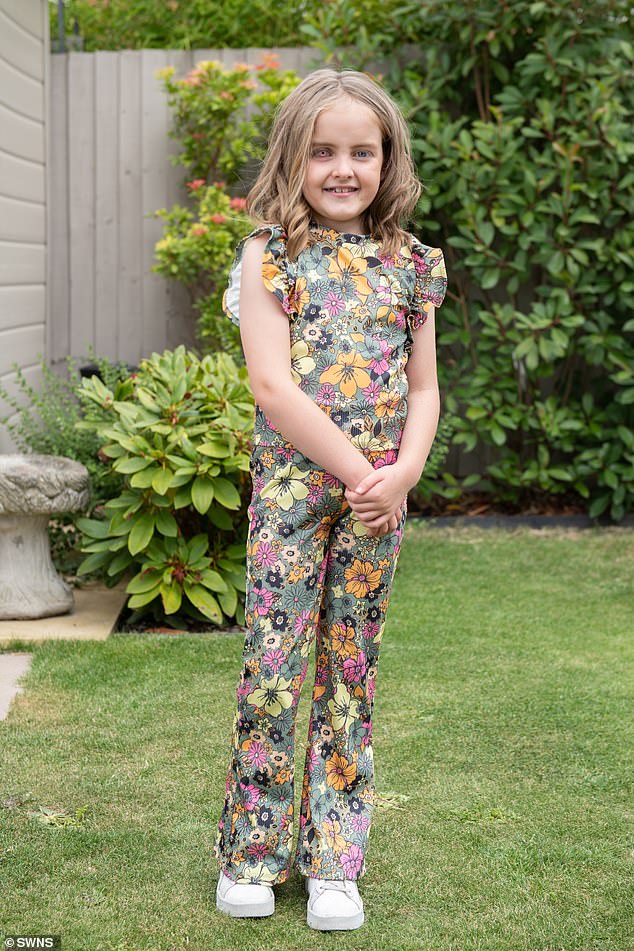 Retinoblastoma is specifically a cancer of the retina, which is the light-sensitive lining at the back of the eye – around 50 children in the UK develop the condition every year

Instead of shrinking the tumour, the treatment had broken the tumour into different parts.

Alysia said: ‘By September 2016, we made the decision to remove her eye, because the chemo that she had, had broken the tumour into different parts and we didn’t want the tumour to spread.’

The operation lasted around four hours and Alysia said she was on ‘autopilot’ throughout.

After the operation, Daisy was given a blue eye matching her natural eye colour.

Daisy got her new eye on July 28, 22. Alysia said: ‘Daisy has always been into sparkly things, make-up and making herself look pretty.

‘We went to our appointment, I said to the woman about Daisy having a different coloured eye and they said they can do that.’

Retinoblastoma is a rare type of eye cancer that usually affects children under the age of five.

As it is usually caught early in the UK, 98 per cent of children with the disease are successfully treated.

About 50 children develop the condition every year in Britain.

It affects up to 300 youngsters annually in the US.

Retinoblastoma is specifically a cancer of the retina, which is the light-sensitive lining at the back of the eye.

It can affect one or both eyes.

A fault gene is responsible in about 40 per cent of cases. This can be inherited from the sufferer’s parents or may occur spontaneously.

The most common symptoms are the pupil looking like a cat’s eye and the child developing a squint.

The cat eye look is most commonly seen in photos.

Small tumours can usually be treated with laser or freezing treatment.

Alysia said that Daisy has lives a ‘completely normal’ life. She said: ‘She is one of the most confident people I have ever met.

‘The only thing she can’t do is drive a combine harvester or fly a plane but I don’t think we have to ever worry about that happening.’

Daisy has an older sister called Immy Rose, 10, and brother Oakley, four. Alysia said Immy was ‘very caring’ and added: ‘She was one of the most helpful children when we went through it.’

Reflecting on how Daisy’s diagnosis affected her, Alysia said: ‘I don’t really know – it was one of those things where you just have to get through.

Childhood Eye Cancer Trust says 50 cases are diagnosed a year in the UK – or one child a week. It represents 3% of all childhood cancers and 10% of cancers in babies under the age of one in the UK.

08/28/2022 lifestyle Comments Off on Girl, 8, who lost an eye to cancer replaces it with sparkly prosthetic
Recent Posts