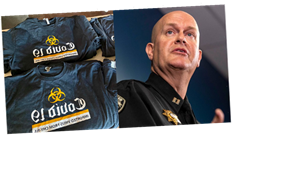 Less than a day after eight people were shot and killed at Atlanta-area spas — 6 of them Asian women — a Georgia official told reporters the mass shooting suspect was having a “bad day.”  Now that official is drawing scrutiny for Facebook posts appearing to belong to him that promoted a T-shirt with racist language about China and COVID-19.

“He was pretty much fed up and kind of at the end of his rope. Yesterday was a really bad day for him and this is what he did,” Cherokee County sheriff’s office Director of Communications Jay Baker said Wednesday during a news briefing, while explaining the alleged motives of 21-year-old Robert Aaron Long, currently in custody for the Tuesday night shooting rampage.

Officials, however, said the suspect has sex addiction issues, targeting the spas to “take out that temptation.”

“All of us have experienced bad days. But we don’t go to three Asian businesses and shoot up Asian employees,” California Representative Ted Lieu tweeted following the news conference. He urged the FBI to conduct an independent investigation.

Just hours after the briefing, internet sleuths uncovered Baker’s apparent Facebook posts from April 2020, which appear to show him purchasing and promoting a t-shirt that called COVID-19 an “IMPORTED VIRUS FROM CHY-NA.”

“Love my shirt! Get yours while they last,” one post reads. The shirt appears to echo former President Donald Trump’s characterization of COVID-19 as the “China Virus” and “Kung Flu.”

At the time of the posts, Asian Americans were already voicing fears of an increase in crime against the community due to the racist rhetoric surrounding the pandemic.

According to The Associated Press, the account for “Jay Baker,” which was deleted Wednesday night, featured several photos of Cherokee County sheriff’s Captain Jay Baker going back months, including one in which he is in uniform outside the sheriff’s office.

The posts surfaced as many in the Asian American community expressed concern that the shooting is not being treated as a hate crime. Countless members of the community have said the department does not appear to be able to conduct a fair investigation.

“To see this post is both disturbing and outrageous. It speaks to the structural racism that we’re all up against,” Vincent Pan, co-executive director of Chinese for Affirmative Action, a civil rights organization working to address anti-Asian hate crimes, told AP. “Coupled with the comments coming out of the news conference, it does not give community members confidence that our experiences and the pain and the suffering that we’re feeling are being taken seriously, at least by this particular person.”

Baker and the sheriff’s office did not immediately respond to CBS News’ request for comment.

Vice President Kamala Harris, who is the first South Asian American woman to be elected to that office, said she and President Biden “grieve for the loss” following the mass shooting.

“I do want to say to our Asian American community that we stand with you and understand how this has frightened and shocked and outraged all people,” she said.

Just four days before the attacks, Mr. Biden condemned the rise in hate crimes against Asian Americans in his first prime-time address to the nation.

“Too often, we’ve turned against one another,” he said. “Vicious hate crimes against Asian Americans, who have been attacked, harassed, blamed and scapegoated.”