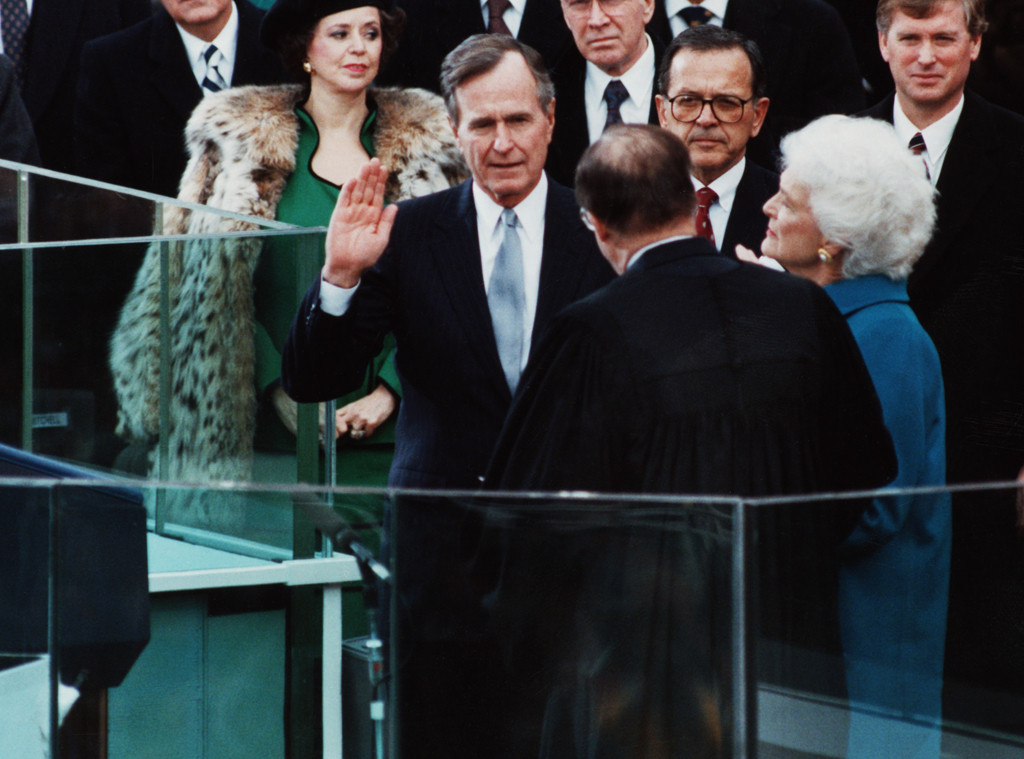 Former President George Herbert Walker Bush, whose family name has been synonymous with politics for more than half a century, has died. He was 94.

George W. Bush released the following statement after his father’s passing was announced: “Jeb, Neil, Marvin, Doro, and I are saddened to announce that after 94 remarkable years, our dear Dad has died. George H. W. Bush was a man of the highest character and the best dad a son or daughter could ask for. The entire Bush family is deeply grateful for 41’s life and love, for the compassion of those who have cared and prayed for Dad, and for the condolences of our friends and fellow citizens.”

His wife of 73 years, Barbara Bush, died on April 17 at the age of 92. As the mourners filed into Houston’s St. Martin’s Episcopal Church for her funeral on April 21, Bush greeted everyone individually from the wheelchair he’s been largely confined to since a diagnosis of Parkinson’s disease. He also wore socks with a book pattern, a nod to Barbara’s lifelong commitment to family literacy. 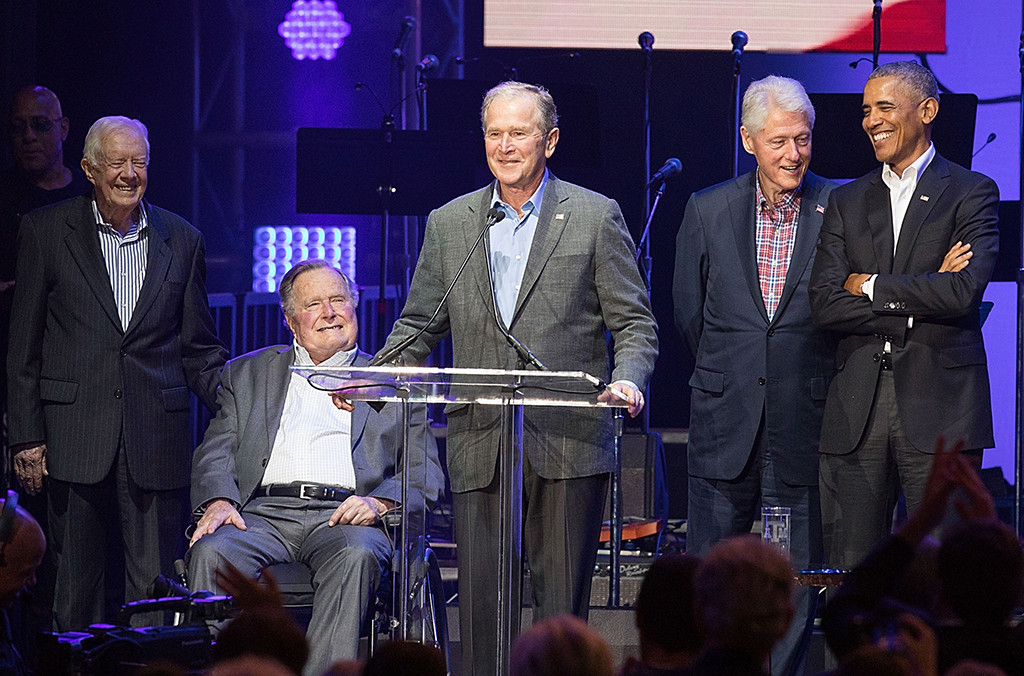 The next day he was hospitalized with an infection.

Bush, who served as 41st president of the United States from 1989 to 1993 after serving as director of the CIA and then Ronald Reagan‘s vice president for two terms, was the oldest living former president and vice president; the father of President George W. Bush and former presidential candidate and Florida Gov. Jeb Bush; and the reigning patriarch of a dynasty that has served at state and federal levels of government since 1952 (including his own father, who also served in the U.S. Senate).

He also joined John Adams, 175 years later, as the only U.S. president ever to have a son go on to be president as well.

In what became an increasingly rare occurrence of the years, Bush last gathered with all of the rest of his fellow living former presidents—his son, Barack Obama, Bill Clinton and Jimmy Carter—in October at Texas A&M’s Reed Arena for a fundraiser to benefit those affected by hurricanes in Texas, Florida, Puerto Rico and the U.S. Virgin Islands.

“Aging’s all right—better than the alternative, which is not being here,” Bush, chipper at 88, told Today correspondent and granddaughter Jenna Bush Hager in 2012. 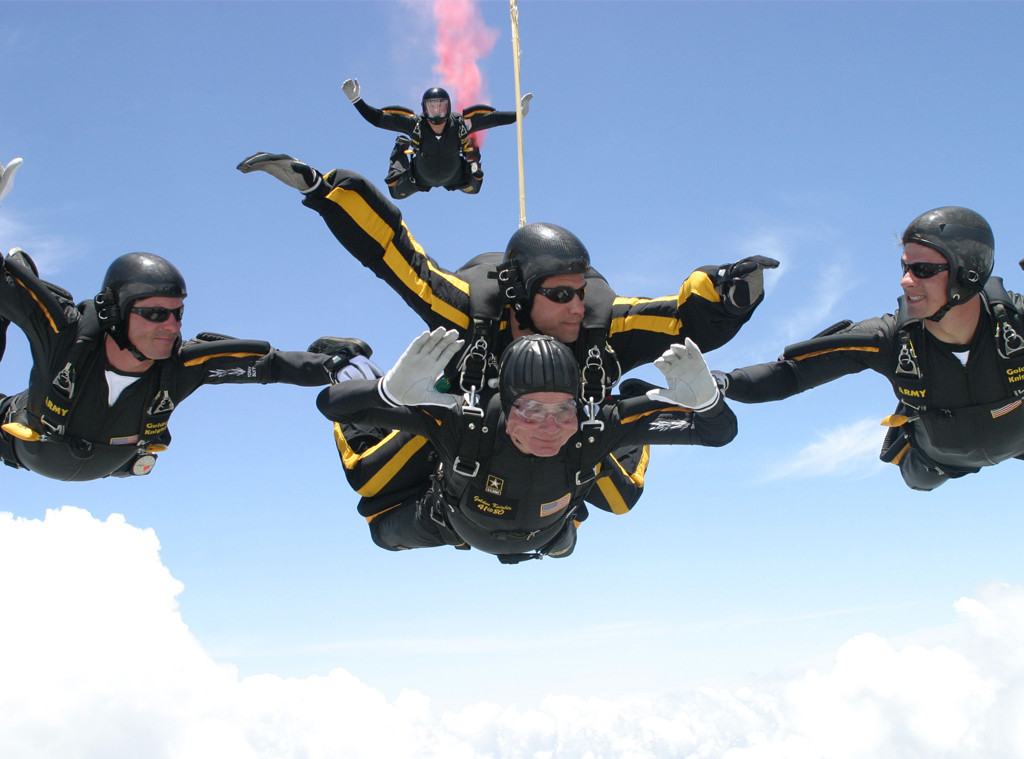 A life-long lover of the sea, having grown up summering at his family’s waterfront estate in Kennebunkport, Maine, Bush remained an avid boater. The intrepid elder statesman also charmed subsequent generations with his celebratory skydiving excursions for his 80th, 85th and 90th birthdays. Three months after suffering a severe neck injury in a fall in 2015, a 91-year-old Bush, wearing a neck brace, threw out the ceremonial first pitch at a Houston Astros game.

He did the coin toss before the start of the 2017 Super Bowl and he and Barbara also made it to Game 5 of the World Series last year.

Bush was also inducted into the World Golf Hall of Fame for overall lifetime achievement. 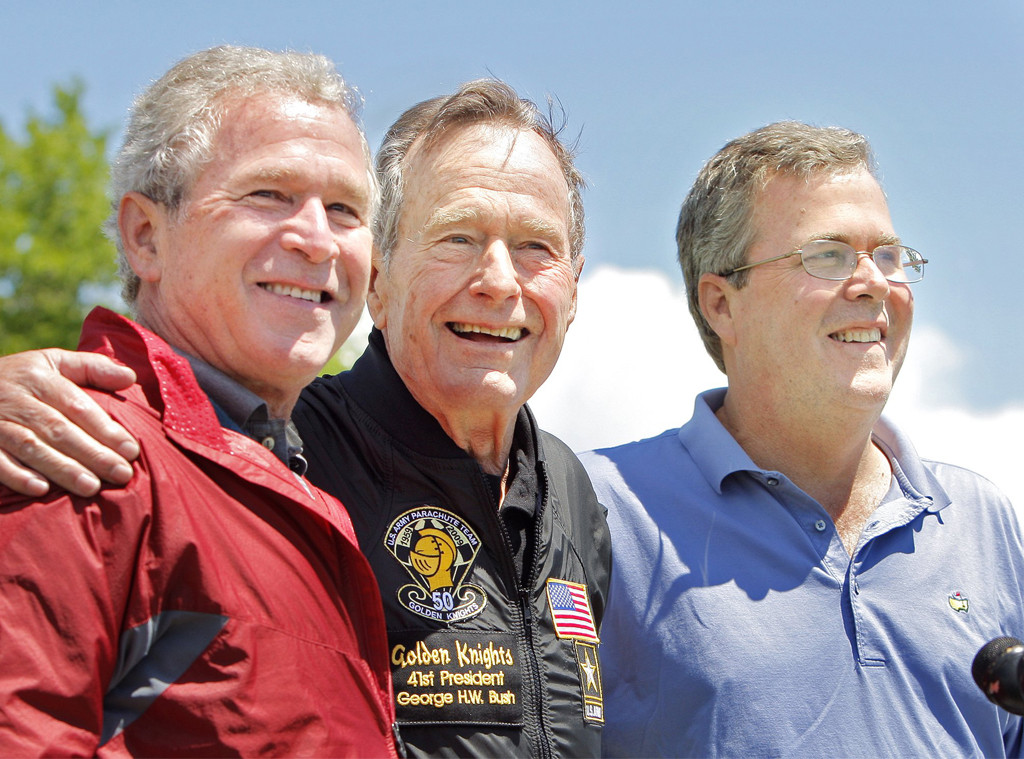 Though officially out of politics himself since losing the 1992 presidential election to Bill Clinton, Bush served as informal adviser and confidante to both George W. and Jeb as they sought higher office, and was making headlines up until recently for his refusal to endorse now president-elect Donald Trump.

Bush—who had just been elected when the Berlin Wall came down and was president when the Soviet Union collapsed, effectively ending the Cold War—presided over the first Gulf War, when U.S. troops were sent to drive Saddam Hussein‘s Iraqi army out of Kuwait.

Despite protests in the moment, hindsight has worked in Bush’s favor—particularly the part where the United States didn’t end up occupying a foreign country for years. Rather, Operation Desert Storm lasted approximately seven months.

In the 2015 biography Destiny and Power: The American Odyssey of George Herbert Walker Bush by Jon Meacham, it was said that Bush 41 (the only modern-era ex-president to not write a full-length memoir) criticized his son George W. for brazenly flexing U.S. power on the world stage as president and kowtowing too much to Vice President Dick Cheney and Defense Secretary Donald Rumsfeld.

The elder Bush was in poor health when Meacham was interviewing him for the book, the author recalled at a public forum in 2015, but, “this is a man who turned on the tape recorder and told the truth. Even when he was having the worst possible day he would talk himself back into the game.”

At another talk as part of the Council on Foreign Relations’ “Lessons From History” Series, Meacham said that he thought the 41st president’s legacy was a sound one. 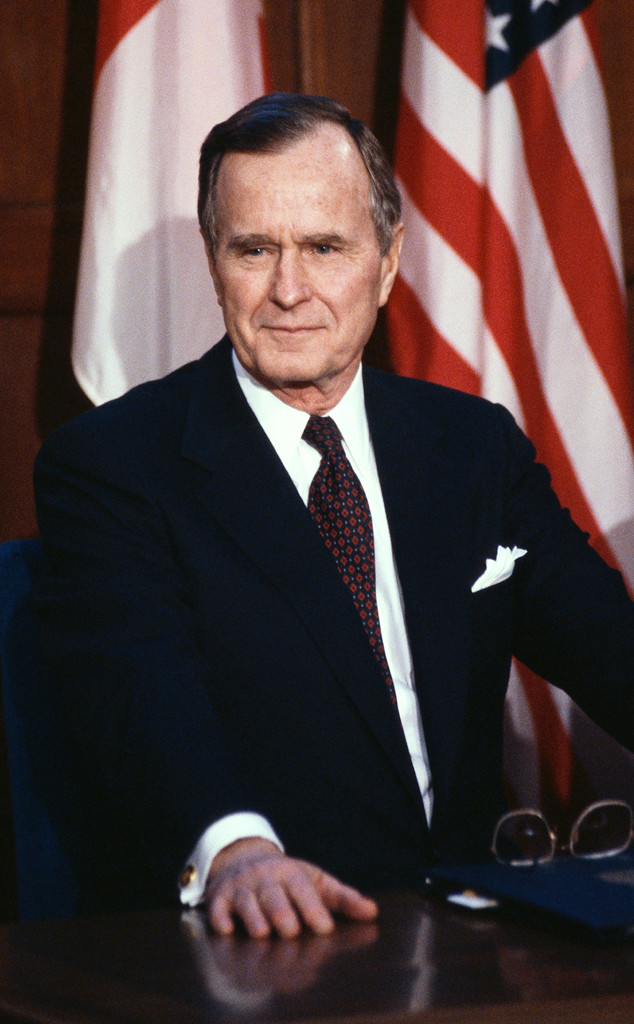 “I do think he was a transformative president,” Meacham, also the author of biographies on Thomas Jefferson and Andrew Jackson, said. “He packed eight years of action into four—any one of a crisis in the vein of a Tiananmen Square, of a Gulf War, the end of the Soviet Union, fall of the Berlin Wall, negotiation of NAFTA; on the domestic side, the Americans with Disabilities Act, the Clean Air Act, the 1990 budget deal, which set up the prosperity of the 1990s, which Bill Clinton will tell you at length—which is redundant, I realize—[pause for laughter, according to the transcript]—but he will make that case. It was a—I think it was a consequential presidency.”

In 1988, Bush was elected president over Democratic Sen. Michael Dukakis of Massachusetts after a hard-fought campaign that painted Dukakis as soft on crime and promised tax relief for all.

“Read my lips, no new taxes,” which Bush said when he accepted his party’s nomination at the Republican National Convention, became the most repeated, cited and mocked line of his entire presidency—even though he uttered it before he was elected.

But that same address was also famously the “thousand points of light” speech, a phrase he would use time and again to stress the importance of public service. 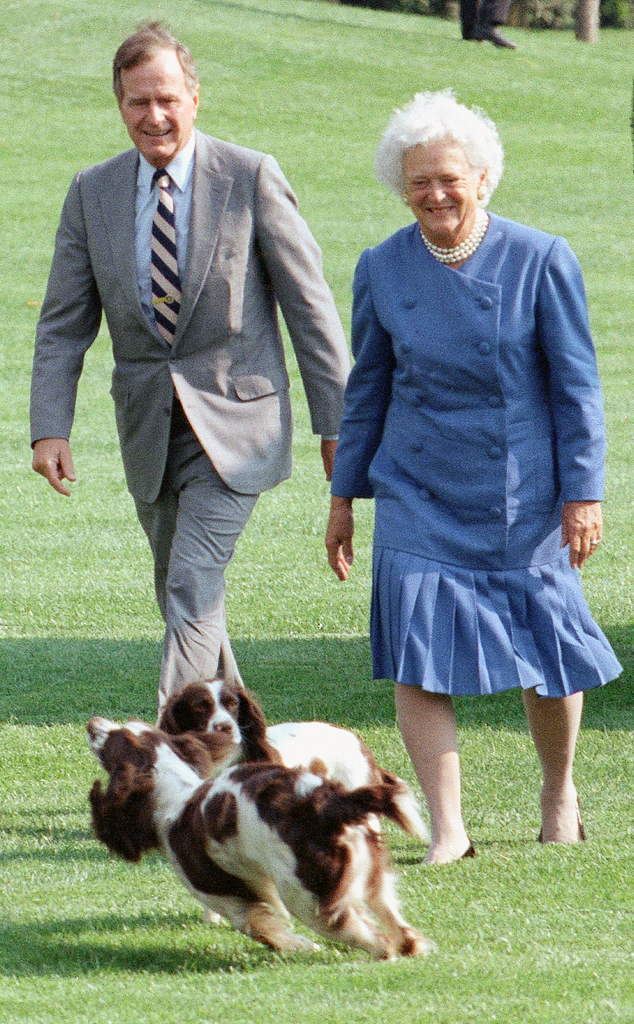 “We can find meaning and reward by serving some purpose higher than ourselves—a shining purpose, the illumination of a thousand points of light,” Bush said in his 1991 State of the Union address. “It is expressed by all who know the irresistible force of a child’s hand, of a friend who stands by you and stays there—a volunteer’s generous gesture, an idea that is simply right.”

He would go on to honor people with the Daily Point of Light Award nearly every day of his presidency—a legacy President Obama celebrated in a 2013 ceremony at the White House attended by Bush, wife Barbara and their son Neil Bush.

“You’ve described for us those thousand points of light—all the people and organizations spread out all across the country who are like stars brightening the lives of those around them,” Obama said, addressing his predecessor. “But given the humility that’s defined your life, I suspect it’s harder for you to see something that’s clear to everybody else around you, and that’s how bright a light you shine –how your vision and example have illuminated the path for so many others, how your love of service has kindled a similar love in the hearts of millions here at home and around the world.  And, frankly, just the fact that you’re such a gentleman and such a good and kind person I think helps to reinforce that spirit of service.”

“It’s like coming home for Barbara and me, with the rest of you,” Bush said. “Just coming to this magnificent house and being greeted by this superb hospitality— knows no bounds.”

Bush was born June 12, 1924, in Milton, Mass., to Prescott Bush, a Wall Street banker who served as a U.S. Senator representing Connecticut from 1952-1963, and Dorothy Walker Bush, a deeply religious woman who is said to have shaped her son George’s nature from an early age.

Bush grew up in Connecticut and attended high school at the private Phillips Academy in Andover, Mass. After turning 18 and graduating from Andover he enlisted in the Navy and served as an aviator in World War II. While home on leave from duty in the Pacific in 1945, he married his teen sweetheart, publishing scion Barbara Pierce, whom he had met at a country club dance in Greenwich, Conn. 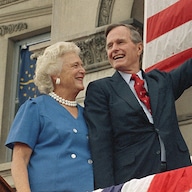 Inside Barbara Bush and George H.W. Bush’s Epic Love Story: How a Christmas Dance Led to a Dynasty

“She was wild about him,” Bush’s brother Jonathan told Vanity Fair in 1992. “And for George, if anyone wants to be wild about him, it’s fine with him.”

Or, as George’s mother, Dorothy, reportedly put it: The couple were “sensible and well suited to each other.” Either way, Barbara would become a fiercely devoted wife and, eventually, the family matriarch whose grandmotherly appearance and fondness for traditionally domestic activities belied a steely protectiveness of her family’s reputation.

Once back home, the newlywed Bush enrolled at Yale, where he played baseball and became a member of the infamous Skull and Bones secret society, like his father before him. After graduation, he and Barbara moved their young family to Texas, where Bush went into the oil business and became a millionaire by 40. He got his start in politics as the Chairman of the Republican Party for Harris County, Texas, then was elected to the House of Representatives in 1966.

Though early opponents would paint him as a right-wing extremist, his record would ultimately prove more moderate and not entirely unprogressive. As a member of Congress, he voted in favor of the Civil Rights Act of 1968 and broke with his party in supporting a woman’s right to use birth control. 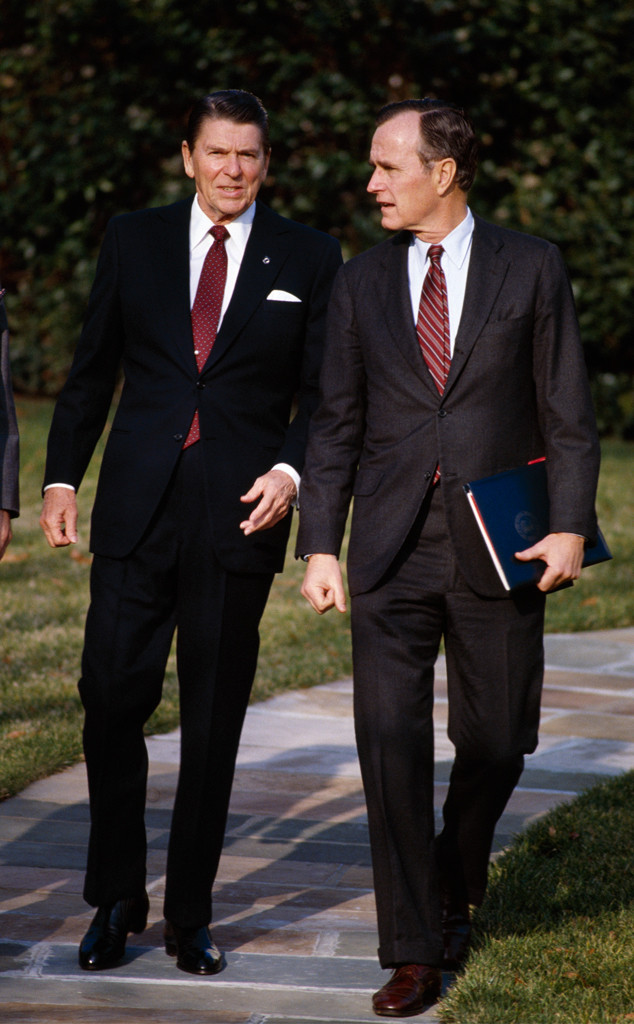 After two unsuccessful runs for the Senate, Bush turned his sights upward: He served as Ambassador to the United Nations from 1971 to 1973 and Chairman of the Republican National Committee from 1973-1974 for Richard Nixon; then as envoy to China between 1974 and 1975 and director of the CIA under Gerald Ford. When Carter was elected, he returned to Houston to chair the First International Bank.

Bush first ran for president in 1980, but he ultimately became Reagan’s running mate. Eight years later, promising a continuation of the rose-colored Reagan years, Bush became the first sitting vice president to ascend to the presidency since Martin Van Buren in 1836.

Ironically, Van Buren was also a one-term president. Despite aforementioned accomplishments and foreign policy success that temporarily sent his approval ratings sky high, Bush left office with the economy mired in a recession—which, at the end of the day, was what voters cared about.

Bush was said to have been extremely disappointed by his loss to Bill Clinton in 1992. 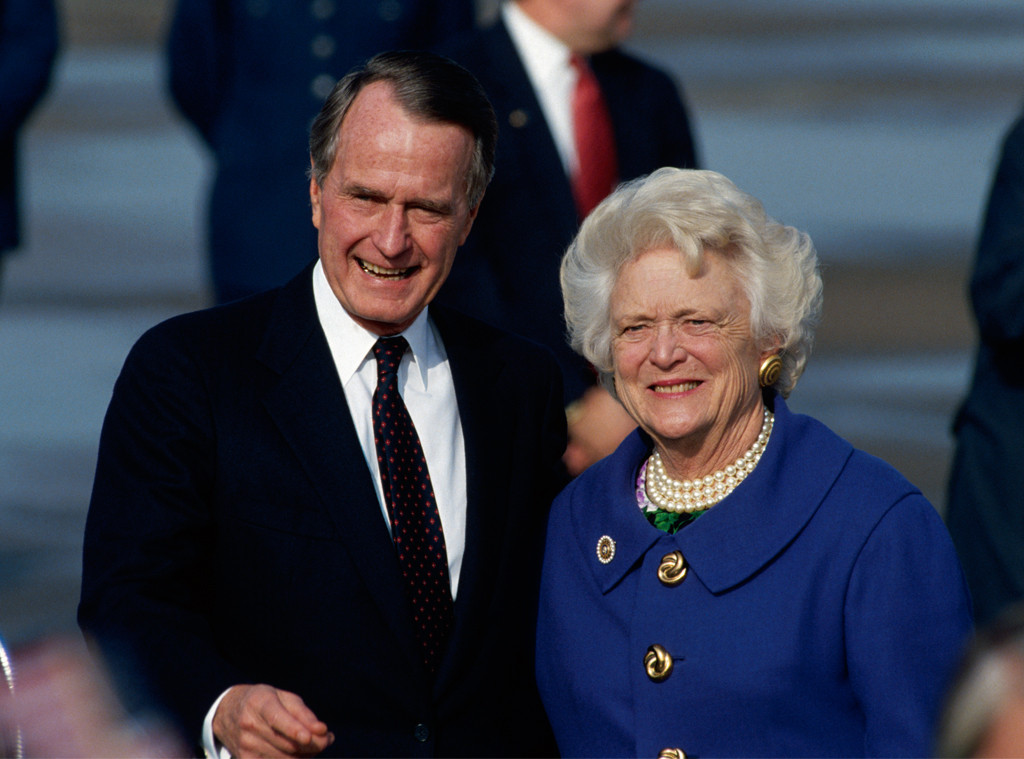 “A terrible feeling,” he admitted in 2012 in his Today interview with granddaughter Jenna. “An awful feeling. I really wanted to win and worked hard, and later on people said, ‘Well he didn’t really care’—which is crazy. I worked my heart out and it was terrible to adjust, but then you figure, ‘Well, life goes on.’ Do what the next challenge is.”

Asked what he wanted his legacy to be, he said, “Well, I want somebody else to define the legacy. I’ve kind of banned the use of the L-word, the legacy word. I think history will get right to point out the things I did wrong and perhaps some of the things we did right.”

As for his seven-decade marriage to Barbara, Bush said, “It’s been a challenge and a reward. She’s the number-one person in my life. In the family she calls all the shots. She’s a wonder.” And should she predecease him, he said, she’d be the first person he sought out in heaven.