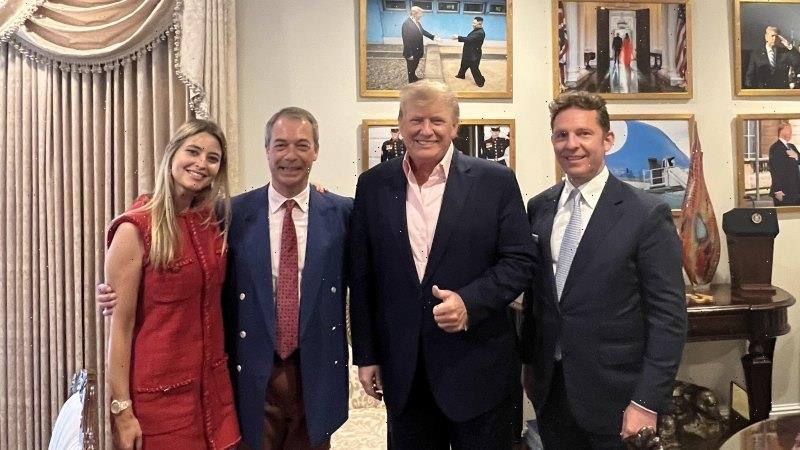 They say the brightest stars burn twice as fast, and in the early 2000s few shone brighter than Holly Valance.

She’s been absent from our cultural landscape for the past few years (she slowly burned out rather than going full supernova), but rather dramatically burst back onto the scene this weekend after posing for a photo with former US president Donald Trump and right-wing former British politician Nigel Farage. 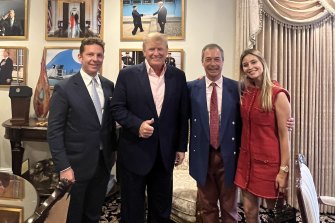 If you’re currently scratching your head and wondering “What? That Holly Valance?” then join the club. Before we get to the how and why, let’s quickly refresh on the who.

Remind me, why was Holly Valance a big deal?
Valance joined the cast of Neighbours in 1999, injecting some much-needed edge to Erinsborough. Just 16 at the time, she stole the show as rebellious school girl Felicity ‘Flick’ Scully, earning her a Logie nomination for most popular new female talent in 2000.

As well as her natural affinity for acting, Valance soon discovered she had been struck with the most enviable of curses: she was a soap star who could sing.

Like Kylie Minogue before her (and Delta Goodrem just after), Valance released a debut album, Footprints, in 2002 while still starring on Neighbours. The lead single off the album, Kiss Kiss, was a Euro-banger everyone could get around (and everyone did). The song earned four ARIA nominations in 2002, including highest selling single, helping cement Valance’s status as a star.

It didn’t hurt that Kiss Kiss was accompanied by the kind of sweat-heavy film clip that seemed to define every music video shot between 2000 and 2005.

A couple more hit singles followed, each more suggestive than the last (Down Boy followed by Naughty Girl), but by 2003, the dream was over. Valance quit Neighbours, stopped making music and dropped off the grid. Well, kind of. 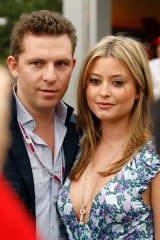 In 2004, she moved to Los Angeles and bounced around the TV circuit, appearing in CSI: Miami, CSI: NY, Entourage and Prison Break. There were also a few forgettable film roles, including starring alongside Paris Hilton in 2006’s Pledge This! (0 per cent on Rotten Tomatoes).

What’s she been up to since her music and acting career burned out?
It hasn’t all been bad news for the former actress. In 2012, she married billionaire British property developer Nick Candy in Beverly Hills, and the couple now have two children.

But she’s remained a fringe figure, the type of celebrity whose Google News results are populated with articles like: What ever happened to Holly Valance? and Remember Holly Valance? You’ll never guess what she’s up to now!

But you really would never guess what she’s been up to recently.

So, what was she doing with Donald Trump?
Over the weekend the 38-year-old roared back into relevance by appearing in a photo with Farage, Trump, and her husband.

Farage posted the picture on Twitter, which showed the group hanging out at Trump’s Mar-a-Lago estate – presumably talking about the possibility of a Trump comeback and whether Toadie meant to kill Dee on their wedding day by driving off a cliff.

The photo itself is both intriguing and off-putting, the best and worst thing Valance has appeared in since Pledge This!. Composition wise, it has the air of a famous person posing with a bunch of competition winners. Write 25 words on your favourite impeachment, and you can meet former president Trump!

Trump thrusts out an obligatory thumbs up while the others crowd around. Nick Candy is a billionaire who recently attempted to buy Chelsea Football Club for a rumoured £2.5 billion, but here he looks like a starstruck teenager, just happy to be included.

Almost more interesting than the people in the photo is what hangs behind them on the wall of Trump’s office. Naturally, the 75-year-old has a framed snap of his historic meeting with North Korean leader Kim Jong-un and a picture of himself saluting.

The response on social media to Valance appearing in the photo has been one of bemused bafflement and nostalgia-driven disappointment. How could Flick Scully stoop this low? What State of Mind must she be in?

Of course, it’s worth remembering that being photographed with politicians is far from an endorsement of their ideals, but also, you must be prepared for the inevitable blowback.

Why is Holly Valance hanging out with Trump and Farage?
So far, scant details have been revealed explaining why exactly this meeting took place. Candy is a prominent donor to the Conservative Party in the UK, which Farage is a former member of.

Is Valance’s husband foreshadowing a political shift? Did the couple just happen to be in town? Is he hoping to pick up real estate tips from Trump? Time will tell (it probably won’t, let’s be honest).

Sadly for those outraged, it’s impossible to boycott Valance because, as far as we can tell, she doesn’t have anything to boycott. Footloose and cancel-free.

Perhaps the only way to make sense of it is to look back to Valance’s 2002 hit, Naughty Girl. “You saw things you shouldn’t have seen,” sang Valance. “Been a naughty girl, real bad so-and-so.”

04/11/2022 lifestyle Comments Off on From Ramsay St to Mar-a-Lago: Why is Holly Valance hanging out with Donald Trump?
Recent Posts