Coastal communities want "selfish" Melbourne, Sydney and Canberra residents flocking to beachside boltholes to ride out the coronavirus pandemic to stay away.

Local mayors have warned their health services will be overrun if holidaymakers, turning up in increasing numbers in the lead-up to the Easter break, don't heed Prime Minister Scott Morrison's call for people to halt all unnecessary domestic travel. 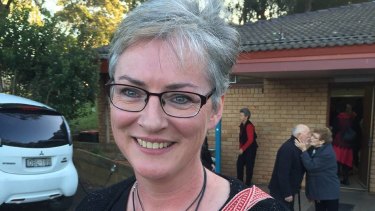 Shoalhaven mayor Amanda Findley: “Wake up people. It’s one holiday in one year of your life. Your act of selfishness could result in the death of a stranger.”

Shoalhaven mayor Amanda Findley said it was "freaking ridiculous" that people were relocating to her local government area, a popular holiday spot for Canberrans and Sydneysiders.

"We don't have the resources to handle it if our population explodes with the disease," Ms Findley said. "We are seeing it all over towns and villages, people turning up and having a good time. It's been very visible.

"I had a surfer ring up to say a beach car park was full of ACT number plates. And a takeaway and general store said they're providing curb-side supply to locals but there were a lot of people from out of town who told them they were just down for the weekend.

"Wake up people. It's one holiday in one year of your life. Your act of selfishness could result in the death of a stranger." 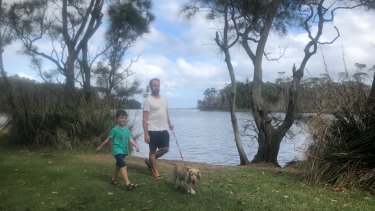 Berrara resident Matt Jansch, with son Joshua at Berrara Lagoon, said locals were scared of the “influx of people” in recent weeks.

Berrara resident Matt Jansch said locals were scared of the "influx of people" in recent weeks. "Go away" signs had appeared along the road into his beachside community of 300, about three hours south of Sydney.

"I'd guess about 90 per cent of the village are up in arms about the fact that others see this as a place to escape from the possible pandemic," Mr Jansch said. "The spread would accelerate quicker than urbanised populations. We have an older demographic here and limited services – like one supermarket – so we're all forced to go to the one location which could be a central point for transmission of the virus."

Surf Coast mayor Rose Hodge said she understood why people wanted to leave Melbourne and come to their usual holiday destination but warned the "very few health clinics" in her community could be swamped.

"We saw a lot of people come here last week on the first week of school holidays and we were very concerned about that," Ms Hodge said. "I know it's extremely tempting to come down, especially for people who have a second home and are ratepayers. But we need you to keep yourself safe in your home." 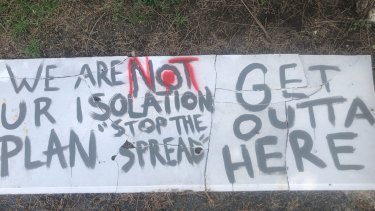 “Go away” signs have appeared along the road into Berrara, NSW.

Ryan Palmer, the mayor of Port Stephens in the NSW Hunter region, said the No.1 question he got from residents was: "What are we doing about holidaymakers coming to our area?"

Kiama mayor Mark Honey wants visitors to stop making the journey south from Sydney, saying many of the area's beaches and cafes were already shut.

"Our area is really not a place for visitors to come to [at the moment]. It's purely and simply about preserving the community from the pandemic and trying to halt the spread."

The mayor of Mornington, Victoria, Sam Hearn, said the more people in his government area "the more dangerous the situation will be" for everyone.

NSW Deputy Premier John Barilaro on Tuesday said residents in regional areas had to make the "tough call" to tell friends and family from the city they wouldn't see them until Christmas to limit the spread of the virus.

Get our Coronavirus Update newsletter for the day’s crucial developments at a glance, the numbers you need to know and what our readers are saying. Sign up to The Sydney Morning Herald’s newsletter here and The Age’s here.

03/31/2020 lifestyle Comments Off on ‘Freaking ridiculous’: Coastal communities tell city holidaymakers to stay home
Recent Posts
We and our partners use cookies on this site to improve our service, perform analytics, personalize advertising, measure advertising performance, and remember website preferences.Ok