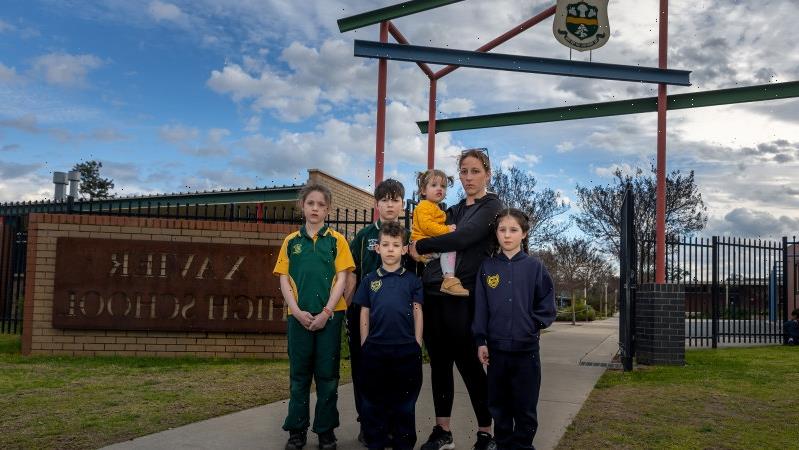 Today when Tegan Greenfield works in Albury, customers see a Victorian number plate and say ‘they need to go home’. She lives just three kilometres away.

Albury-Wodonga sits on the border of Victoria and New South Wales but was never designed as a split entity.

The town’s maternity hospital is south of the Murray River in Wodonga; the cinema is in Albury.

As daily coronavirus cases rage on in the hundreds in Sydney, over the last month Victorian Premier Daniel Andrews has gradually tightened “border bubble” arrangements that previously allowed free movement within communities such as Albury-Wodonga despite border closures.

In the move that hit locals hardest, from August 4 travel over the border became permitted only for six reasons: necessary goods and services such as medical care; care and compassionate reasons; paid or voluntary work; education; COVID-19 vaccination; and sport at a club or facility.

Local state MP Bill Tilley says it’s difficult for those outside border towns to understand how “intrinsically connected we are”.

“Albury-Wodonga is one community, one town. We don’t think of them differently. And now we’re at the point where if your usual hairdresser works in Albury but you live in Wodonga, you can’t visit them.”

No respite is on the horizon: Andrews has indicated his reluctance to ease the rules before NSW quashes its Sydney outbreak or the country reaches its first vaccination target of 70 per cent of adults. Both are unlikely to happen for months.

Every local has a story of the impact on them. Here are four.

That was enough for Tegan Greenfield’s daughter, 11, to be banned from attending her Albury school campus while her brother, 12, was allowed to stay on. 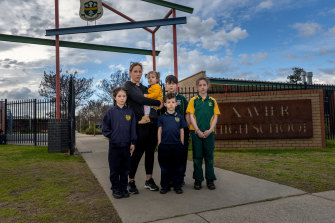 Tara Greenfield and her family in front of Xavier High School in Albury.Credit:Jason Robins

Both attend the same specialist school but one classroom is on the neighbouring school’s campus.

When that school asked Victorian-based students to stay at home and learn remotely in last month’s lockdown, Greenfield made the morning school trip from Wodonga with two kids but only dropped off one.

“You go to the school and the classrooms are separated by a little wire fence – my kids would be metres apart but different rules applied,” she says.

The 33-year-old laughs about it now. “Thankfully it was only for two days before they realised how ridiculous it was.”

While school is resolved, taking her two-year-old daughter to childcare remains a daily proposition. The centre is next to “the Causeway”: the main police checkpoint on the bridge connecting Albury and Wodonga.

“It’s right under the sign that says ‘Welcome to Victoria’. In the afternoons I pick the kids up from Albury and drive home. If the line at the checkpoint is long, which it often is at school pick-up time, we just say ‘oh well, we’re not going to childcare today’.”

Two months ago, frustrated by the wait as she crossed back into NSW every evening to work at an Albury service station, she requested a transfer to a Wodonga outlet.

“The closures have changed the atmosphere in the town. When I worked in Albury, customers would come, see a Victorian number plate and say ‘they need to go home’. I’d respond ‘Sir, that’s my car and I live three kilometres away!’.”

Greenfield has lived in Albury-Wodonga for 13 years.

“My kids didn’t realise we lived across two separate states until they were asking me what all these police were doing here last year.”

“Lockdown after lockdown the impact on people is like a fish that’s been dragged out of water and is gasping for air,” says Zoran Paunovich.

“I’m trying to do everything I can to breathe oxygen into their souls, to lift morale and to strengthen their faith.” 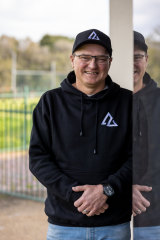 Paunovich is the senior minister at New Life Chapel in Wodonga, a church with hundreds of parishioners on both sides of the river.

When the border bubble tightened so that residents could only cross for essential activities – churchgoing not being one of them – he didn’t want to leave those north of the border behind. So he rented an event space in Albury.

He now delivers his Sunday sermon three times: twice in Victoria, once in NSW.

“It started as a one-off thing where we paid $1000 each Sunday for the Albury space. I’ve now had to tell them that I don’t know how long I’ll be doing this, so we’ve negotiated it down to $650 for each morning,” he says.

“It’s an unexpected, unnecessary cost that could be going to the community, to Foodbank, to help those in need.”

The double-up presents the challenge of sourcing enough volunteers and musicians from each side of the border, some of whom have working permits and can travel between states while others cannot.

“I’m prepared to pay that cost to get 50 people together on a Sunday,” Paunovich concludes.

“It’s great we can stream services online, and we occasionally do. But it’s not the same. Sometimes people need Jesus with some flesh on, something that’s touchable, relatable and real.”

The laser cutting machine was an Italian model, stocked by only one operator across Australasia. Thankfully it was available in the Melbourne suburb of Yarraville, a four-hour drive from Sherryan Torpy’s steel-cutting business in Albury.

The supplier was, along with one business in WA, also the only place able to complete repairs.

No problem, Torpy thought, it’s only a dash up the Hume Highway for the technician if something goes wrong.

Two weeks ago something did go wrong: the head of the laser cutter broke down. Torpy, who started Steeltech Engineering in 2003 with her husband, was suddenly left wishing the drive from Melbourne was just a few minutes shorter.

“We’re 2½ kilometres north of the Murray River. If the technician came to our workshop he wouldn’t be allowed back home,” she says.

“We’ve tried to negotiate an exemption but the technician isn’t deemed an essential worker. He is as far as we’re concerned! We’ve also offered to shut down the entire workshop so that nobody is around to infect. He could drive in, fix the machine then leave without any contact. Still the answer is no.”

The laser machine, and Steeltech’s business cutting parts, hit a complete standstill until Torpy got it working at limited capacity last week. The company’s 15 employees have been asked to use up their annual leave and rostered days off in the meantime.

“We’re babying the machine, watching it like a hawk. A lot of clients have had to go elsewhere because they needed their parts. We’ve let people down and I don’t know if we’ll get them all back.”

Torpy says the business will be walking on eggshells until border rules loosen. “Ultimately the man in Yarraville is the only one within yahoo who has the part.”

To host half a crowd, or no crowd? That was the question faced by Annette Challis and her 12-member cast at the start of the month.

The crew embarked on rehearsals for their theatre production of Broadway hit Harvey months ago, when Delta was just the name of a pop singer. 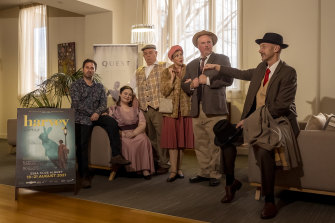 Victoria’s fifth lockdown ended on July 27 and ticket sales quickly picked up among locals on both sides of the border.

A good thing, right? In this case, wrong. Once movement within the bubble was restricted to five essential reasons on August 2, those south of the Murray River wanting to attend the show in Albury no longer could.

The cast weren’t immune: the Victorian members suddenly didn’t know if they were allowed to travel into Albury for rehearsals. They were ultimately determined to be permitted volunteers because the proceeds of the production were going to charity. But did that also apply to the Victorian director? (It did, they discovered.)

“Nearly 50 per cent of the sales were to Victorians. We sat down as a crew and we all agreed that we had friends and family in both NSW and Victoria who we wanted to see the show,” Challis says.

“We’re going to continue rehearsing, we like spending time together but it’s a shame we’ve been put under these constraints. We feel like the ball that’s been tossed around by each state.”

They could be tossed around for some time more, but Challis is keen to bounce back. “We’re hoping to make it happen by the end of the year. Think of it as something to look forward to.”

08/13/2021 lifestyle Comments Off on Fish out of water: Life inside the ever-changing border bubble
Recent Posts