Escape to the Chateau’s Dick and Angel transformed a 36-year-old vintage wedding bus into a family campervan on last night’s programme, but viewers slammed the conversion and deemed it ‘a rare fail’ for the couple.

Now in its sixth series, the programme follows the ambitious pair as they renovate the 45-bedroom Château-de-la-Motte Husson in France, which they bought in 2014 for £280,000.

Last night’s episode of the Channel 4 show saw Dick, 59, and Angel, 48, who are parents to Arthur, six, and Dorothy, five, transform an Asquith Mascot bus into a campervan for family adventures.

But many viewers were unimpressed with the van conversion and some were left questioning Angel’s choice of garish daisy wallpaper for the interior. 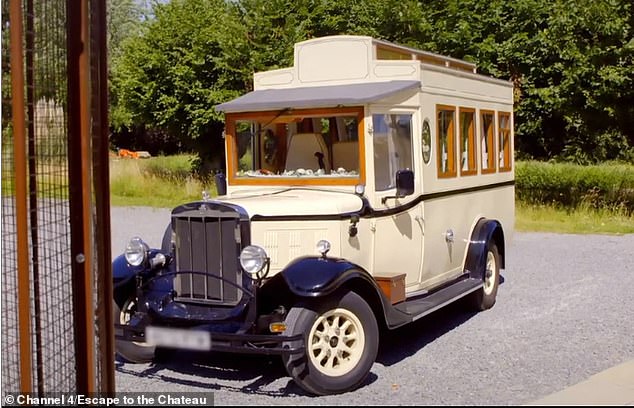 Viewers of last night’s Escape to the Chateau were left unimpressed after Dick, 59, and Angel, 48, transformed a 36-year-old wedding bus into a family campervan 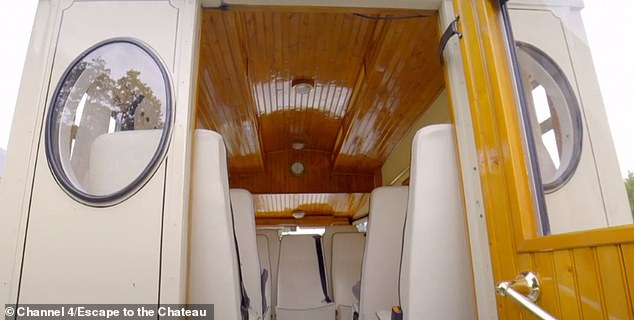 Before the conversion, the bus was used as a wedding vehicle, with the interior of the van panelled with wood 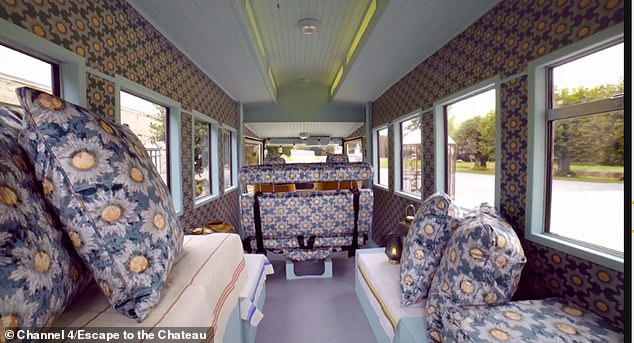 But the couple transformed the interior of the vintage bus, with Angel designing a daisy print pattern for the walls and bespoke crushed velvet material for the seats and cushions

One commented: ‘Can’t stop laughing at the ‘campervan’ on #EscapeToTheChateau. A rare fail for this pair. Should have kept it as a vehicle for brides who want to arrive fashionably late for their weddings, and got a bigger campervan.’

Another wrote: ‘Much as I love #EscapeToTheChateau if I’d sold that beautifully renovated bus it would break my heart to see what they have done to it.’

In last week’s episode, Dick travelled to Wales to buy the Asquith Mascot bus for the family.

The vehicle was being used as a wedding car, and featured heavy wood panelling and nautical-style windows. 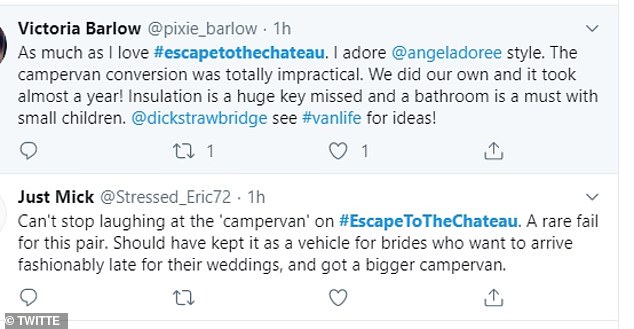 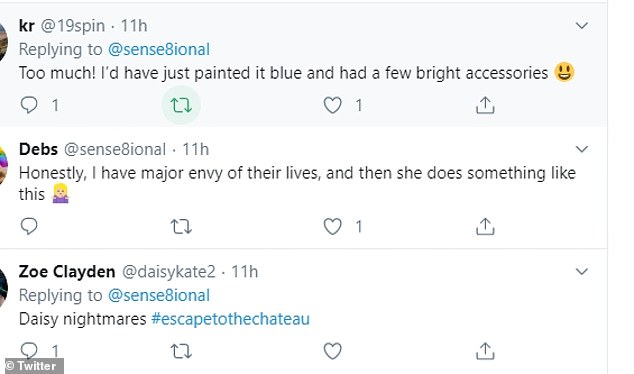 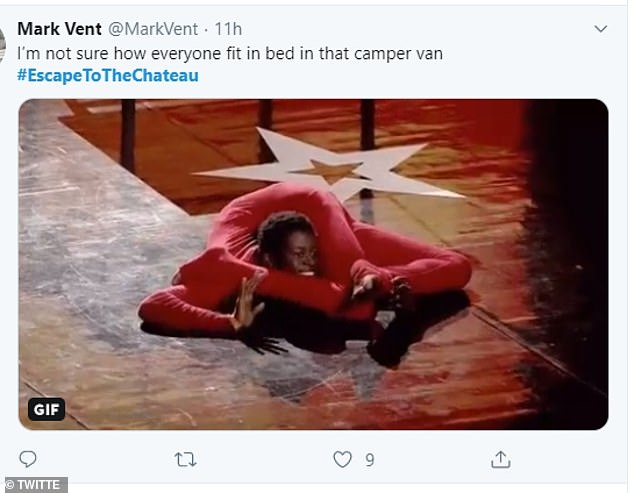 Viewers slammed the van conversion, with some questioning the space of the vehicle and others slamming Angel’s design

But Dick said he had grand plans to change the bus into a family campervan, revealing: ‘The shell is what we’re after.’

After a 400 mile journey through three countries, Dick bought the van home to a delighted Angel, who exclaimed: ‘It is so much better in real life.’

And in last night’s episode, the couple were determined to renovate the bus into a fully-functional campervan, complete with a bed, sink, toilet and cooking facilities.

Angel explained: ‘Dick has been talking about having a campervan since we met really.’ 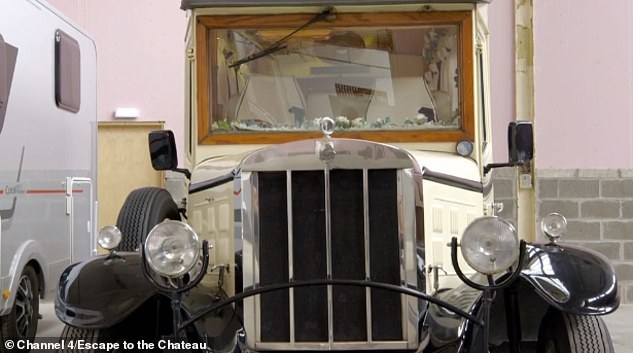 In last week’s episode, Dick travelled to Wales to buy the Asquith Mascot bus, which he hoped to transform into a family campervan

The couple’s enthusiasm about the project was infectious, with the children excitedly buzzing about the van and the family soon heading out for a picnic in the vehicle.

The conversion of the 36-year-old bus into a family campervan began with the removal of the backseats, which could be unscrewed from the bottom of the van.

However, Angel was left underwhelmed when the seats were removed, saying to her husband: ‘Babe, it’s tiny.’

With only 5 square metres to work with, the couple needed to create a flexible space which they could use practically with their two young children. 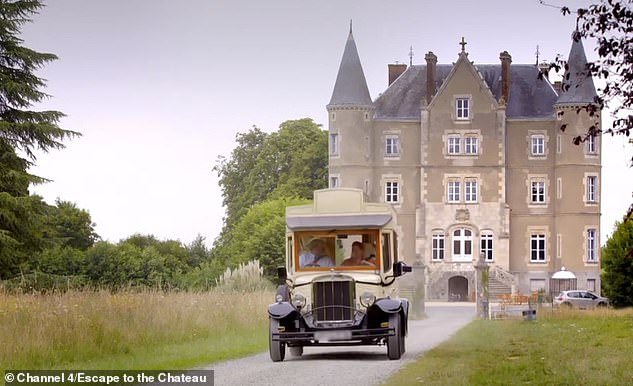 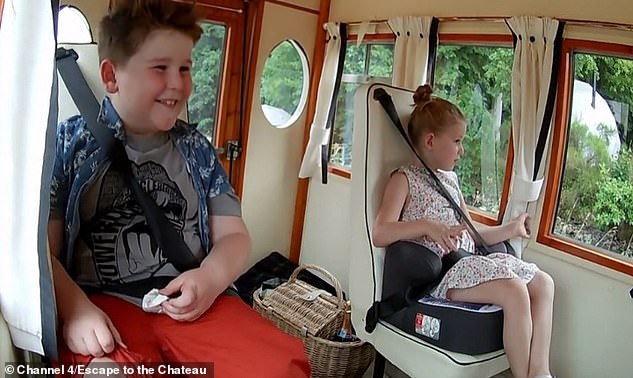 Dick and Angel’s children Arthur, six, and Dorothy, five, appeared delighted with the van before the conversion

But growing concerned about the size of the van, Angel and Dick decided they would have to have an orning extension to the vehicle.

While Dick began to think about the practicality of fitting the bus with cooking facilities, Angel started designing the interior of the van with a bespoke ‘daisy’ logo design.

She said: ‘The kids are not going to know about driving Miss Daisy, but we’re going to call her Mademoiselle Daisy.

‘I’m going to definitely do some lovely wallpaper.’ 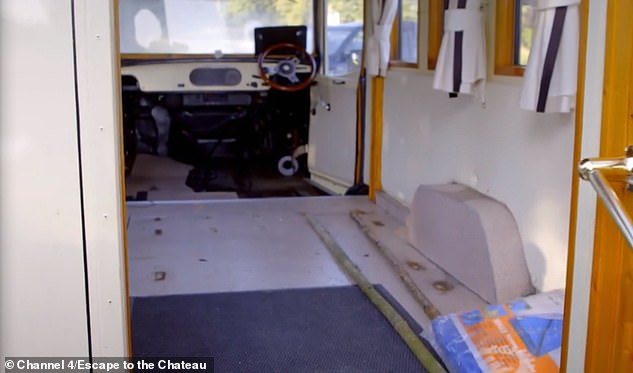 Dick ripped out the seats from the back of the bus, but left Angel underwhelmed with the size of the space they’d be working with

But she also suggested that Dick may have different priorities on the project, saying: ‘I’m thinking all of this lovely design stuff and he’s thinking, “How am I going to get a toilet attached to the van?”.’

Having sanded down the van and painted the interior a base colour of white, Angel began painting the panelling in a bright mint-blue.

She revealed: ‘I love the mint colour because it’s bright, and it has the 1920s feel. You need it bright for it being such a small space.’

Determined to make the space cosy and homely, Angel created a bespoke wallpaper from one of her original daisy designs, which she said she would use on the walls as well as for seat coverings. 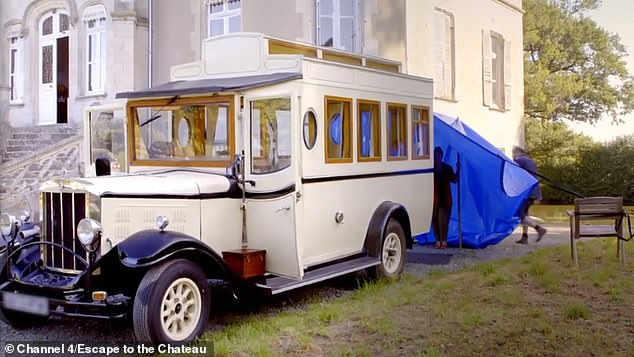 Having realised how small the inside of the van was, the couple decided they’d have to have an orning extension at the back of the vehicle

And while she focused on the interior, Dick continued trying to figure out how to fit a kitchen into his adventure bus.

Even though the couple planned on making a lot of the campervan’s new furniture themselves, other pieces had to be bought, including some old vintage car seats.

But the children were underwhelmed by the seats, with Arthur saying: ‘I thought the campervan was going to be pretty.’

Dick explained: ‘We searched for a very, very long time for integrated seats for this thing. It’s also going to be the basis for a bed.’ 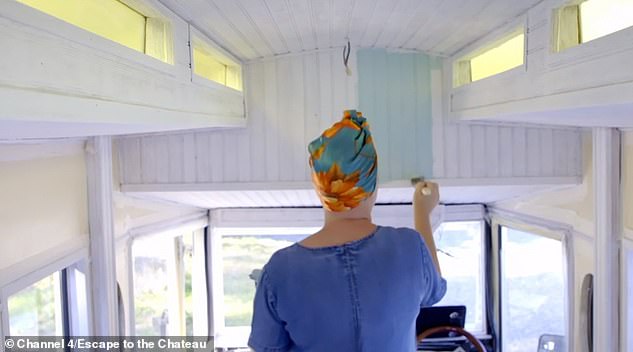 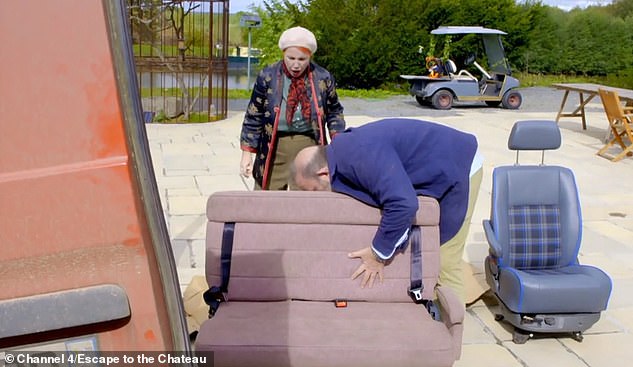 While the couple created some bespoke furniture for the van, other pieces were ordered online including vintage car seats

But when Angel said she would be decorating the seats with a crushed velvet material, Dick said he was unimpressed with the design.

Angel argued: ‘You’ve got the practicality, I’ve got the crushed velvet.’

At the end of the programme the couple revealed the van transformation, complete with a fold out kitchen and swiveling seats which could be converted into a double bed.

Angel said she was delighted, saying: ‘I have to admit that I wasn’t convinced the two fabrics would go together but it kind of does. 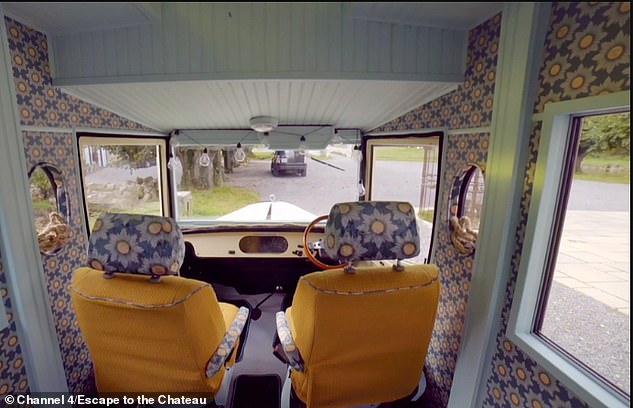 Angel admitted she was delighted with the bold finish to the van, and called the interior ‘amazing’ after the conversion

‘When you’ve got a small space like this, you kind of want it to feel spacious yet cosy. I love the crushed velvet. ‘

To Angel, it was a suitably stylish way to go out on an adventure, saying: ‘I just think it’s amazing.’

For their maiden voyage, they drove through the local village before arriving at an idyllic camping spot at the bottom of their garden. 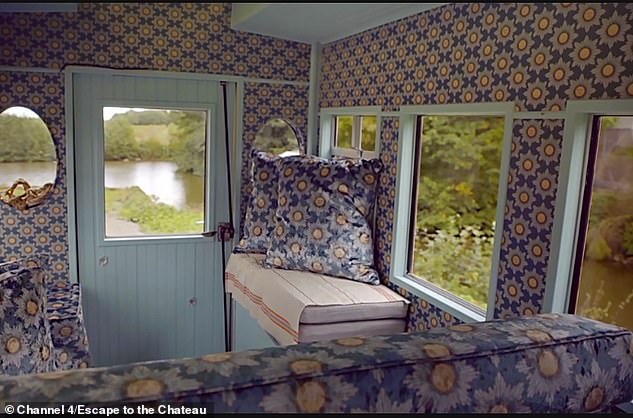 The interior was clad in a bespoke wallpaper, while Angel also created a crushed velvet fabric with the same print for the furnishings

But viewers were unimpressed by the camper van conversion, with some slamming the practicality of the design.

One commented: ‘No chance the lovely family Strawbridge all slept in mademoiselle Daisy overnight…way too cosy.’

Another added: ‘As much as I love #EscapeToTheChateau, I adore Angel’s style, the campervan conversion was totally impractical.

‘We did our own and it took almost a year! Insulation is a huge key missed and a bathroom is a must with small children. Dick Strawbridge, see #vanlife for ideas!’

12/02/2019 lifestyle Comments Off on Escape to the Chateau's Dick and Angel transform bus into campervan
Recent Posts
We and our partners use cookies on this site to improve our service, perform analytics, personalize advertising, measure advertising performance, and remember website preferences.Ok