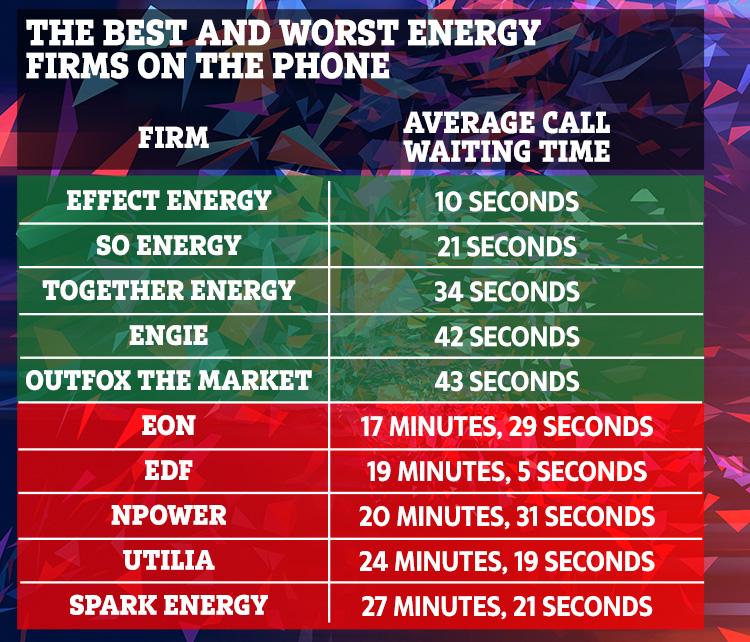 The team called each company 12 times at set times of the day, on different days of the week, and timed how long it took to get through to a human.

Utilita had the single longest wait time of one hour, 12 minutes and 40 seconds,  in the mystery shop carried out by Which?.

But Spark Energy, which went bust last week, was the worst firm on average for call waiting times leaving customers stuck on hold for 27 minutes and 21 seconds.

Waiting that long on the phone could potentially cost someone using a mobile £15 as it is an 0345 number.

Utilita left its customers waiting for an average of 24 minutes and 19 seconds. 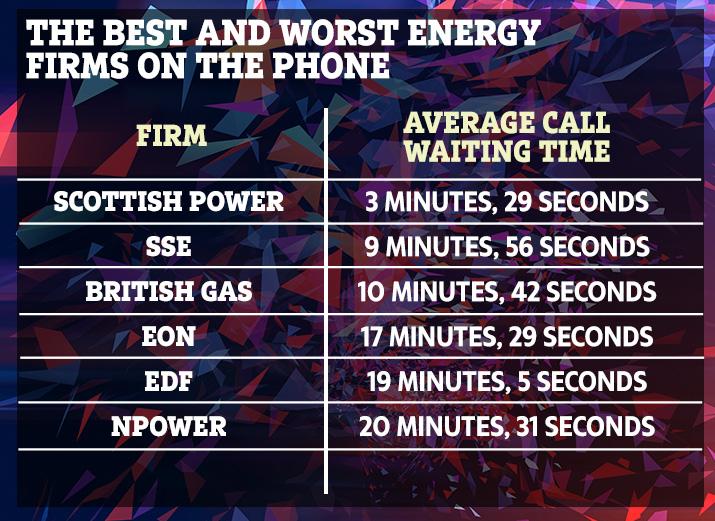 Five of the 'Big Six' energy firms kept customers waiting for 10 minutes or longer on average.

Npower was the worst of the major players with an average call time of 20 minutes and 31 seconds.

Scottish Power was the best of the 'Big Six' with an average call waiting time of three minutes and 29 seconds.

But some smaller suppliers were even faster.

Affect Energy had an average call waiting time of just 10 seconds, while So Energy  answered in 21 seconds.

SPONSORED: How to switch suppliers and save £100s

1. Switch and save up to £300 – Use a comparison site like MoneySuperMarket.com or EnergyHelpline.com to find the best deals.

2. Get cashback – Before you move onto a new deal check whether you can get cashback via a website like TopCashback or Quidco.

3. Sign up to Switchcraft, get £5 cashback and never worry about switching again – New free-to-use automatic energy switching service Switchcraft moves you on to the cheapest energy deal. It then searches for better ones once you're signed up and moves you onto them automatically. £5 cashback is paid into your bank account within 4 months of completing the switch. Pre-paid meter customers will receive a £5 Amazon voucher. Promotion ends 31/12/18. Open to those aged 18 and over. UK residents only. Click here for full T&Cs. News UK has a brand partnership with Switchcraft.

Sign up to Switchcraft for free and get £5 cashback – here

Which? also investigated how long it would take to get a response on live chatbots.

Npower was by far the worst supplier for live chat response times – taking more than 17 minutes on average before customers would get a response.

It was followed by SSE and Eon, which both took more than four minutes on average.

But Eon customers would be lucky to get a response at all, as the Which? researchers found live chat was unavailable on 10 out of 12 attempts.

Spark Energy customers faced an average waiting time of just 25 seconds on live chat – but the service was unavailable 50 per cent of the time.

Utilita answered live chat enquiries in 93 seconds on average but was unavailable on seven out of 12 occasions.

Which? contacted any firms that didn’t offer live chat by email or online form instead.

Both Engie and Economy Energy failed to answer any of the 12 enquiries in a two week period.

Alex Neill, Which? managing director of home products and services, said: “As if regular price hikes aren’t bad enough, customers of some energy companies are facing infuriating waits just to get through to a customer service adviser on the phone.

“'No one should have to put up with shoddy customer service and rip-off deals. If your current supplier is constantly leaving you in the lurch, you should switch and potentially save almost £400 a year.”

In the period since Which?'s investigation, Extra Energy and Spark Energy have both stopped trading.

The Sun has contacted the industry group Energy UK for a comment.

Millions of Brits are paying too much for their energy bills – but you can save hundreds of pounds a year by switching providers.

Savvy savers reveal how you can cut your energy bill by HUNDREDS of pounds this winter.

Six small energy firms have gone bust this year – are they safe to sign up to?