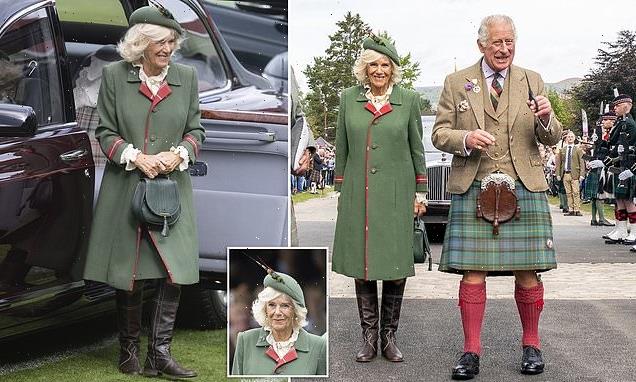 The Duchess of Cornwall has stepped out in a green and red Scottish outfit to attend the Braemar Gathering near Balmoral.

Camilla, 75, (who is known as the Duchess of Rothesay while in Scotland) accompanied her husband Prince Charles, 73, at the gathering, which is the most famous of the Highland Games, and is known worldwide.

Also with the royal couple were Princess Anne and Timothy Laurence. However, the Queen, 96, missed the event for the first time in her 70-year reign, amid ongoing issues with mobility.

In her stead, Charles, referred to as the Duke of Rothesay when in Scotland, was set to officially open The Queen Elizabeth Platinum Jubilee Archway during the festival and present awards to the top-performing competitors. 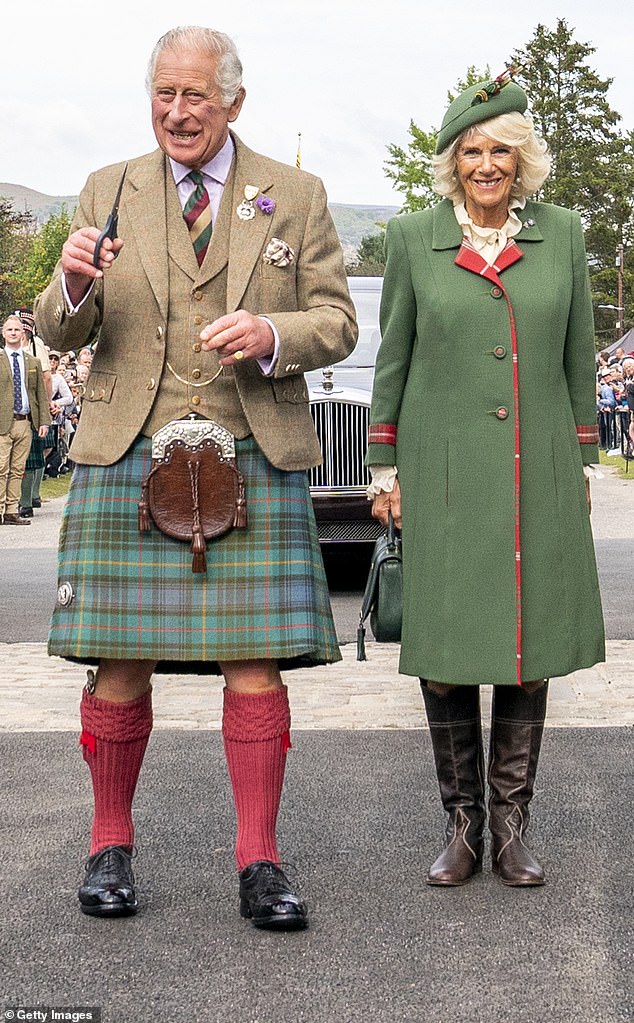 The royal opted to wear a green dress coat with a red tartan trim, alongside flat brown boots, and a green handbag 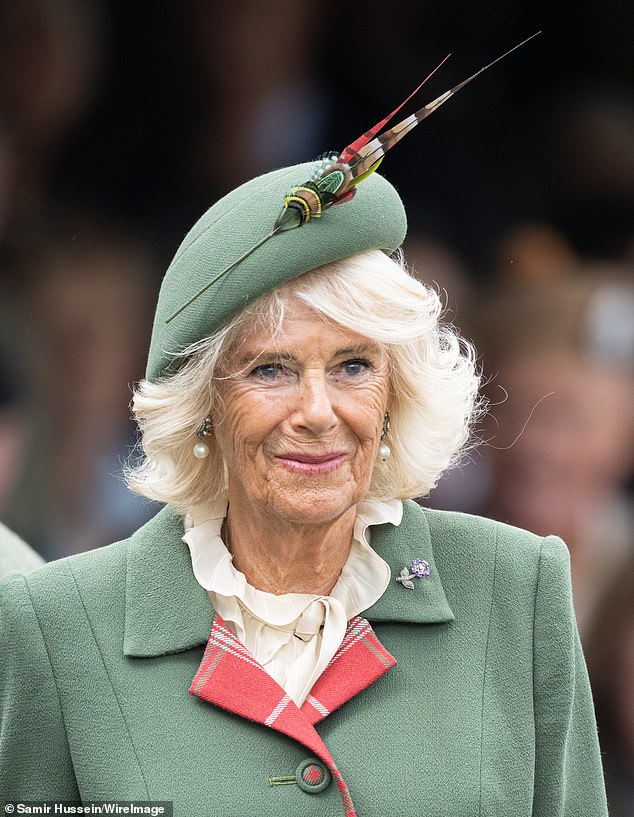 Camilla finished her look with a natural make-up look, pairing a fresh base with a natural pink lip. Under her green hat, her locks were styled into loose waves

In honour of the Scottish event, Camilla donned a green dress coat with a red tartan trim.

The royal appeared to make another nod to the country with her green handbag, which was similar in shape to a classic sporran, and tasseled.

Camilla finished her look with a green hat, which boasted a feather detail, and practical flat brown knee high boots.

Under her hat, the Duchess’ hair was loose and styled into waves, and she opted for a fresh make-up look, pairing a light base with a natural pink lip. 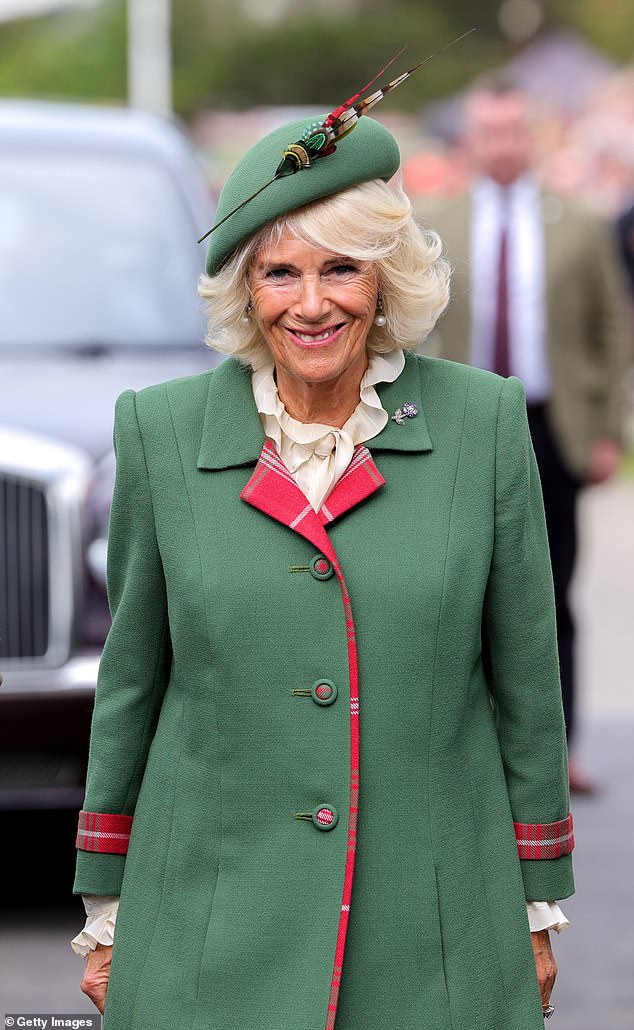 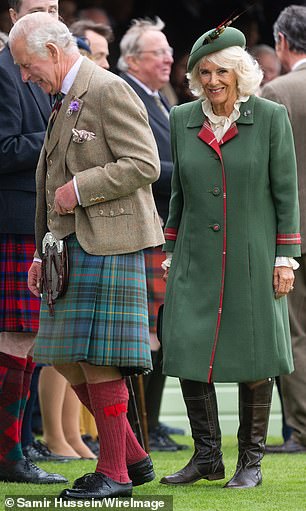 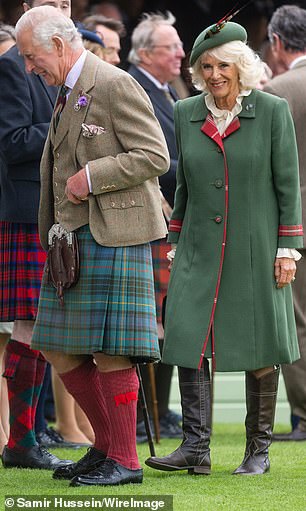 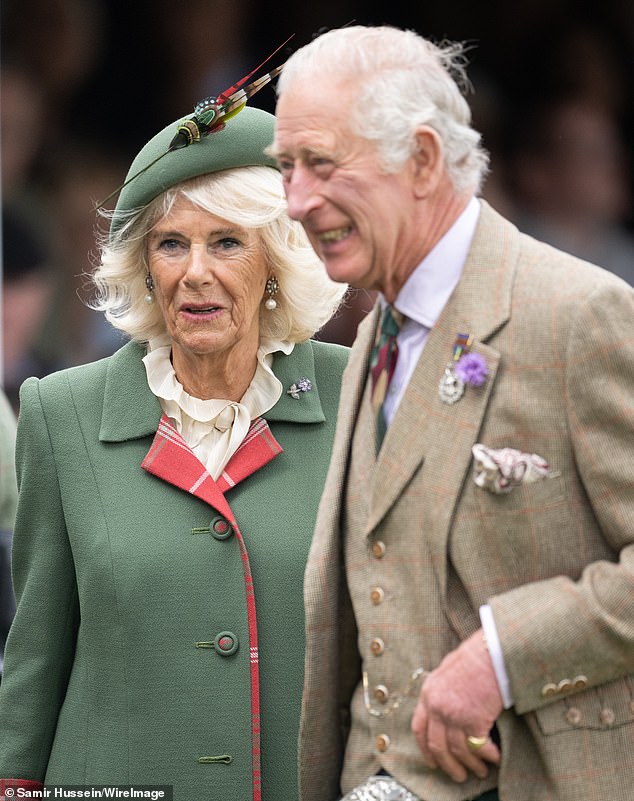 The royal couple were snapped beaming as they attended the event, which is a major fixture on the royal calendar, near Balmoral 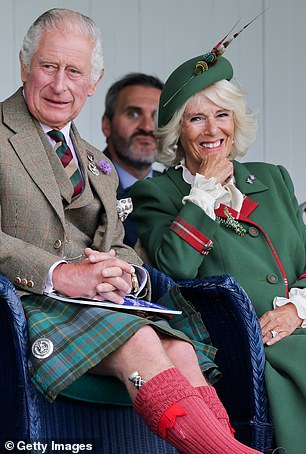 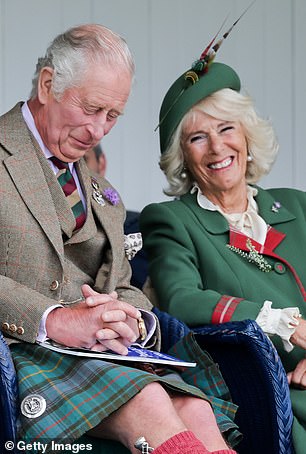 At one point while watching the festivities, the couple (pictured) appeared to share a joke, and looked as though they were laughing 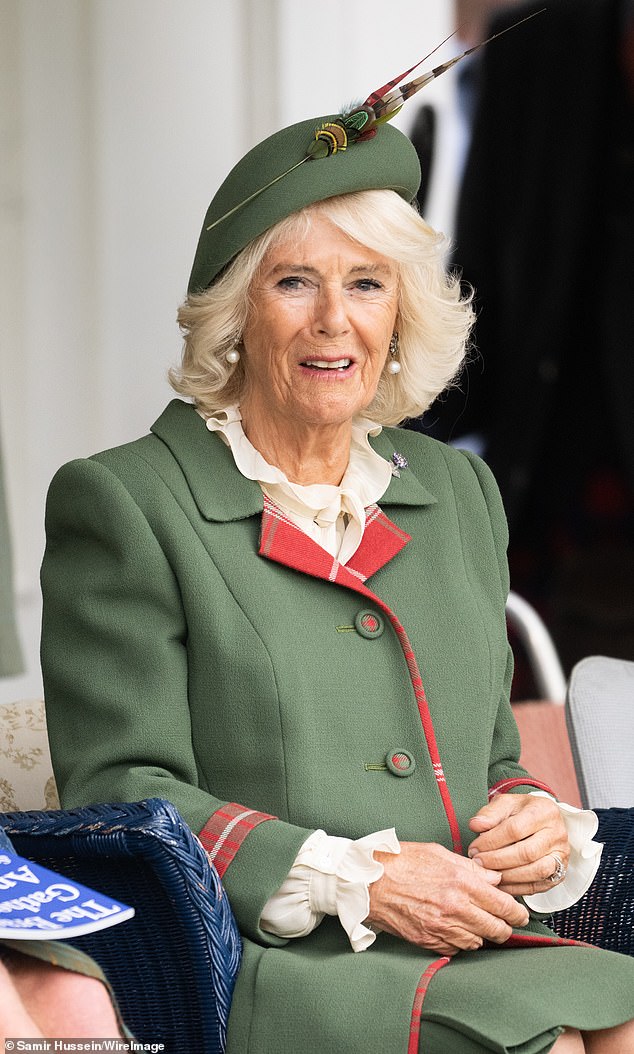 Camilla cut a stylish figure in her outfit, which incorporated elements of classic Scottish design in the tartan trim, and looked practical for the outdoor event, as well as elegant 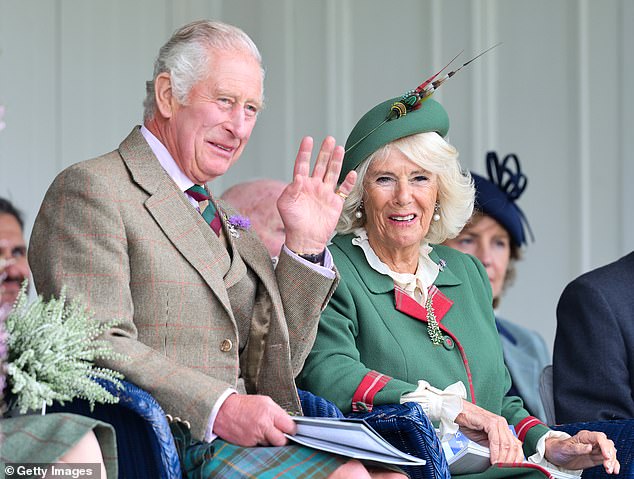 Prince Charles and Camilla are joined by Princess Anne and Timothy Laurence at the Highland Games to open the Queen Elizabeth Platinum Jubilee Archway after Her Majesty, 96, was forced to miss one her ‘favourite’ events ‘for her comfort’ 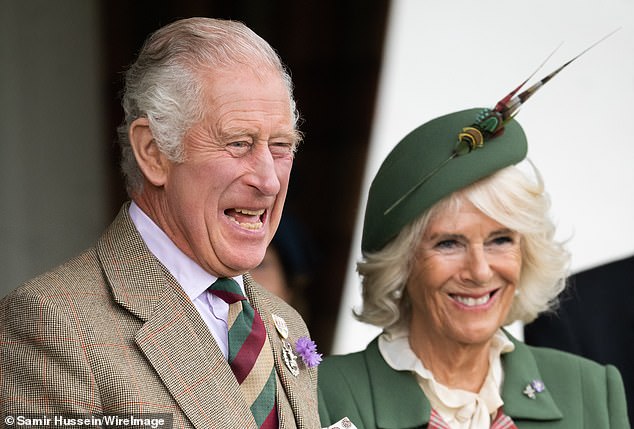 Fun and games: Prince Charles (left) seemed to be in high spirits at some points during the traditional event (pictured with Camilla, right) 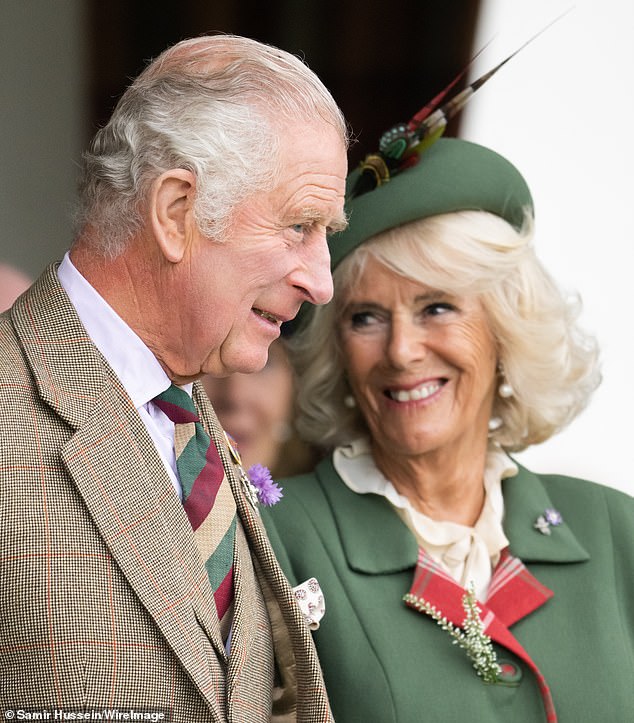 Although her Majesty was unable to join Prince Charles (left) and Camilla (right) as they attended today’s event, it was live streamed so she could watch from the comfort of Balmoral

The outfit was completed with a pale brown tweed blazer, a lavender shirt, and a striped tie.

While the Queen was unable to attend, for the first time in the event’s history, it was live streamed online so her Majesty could watch from the comfort of Balmoral. 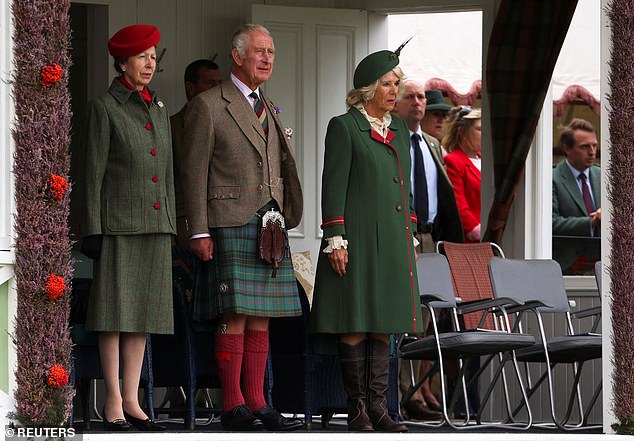 Prince Anne (pictured, left) also attended the games, which she watched alongside her brother Prince Charles (centre) and Camilla (right) 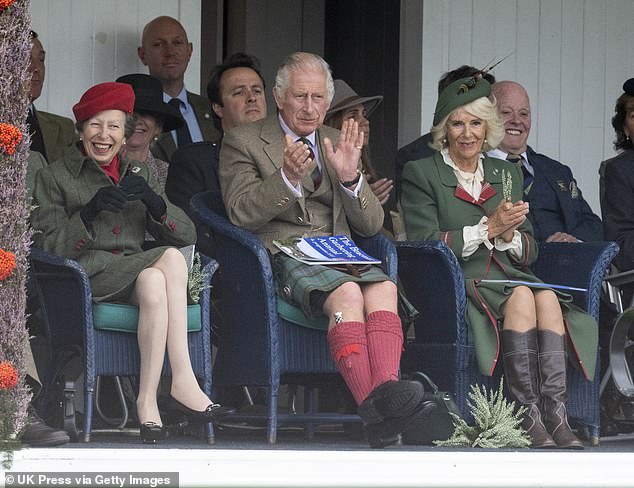 The royals took to their seats to watch the traditional demonstrations during the Braemar Highland Gathering today (pictured L-R: Princess Anne, Prince Charles, and the Duchess of Cornwall) 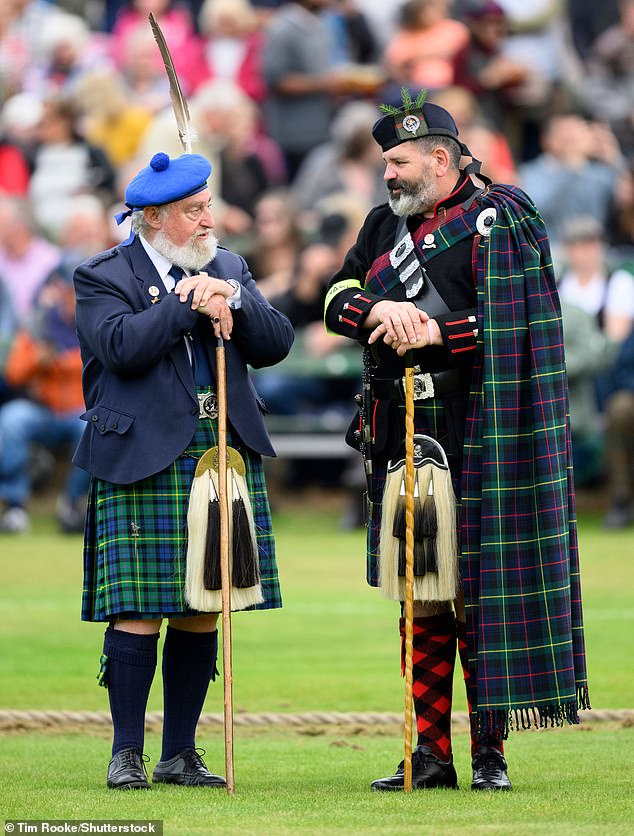 All colours of tartan can be seen at the Games, which features longstanding Scottish traditions, music and dance

This year’s competition – which has seen contestants battle it out in caber-tossing and tug-of-war in front of spectators including the Royal Family  – is the first to be held since the start of the pandemic and will be streamed online for the first time.

Organisers said: ‘We are passionate about our traditions, heritage and history and we are excited that we can reach new and old audiences to share those with you.’

The Braemar Gathering is arguably the most famous Highland Games event in the world and takes place on the first Saturday of September every year.

This year’s event is the first since 2019 after the pandemic forced organisers to cancel the last two years. 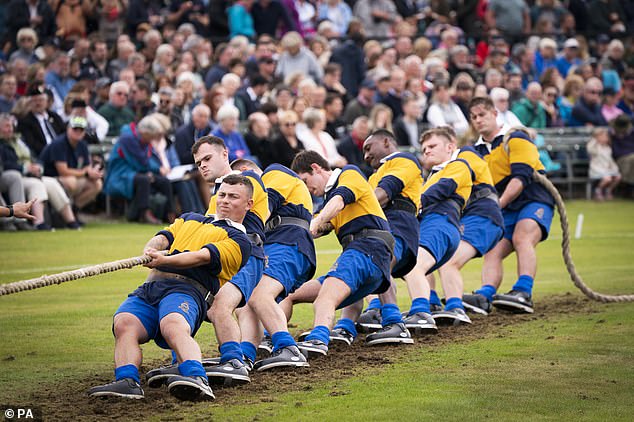 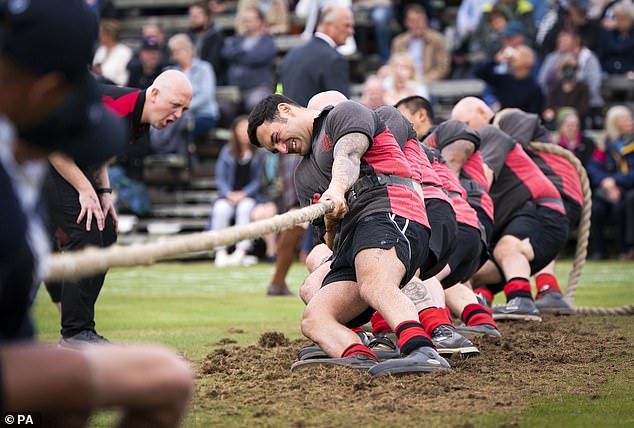 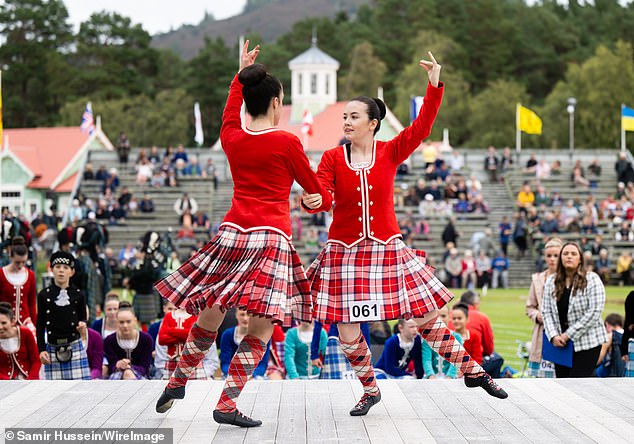 The Highland dancing competition takes place at the Braemar Highland Gathering on September 03, 2022 in Braemar

The festival is known to attract visitors from all over the world and this year has featured competitors from Scotland, England, Australia and America.

The Highland Games, which are often attended by the Queen and the prime minister of the day, are usually a highlight in the monarch’s calendar. They are held at the Princess Royal and Duke of Fife Memorial Park in Braemar.

But royal sources confirmed yesterday that there were two main issues in terms of the Queen’s attendance – firstly getting her to the games, but also that she would have to sit in public for a long period of time to watch them.

Reports suggested it may be the pavilion where her majesty would have traditionally sat may have been a factor in the decision to miss the event this year. 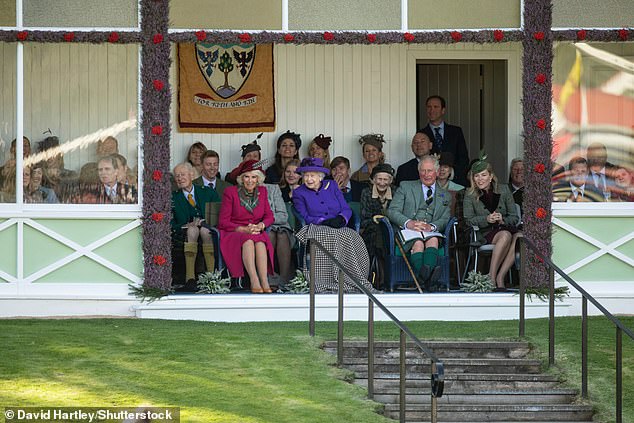 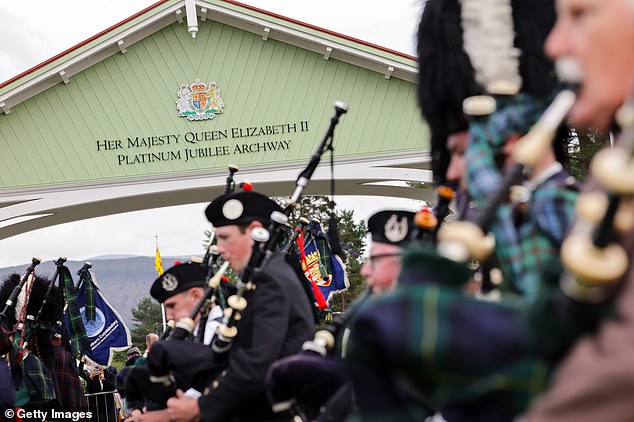 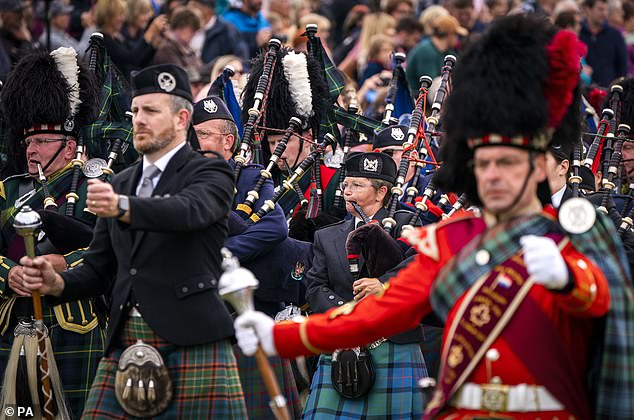 Pictured: The Massed Pipes and Drums parade in the arena during the Braemar Royal Highland Gathering in Braemar

In previous years, the Queen has enjoyed the world-famous even from the Royal Pavilion which has a series of at least ten steps leading up to it which would have to be navigated by anyone hoping to take their seat in the box.

Speaking to BBC Breakfast from Braemar this morning, Royal Correspondent Nicholas Witchell said he didn’t believe the Queen’s absence was something to be concerned about.

He said: ‘She is a lady of 96 and frankly what 96-year-old doesn’t have some health concerns?

‘I think the important thing is has there been any significant change in her health in recent weeks and my understanding is that there hasn’t.

‘We saw at the time of the Platinum jubilee weekend that she was unable to attend various events then because of this mobility issue that she has, because of her comfort as palace officials describe it and that’s the situation here at the moment.