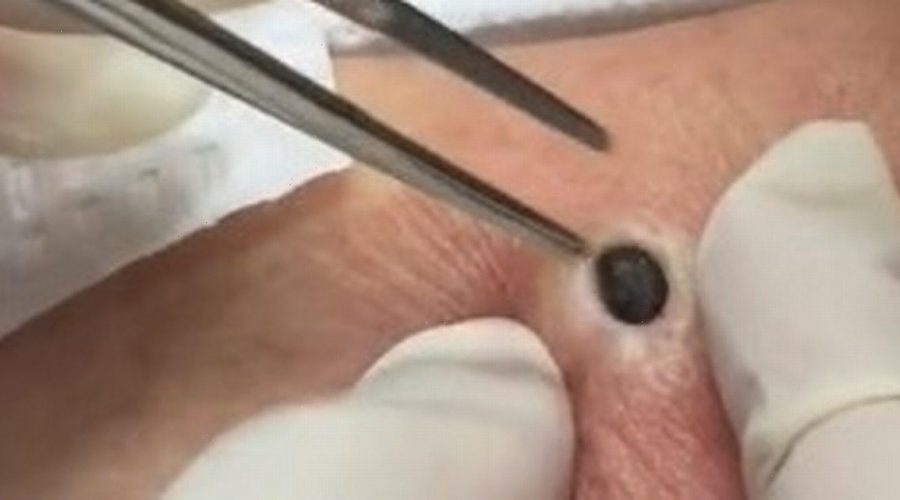 Dr Pimple Popper had viewers' eyes watering as she removed a gigantic blackhead from a pore that had "more space than IKEA".

In a video she shared on her TikTok channel, the medic shows the black bump, called a dilated pore of Winer, which is on her patient's shoulder.

The dermatologist, real name Sandra Lee MD, grabs the blackhead on either side with a pair of tweezers and tugs until it starts to pop out.

A gaping hole with a few drops of blood around the outside is left behind and viewers were left feeling uncomfortable with the "crater" in the skin.

The clip was watched more than 1.5 million times on the video-sharing app and hundreds of people left comments about the bruiser of a blackhead.

One viewer joked: "Um that was a bullet."

"More space than IKEA," quipped a second person about the big hole.

'That person got shot in the shoulder I have no explanation otherwise," commented a third baffled viewer.

Someone else confessed: "Man I'm so messed up if that was on me it would not stand a chance. Pain or not I'm plucking that thing."

Another recent dilated pore of Winer extraction that had fans talking was a totally different colour and people called it "Brussel sprouts".

Horrified viewers also compared the green oozings to "cabbage" and even "fresh guacamole".

This comes after Dr Pimple Popper had one of her strangest cases where she found a "whole ponytail" in a bump under a man's scalp.

In the weird video, the man seems to have hair growing inside-out and because it's stuck inside his scalp it has curled in on itself and formed a giant bump over the years.

When the dermatologist extracts the tight hairball she unravels it and it's so long that astonished viewers called it a "reverse mullet".

Are you addicted to pimple popping or does it gross you out? Have your say and let us know in the comments below