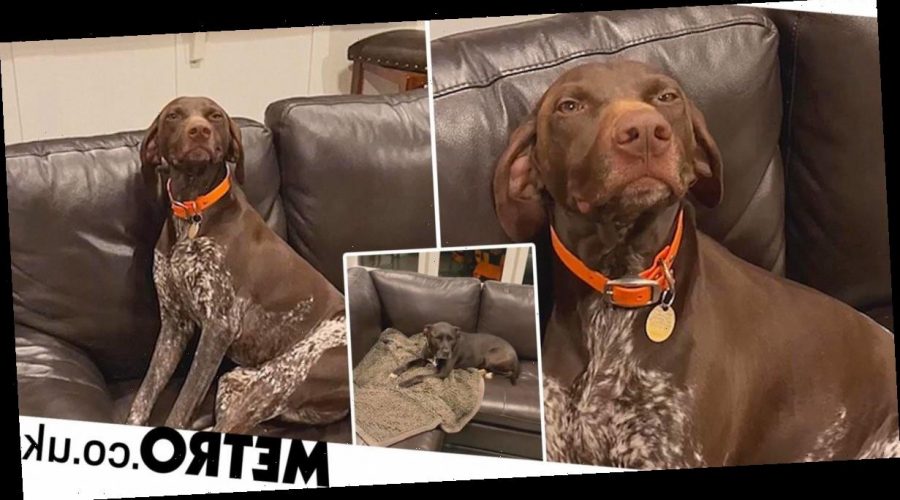 A clever dog who recently learned how to open doors wanted to try out the new trick.

Shiner, a German short haired pointer, not only got into the closed bathroom, but also turned on the bath tap.

Had Paige Bodden not returned in time, the rapidly-filling bathtub would’ve spilled and flooded the home.

Luckily Paige decided to come home early and fix her dryer vent. But she wasn’t pleased to see what her naughty pet had been up to in her absence.

She said the tub was ‘about 0.3 micro milliliters from overflowing’.

It was quite obvious to Paige that Shiner – the only to pick up the door handle trick – had been the culprit.

Paige’s other dogs – Kevin the papillon and a pit bull named Thor – bore witness to the telling off.

Video shows Paige asking Shiner: ‘Did you turn on the bathtub while we were gone?

‘Did you break into the bathroom and turn on the bathtub while we were gone. Almost flood the house. Did you do it?’

Shiner couldn’t deny the naughty act – he was the only one who had learned to turn door handles, and the tap had looked similar to the door knob.

Paige added: ‘Honestly I came home and was kind of confused by the sound of running water.

‘Initially I thought the Wet Bandits from home alone had struck. I followed the sound to the guest bathroom and found the tub about 0.3 micro milliliters from overflowing.

‘I normally get home much later but I had to meet someone to fix our dryer vent.

‘Shiner is almost four and just recently discovered how to open all of our doors… the shower handle looks the same.’

Do you have a story you want to share?