When Craig Robertson, 61, told his wife two years ago he had silicosis, an incurable lung disease, she was inconsolable for weeks.

His colleague at Sibelco, Kevin Weekes, said his own diagnosis after years working for the international minerals giant turned his world upside down. 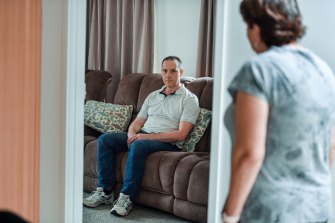 Kevin and Debra Weekes’ lives were turned upside down when he was diagnosed with silicosis after a company medical.Credit:Joe Armao

Mr Robertson put it a different way: “If it goes into this progressive stage, the only outcome is you’re going to die.”

It was not long before the pair had to leave Sibelco’s Lang Lang sand operation south-east of Melbourne, which the company has since sold, because it was too dusty.

Silicosis, linked to engineered stone commonly used for kitchen benchtops, is caused and can be exacerbated by tiny particles of crystalline silica entering the lungs. Unlike asbestosis, which can take decades to develop, it hits young and healthy workers.

Last year, more than 350 people were diagnosed with the disease and health authorities fear many more could develop it after exposure over the past decade.

But unions fear state and federal work health and safety authorities will not extend any new standards for working with engineered stone into areas where they say the risk is also elevated, such as quarrying and tunnelling.

National WHS standards intended to limit the amount of silica dust employees are exposed to already apply across Australia and some state and territory laws go further. But the Australian Council of Trade Unions wants stricter and more specific standards for issues including the amount of dust generated, ventilation and protective equipment.

A spokesman for Attorney-General Michaelia Cash said the government was considering recommendations from the dust diseases taskforce and working with states and territories on a response by the end of the year.

“The Commonwealth works with the states and territories, employer groups and unions, through Safe Work Australia, to drive measures to address the risks of occupational lung diseases in Australia, including the increase in silicosis cases in recent years,” the spokesman said.

Safe Work Australia, the national co-ordinating body for work health and safety, has revised its guidance, online educative materials and tightened standards for silica particles in the air.

Mr Robertson, who is due for a check-up soon, says he is fatigued. He said Sibelco did not offer appropriate alternative work, leaving him on WorkCover with no employment prospects.

A Sibelco spokeswoman said the company was committed to continuously improving health and safety at its operations but was unable to comment on individual workers.

“During its period of ownership of the Lang Lang site between 2001 to early 2020, Sibelco sought to align the product-handling procedures and workplace health monitoring program for its employees with evolving health and safety practices,” she said. “Sibelco is a leading member of industry efforts to understand and manage risks related to respirable crystalline silica.”

10/22/2021 lifestyle Comments Off on ‘Do you have your affairs in order?’: The words Kevin never wanted to hear
Recent Posts