Correct me if I’m wrong, but in my opinion, one of the absolute greatest parts of the holiday season is making, eating, and — most importantly — ogling over gingerbread houses. I’ve never been particularly talented at decorating them myself, but I get a total kick out of seeing what people can create and decorate on their own. But very few cookie structures beat Disney’s Grand Floridian gingerbread house. It is — by far — one of the most impressive gingerbread displays I’ve seen yet. It resembles an elegant Victorian house, and between you and me, I’m kind of considering moving in.

In case you didn’t know, Dec. 12 was one of the greatest holidays of the year: National Gingerbread House Day. And to celebrate, Disney unveiled a totally mind-blowing video, giving a behind-the-scenes look at their 14-foot gingerbread house. It stands in the lobby of Disney’s Grand Floridian Resort, according to a press release, and features various hidden Mickeys, an incredibly quaint pastry shop, and an absolutely adorable garden. It’s topped with delectable gingerbread shingles, and appears to be modeled after a Victorian-style mansion. Take a look at it, below — you won’t believe someone actually handcrafted it. 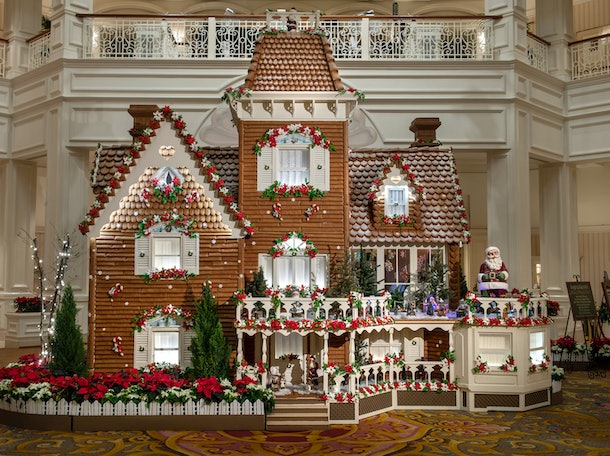 WOW, can you believe that thing? Let’s just say I wouldn’t be mad if I lived there after my current lease ends. Although I’m well-aware that inhabiting a house made of cookies might attract a few critters, it’s guaranteed to smell absolutely amazing all year long.

If you’re an avid Disney fan, you’re probably aware of the fact that this isn’t the first time the hotel has created a gigantic gingerbread house. In fact, every year, the Grand Floridian pastry team puts in over 400 hours of baking, as well as 160 hours constructing and decorating their famous gingerbread homes, according to the press release. They also use 10,000 pieces of gingerbread, in addition to 1,050 pounds of honey, 800 pounds of flour, 700 pounds of chocolate, and 600 pounds of sugar. Sounds like a pretty sweet project to me (LOL, get it?). 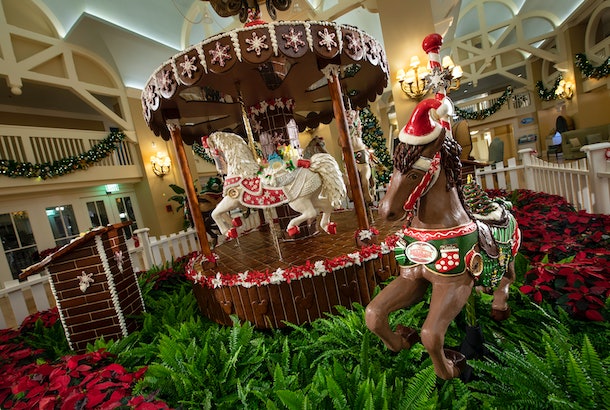 If you can’t make your way to Disney’s Grand Floridian Resort to check out their gigantic (and totally phenomenal) gingerbread house, fill the Christmasy Disney void with one of their "ugly" Christmas sweaters. That’s right — the company actually sells two classically "ugly" sweaters featuring Mickey ears, holly, and candy canes, formulated into a traditional Christmas sweater design, and all I can say is both have made it to the top of my list this holiday season.

There’s nothing more fragrant and delightful than having a gingerbread house in your living room, but imagine having one that’s 14 feet tall, Victorian-style, and totally awesome. The one in Disney’s Grand Floridian Resort is straight-up gorgeous, and believe me when I say I’m trying to sign a lease to live there next year.