Dinner lady who became an angel to the strays: The uplifting story of the woman who takes in neglected dogs and nurses them back to health out of the goodness of her heart

Do you know a woman who deserves recognition for her extraordinary strength, bravery or perseverance? Nominate her for our Inspirational Women of the Year Awards, in association with Swarovski. She could be from any walk of life — an exceptional carer, teacher or community champion. Finalists will attend an awards gala next March, in support of YoungMinds, a charity working to improve the mental health of young people. It is part of Heads Together, co-ordinated by The Royal Foundation.

Opening her emails, Val Phillips bursts into a big smile. On her screen are photos of two gorgeous border collies: snoozing contentedly on their beds; racing through a wintry field; leaping into a stream; and being smothered with hugs by their loving owner.

Her pleasure at seeing such happy and healthy animals is natural. But, for Val, there’s a deeper joy in these pictures.

Because she remembers what the two collies, Jenny and her sister Katie, looked like just two months ago, when they arrived on her doorstep in the most pitiful state. 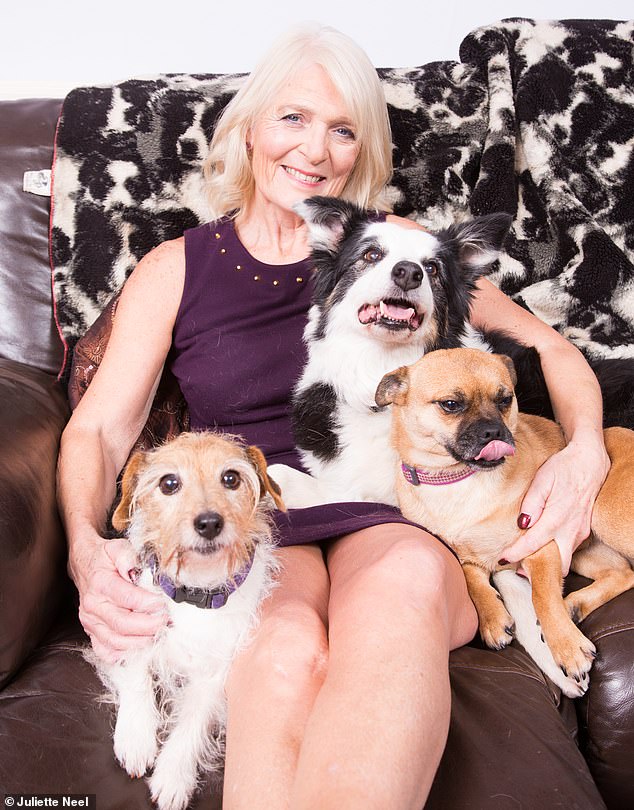 Val Phillips, 66, (pictured) has rehomed thousands of dogs since setting up her charity, Valgray’s Border Collie And Animal Rescue in 1978

They had been so maltreated, they were close to death. And it took the commitment and patience of this remarkable woman to nurse them back to health and make them fit for a new home — just in time for a cosy family Christmas.

‘My heart almost broke when I first saw them,’ says Val, 66. ‘They were strays who had ended up living feral. A dog warden saw them running along the motorway and managed to catch them.

‘Collies are such magnificent animals, but this pair were skin and bones. Their coats were so full of filth, their matted fur weighed more than the animals themselves.’

Over the next few weeks, Val nursed the dogs back to health, until she was able to wave them off to their loving new home with a family in Sunbury-on-Thames, Surrey.

It’s what she does every day of her life, serving as a last-resort carer for dogs who are seriously damaged, often near death, and can’t be looked after by regular rehoming charities. She also raises funds to rescue as many dogs as she can from Romania, where a large number are treated horrifically.

‘There’s never a quick fix,’ she says. ‘Dogs who have been badly mistreated don’t just need to be physically healed, they need to learn to trust again. That’s why wardens and charities, including Battersea Dogs Home, send me their dogs for rehabilitation.

‘It takes endless patience and time, which most families don’t have. I will sit for hours talking gently to a dog, coaxing him to trust me. I never look him in the eye — I just let him make the first move. I know I’ve cracked it when a dog voluntarily comes to sniff me. When they finally consent to a cuddle, it’s the best feeling in the world. But it can take weeks.’

For 40 years, Val, who lives with her partner, Keith Best, 66, a retired paramedic, has run an animal rescue centre from their home in Warlingham, Surrey.

Her charity, Valgray’s Border Collie And Animal Rescue, was established in 1978 and, since then, Val has rehomed thousands of dogs. Vet bills run to at least £1,000 a month and then there are all the animals to feed. 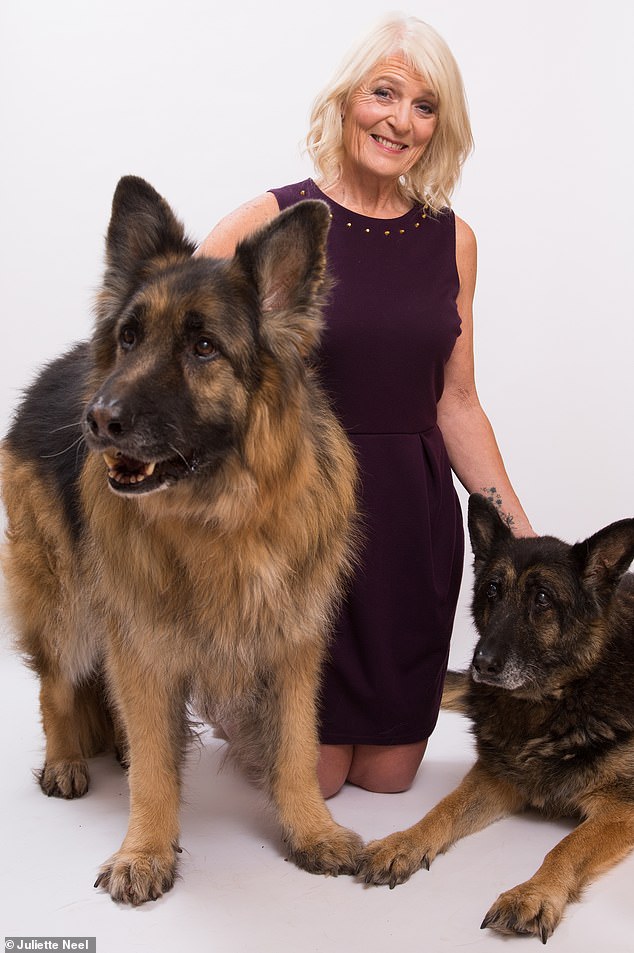 Val operates the charity without any pay, instead relying on her pension and donations to care for the animals

Val works without any pay, relying on her pension. Running costs are found through donations or the proceeds of a charity shop she runs with volunteers in her home village. ‘It’s become a bit of a community hub,’ she laughs.

Val and her team of five volunteers — including Keith and her daughter Victoria, 36, an office worker — take in abandoned and maltreated dogs from all over Britain and Romania.

While Val now has a core pack of some 15 dogs — all so psychologically damaged they cannot be rehomed — her priority is to rehabilitate the animals that come to her door. Her dream is to prepare them so that they are ready to live in family homes.

Abandoned and mistreated animals arrive day and night, brought in by the public and dog wardens or rescued (at a cost of about £300 a dog) from Romania. ‘The way dogs are treated in Romania is barbaric,’ she says. ‘They are kicked, beaten, set on fire and hit by cars — often on purpose. Romania has had a problem with stray dogs for generations. There’s no neutering programme, so the stray dog population has now grown into the millions.’

Val has rescued more than 150 dogs from Romania over the past eight years — dogs such as Icey, who lived with her for five years until he died in April, aged 18.

‘All the money to rescue him was raised by well-wishers,’ says Val. ‘Icey was so thin, he was close to dying of hypothermia.’ 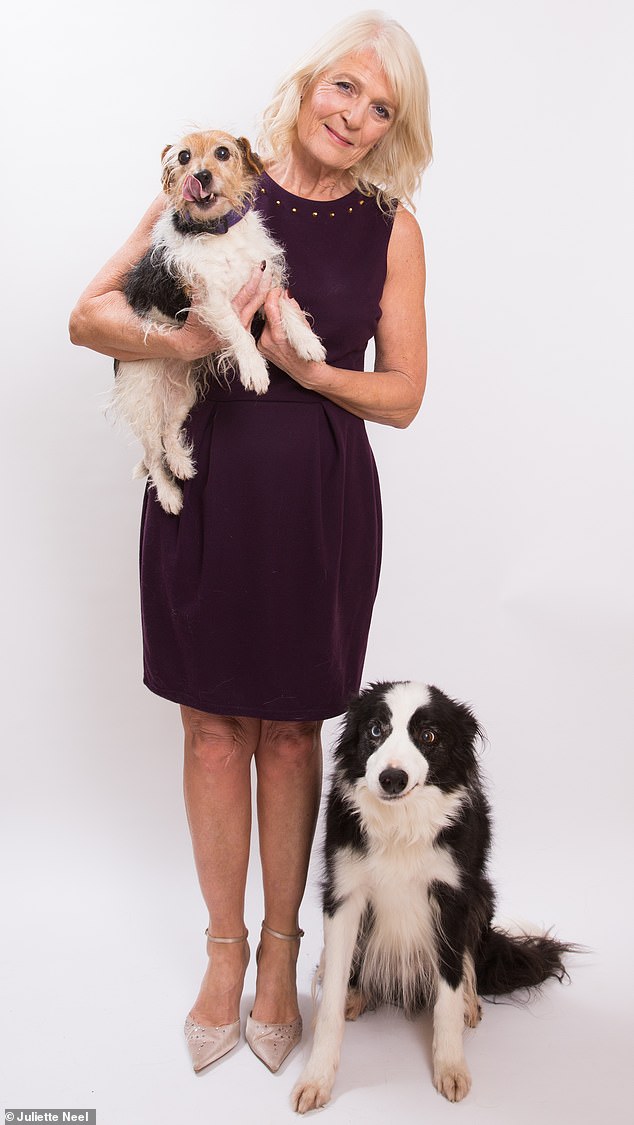 But, under Val’s tender care, Icey blossomed to such an extent that he became the star of the charity’s Facebook page, was photographed with dog-loving novelist Jilly Cooper and even won a prize at dog show Crufts.

‘Admittedly, it was for being the scruffiest dog,’ laughs Val.

Her passion for animals started in childhood. ‘My parents ran a pet shop which they called Valgrays, after me and my brother Graham,’ she says. ‘Although they didn’t sell pets, our home was full of animals. When I left school, I became a veterinary nurse.’

A t work, however, Val found her heartstrings being pulled by waifs and strays. ‘I ended up bringing loads of animals home,’ she says.

As her reputation spread, Val started her charity — later taking a job as a dinner lady to help fund the venture — and continued her work while nursing her late mother for five years after she suffered a stroke.

Though Val has found ‘forever’ homes for thousands of animals, she prides herself on being on hand in sad situations, too.

‘I was called by someone who had spotted a dead cat,’ she recalls. ‘From scanning the body for a microchip, I traced the owner. It was the local vicar. He was heartbroken.’

This is a woman who finds it impossible to say no to an animal in need — whatever the personal cost. Looking at Val’s devotion and dedication, who could not regard her as truly inspirational? 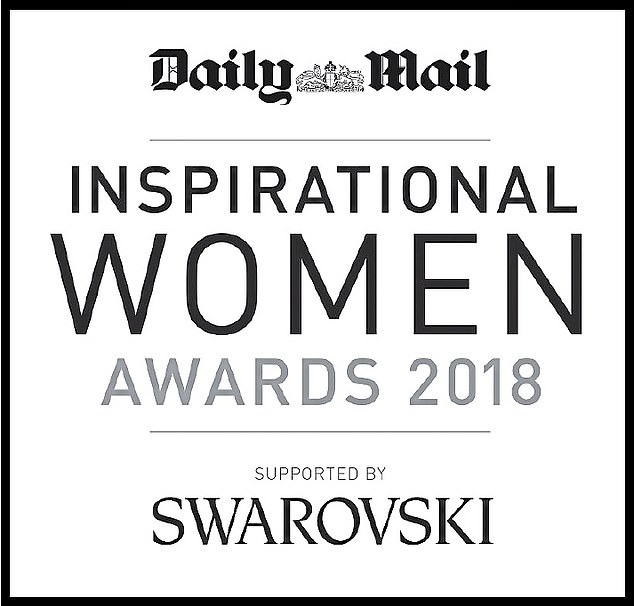 To nominate a woman who deserves recognition for our Inspirational Women of the Year Awards visit: email [email protected] or visit dailymail.co.uk/inspirationalwomen