When The Bachelor premieres on Monday, America will get to meet Colton’s 30 leading ladies right alongside him. It’s much too early to tell who will secure the final, or even first impression, rose, but it’s never too early to start getting to know the women vying for his heart. And let’s just say, if Colton is half the Game of Thrones fan that Bachelor contestant Demi is, they could fall in love on the spot.

Demi is a 23-year-old interior designer from Texas, and her ABC bio declares her a "proud country girl." Considering that Colton previously fell for country girl Tia Booth, he could definitely be into Demi’s ATV-ing, fishing, WWE-watching lifestyle, which her bio says are some of her favorite activities. Speaking of her bio, Demi’s also reveals her secret dream to be a Victoria’s Secret model with a posse called the Demi Angels. And her favorite color is yellow, which explains why she chose a yellow skirt/ crop top set for her limo exit.

But her bio also reveals what is maybe one of her most prized passions: Game of Thrones. Demi said that if she could eat a meal with anyone, it would be the character Jon Snow. And her Instagram just backs up this GoT love. For one, her Instagram bio contains the quote, "The North remembers," which is from the show. (It also contains the quote, "You can’t spell DIME without DEMI," which is not from Game of Thrones, but is equally revealing about Demi’s personality.)

It’s worth noting that Demi has one of the best Instagram usernames since Dean "Deanie Babies" Unglert from Rachel Lindsay’s season. Demi’s is Demi_Not_Lovato. Hilaaaaarious.

Speaking of Instagram, Demi posted a photo of her and Colton on night one of the show, and she gave it a pretty telling caption — if you like to read in to those kinds of things. Alongside the below picture, she wrote, "In 2018, this guy changed my life." 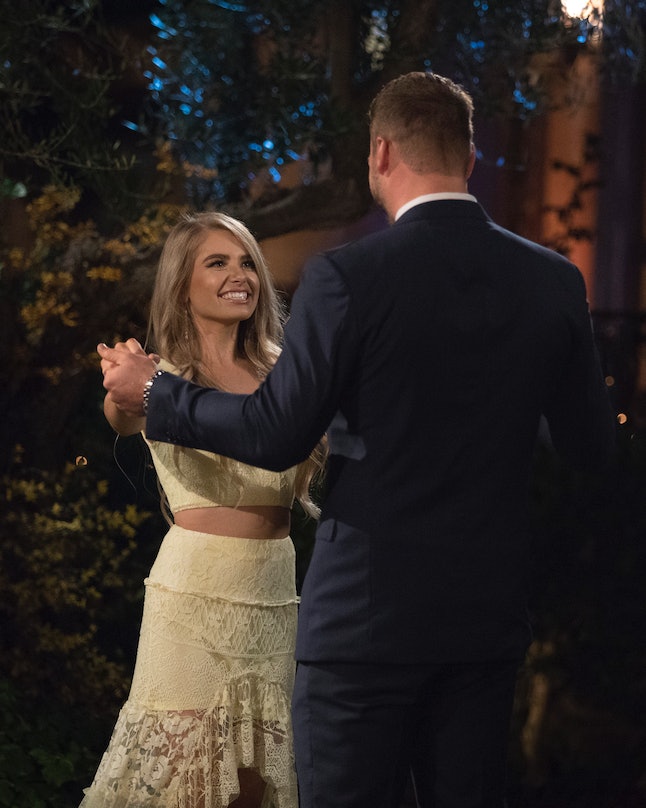 Um, what? Is Demi hinting that she’s the one who ended up with Colton at the end? It would be a HUGE spoiler, so I’m guessing that her caption is more like, "This experience changed my life," than a hint that she won. Speaking of her limo exit, can we talk about how cool it is that she wore a skirt and crop top instead of a ball gown? She’s breaking The Bachelor mold already.

Her Instagram also indicates that she’s a baseball fan.

And she’s a dog lover, as are pretty much all of the women on Colton’s season. Makes sense because he has two pups himself. He certainly wouldn’t want producers to match him with a bunch of dog haters. (Is there even such a thing?)

It remains to be seen if Demi can win over Colton, but with any luck she’ll at least win over America and put another Demi on the map besides Lovato.