Dave Pickerell, a master distiller who played a central role in the growth of Maker’s Mark bourbon and later used his expertise to help entrepreneurs start dozens of small craft distilleries, died on Nov. 1 in San Francisco. He was 62.

His son Micah, who confirmed the death, said the cause was hypertensive heart failure. Mr. Pickerell had been attending WhiskyFest San Francisco, an event that lets consumers taste whiskeys from around the world.

Mr. Pickerell was a burly former college football player who liked to tell stories and dressed in costumes for marketing events. But he was also a well-educated chemical engineer who enforced high quality standards in distilling whiskey, whether at a major company like Maker’s Mark or at small operations like Nelson’s Green Brier Distillery, which makes bourbon and Tennessee whiskey.

He was once nicknamed the Johnny Appleseed of American whiskey for having his hand in myriad brands, and for advocating for the production of higher-priced premium whiskeys.

“When we first started working on this, we hardly knew anything,” Charlie Nelson, the president of Nelson’s Green Brier, said in a telephone interview. “He helped us rewrite our business plan, raise money, buy and install our equipment, and design our production floor.”

Mr. Nelson added: “He understood the whole picture. And if we’d asked him to take out the trash, he would have.”

About 10 years ago, around the time he was helping Green Brier, Mr. Pickerell also began working with a start-up rye whiskey maker called WhistlePig in Shoreham, Vt. Rye was a particular passion for Mr. Pickerell, who viewed it as forgotten in the United States. He discovered in Canada barrels of unused rye whiskey, which WhistlePig bottled as the original iterations of its brand, and he brought his knowledge of production and aging to that fledgling distillery.

“He ended up taking a concept — large distillation and large factories — and distilled it so that entrepreneurs like us could manage it down to a small still,” said Jeff Kozak, the chief executive of WhistlePig. “There was nothing more exciting than when the still arrived and we put it together.”

The Boss Hog, one of WhistlePig’s whiskeys, inspired Mr. Pickerell to dress at product launches in a white suit and hat like Boss Hogg, the character played by Sorrell Booke on the television series “The Dukes of Hazzard.” He also donned a skintight black costume and a Zorro-like mask to celebrate the release of a version of Boss Hog called Black Prince.

“Here he is, a chemical engineer, a guy who’s not supposed to be that exciting,” Mr. Kozak said, “and he ended up being a performer.”

In 2003, Mr. Pickerell and a group of other master distillers wore Revolutionary-era costumes during an event in Mount Vernon, Va., at which they recreated rye whiskey from a recipe used by George Washington when he owned a profitable distillery.

As he sampled a tiny glass of the very spicy 140-proof rye that came out of the still, Mr. Pickerell said, “Oh, that’s really nice.” He later helped guide the production of rye at the Mount Vernon distillery after it had been reconstructed and reopened in 2007.

Bringing back a founding father’s whiskey recipe was something of an epiphany for Mr. Pickerell, who became a leading champion of rye.

“The fact is, the first American cocktails had rye in them,” he said in an interview with Garden & Gun magazine in 2014. “If you want to be authentic, you need rye on the bar.” 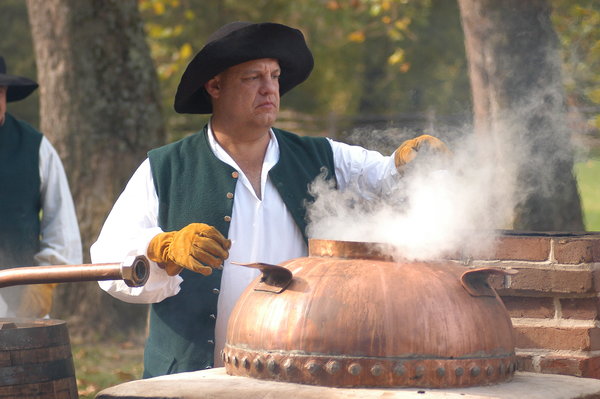 David Steven Pickerell was born on Aug. 14, 1956, in Fairborn, Ohio, near Dayton. His father, Dick, was the local postmaster and a high school football coach. His mother was Georgia Lynn (Herbert Wallis) Pickerell.

His father would drive him and his siblings around town, where the presence of local factories made him wonder about how things were made.

“I’d pepper my dad with questions,” he told Imbibe magazine in 2014. “ ‘What does that factory do? What’s that steam coming from that pipe?’ My dad would always reply, ‘The only one who knows that is a chemical engineer.’ ”

He followed that path, graduating with a bachelor’s degree in chemistry from the United States Military Academy at West Point, where he also played offensive tackle on the football team. During his 11 years in the Army, in which he rose to captain, he received a master’s degree in chemical engineering from the University of Louisville.

He then worked at a firm where, for five years, he engineered and built distilleries. His understanding of distillation, he said, was instinctive.

“I’m kind of an idiot savant at distillation systems,” he told the website The Whiskey Wash in 2015. “For some reason I can close my eyes and see molecules running around in a still, and I know where they’re going and why.”

He was hired by Maker’s Mark bourbon in 1994 as vice president of operations and master distiller. Over his 14 years at the company, it became a strong international brand, with annual sales growing from 175,000 cases to nearly one million.

After leaving Maker’s Mark, he turned to consulting, which led to his work with small craft distilleries.

“He’s responsible for teaching dozens of them how to distill and make sure they weren’t making poison,” Frank Coleman, senior vice president of the Distilled Spirits Council, said in an interview.

In addition to his son Micah, Mr. Pickerell is survived by his daughters, Anna Birney and Rebekah Smith; another son, Joshua; four grandchildren; his sisters, Terri and Tami Pickerell; and his half brother, Rick. His marriage to Jeanette (Harvie) Pickerell ended in divorce.

One of Mr. Pickerell’s last major projects was creating Blackened, a brand of blended straight whiskey, for the heavy metal band Metallica. It recently went on sale.

“They basically said, ‘We want to do a whiskey, but we don’t want it to be overly branded “Metallica,” ’ ” he recalled in an interview this year with Revolver, a hard rock and heavy metal magazine. “ ‘We want it to be a partnership deal, and we want it to be awesome. Go!’ ”

To enhance the whiskey’s flavor as it aged in brandy barrels, Mr. Pickerell decided to jolt it with Metallica recordings that emitted low-frequency sound waves. Testing, he insisted, proved that it worked.

The label does not have Metallica’s name on it, although “Blackened” is familiar to fans of the band as the name of a song from its album “ … And Justice for All.”

Beneath the image of a sound wave, the Blackened label says, “Re-mastered by Dave Pickerell.”

11/08/2018 lifestyle Comments Off on Dave Pickerell, Master of Whiskey and Rye, Is Dead at 62
Recent Posts