It's organised chaos on the floor of Qudos Bank Arena where final rehearsals are taking place for the NSW Schools Spectacular.

"This is not about sympathy, this is all about ability," says Michelle Davies, founder of the specialist performance group. 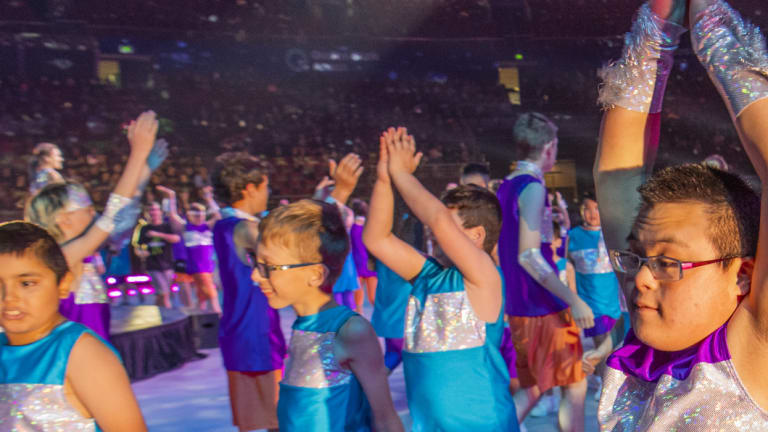 D 'Arts began with a group of 50 students from four schools eight years ago and has grown to a troupe of more than 150 performers from 28 schools across the state.

"We've got students who are deaf and signing who are dancing, kids with autism, kids with cerebral palsy, intellectual disability, all shapes and sizes," Davies says. "So all those stereotypes about disabilities are gone. They have the same opportunities on the dance floor as everyone else."

The Schools Spectacular began 35 years ago and in 2016 set a new Guinness World Record for the largest amateur variety act.

The four performances Friday and Saturday will bring together a cast of 2300 dancers, a combined choir of 2500, an 80-piece full symphony orchestra and a 25-piece stage band.

Everybody wants to be part of something bigger than themselves, as the spectacular trumpets, and Davies said she had been motivated to set up the troupe after watching the Aboriginal Dance group flourish. 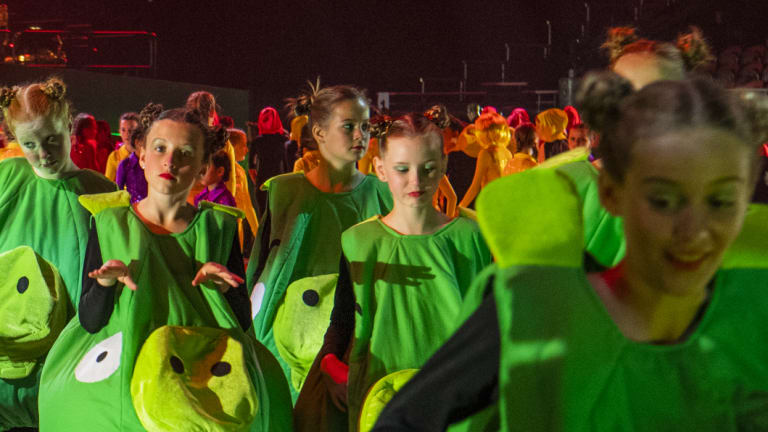 This year is to be the last hurrah for Vincent Huynh who has been at the last eight spectaculars with the D'arts Ensemble, joining up when he was in Year 5 at Busby West Primary.

According to Cecil Hills High school teacher Nimrod Jacob, Vincent is undoubtedly one of the most passionate and energetic dancers of the Schools Spectacular – "He even dances in the playground".

"I practise every day, in my home, in the backyard," Vincent affirms, arms and legs jiggling.

At his Schools Spectacular debut, dancing to Michael Jackson's Man in the Mirror, Huynh was last off stage. "We had to drag you off stage, didn't we?" Davies laughs.

Auditions opened in April and the group have come together for four rehearsals before today's full dress rehearsal. Wheelchair-bound performers are assisted by able-bodied dance captains, some of whom are past ensemble performers.

Choreographer Virginia Ferris said it was more about the process than the performance. "Teachers are always in tears because they see what the kids can actually do on stage. We never really know what's going to happen on the day. There is always that element of surprise."