DAN HODGES – Why Theresa May must tell MPs: Support my deal or quit

Theresa May’s resilience is her greatest strength. Her capacity to plough doggedly onward in the face of adversity makes Lazarus look like a member of the Worried Well. But this morning that same steadfastness is threatening to destroy her premiership.

‘This second vote stuff is killing her,’ a senior Cabinet Minister admitted to me, in reference to the widely held belief that, if the Prime Minister loses the Brexit vote on December 11, she will simply shrug it off, wring a few concessions from Brussels, then return to the House of Commons for another go.

‘Downing Street’s strategy is to win it using VAR,’ an MP claimed, alluding to the controversial video system that allowed World Cup referees to change their decisions after a second look. 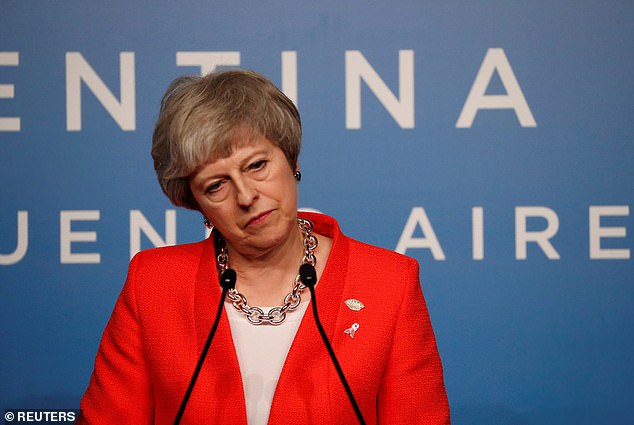 Britain’s Prime Minister Theresa May addresses the media during the G20 Leaders Summit in Buenos Aires. The PM’s plan is to make it clear that the Brexit vote taking place on December 11 is a choice between Her Deal, No Deal or No Brexit

But that’s actually the opposite of No 10’s strategy.

Its plan has been to make the vote in nine days’ time the moment of decision. To instil in wavering backbenchers and vacillating Ministers a recognition that they finally have nowhere to hide – it is Her Deal, No Deal or No Brexit.

But instead of recognising it as a time for choosing, many MPs are approaching the historic division like it’s a dress-rehearsal. ‘I’ll probably vote for her eventually,’ a normally rock-solid loyalist told me, ‘but I’m not sure I can back Chequers first time round.’

Quotes of the week

‘He said if he wanted to be sipping champagne with toffee-nosed, floppy-haired public schoolboys, he’d be off running Momentum.’

Spectator editor Fraser Nelson jokes why Shadow Chancellor John McDonnell could not accept the Politician of the Year award in person.

‘As my ever-sensitive wife Bella pointed out, “That’s pretty much a whole Waldorf salad.” ’

DJ Mark Radcliffe after remarking he had growths the size of walnuts, apples and grapes removed from his tongue and throat.

Ross Leonard, who fought off muggers armed with a machete.

‘Keep Gibraltar but don’t do this, please.’

Spaniard David Irritans reacts to news that supermarket Morrisons is to sell a savoury version of the sugary snack churros. 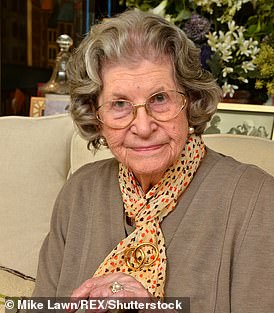 ‘One [place] was called Trumpington and the other was Six Mile Bottom. Which one would you have chosen?’

Baroness Trumpington, who died last week aged 96, on why she selected the Cambridgeshire village for her title when ennobled.

‘Suddenly a movement to centre survivors of sexual violence is being talked about as a vindictive plot against men.’

Tarana Burke says the MeToo campaign she founded a decade ago is now ‘unrecognisable’ to her.

‘A lot of grunting with someone who’s become your brother over the last few weeks.’

Actress Hayley Atwell is no fan of sex scenes. 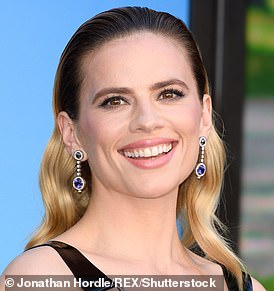 Hayley Atwell is not a fan of sex scenes

Where Mrs May hoped Britain’s parliamentarians would view her deal through the prism of the national interest they are – to their eternal discredit – seizing the chance for some expedient last- minute politicking.

On the first vote they intend to express crowd-pleasing displeasure at the Prime Minister’s imperfect compact with the EU.

Second time round they will – grudgingly – vote for the devil they know, claiming to be safeguarding Britain from the perils of a cliff-edge Brexit or a complete Brexit reversal.

Those charged with steering Mrs May’s deal through the Commons are alive to the havoc this narrative is creating. Chief Whip Julian Smith has told May he believes the idea of holding a second vote is ‘nuts’. ‘Julian thinks we have to have a definitive result first time around,’ a friend says.

May’s team are equally conscious of the danger. ‘If people think they can vote this down without consequences they are mistaken,’ a senior aide warned. ‘If we lose the vote we’re entering uncharted territory’.

In fact, Smith and Team May are wrong. The idea of a second vote is not merely ‘nuts’, nor does it simply cast the Government and country adrift in pilotless waters. It represents the most boneheaded act of denial ever indulged in by Britain’s political class.

There is no prospect – none at all – of the EU giving significant new concessions in the face of a rejection by Parliament. We know this because everyone from Donald Tusk to Jean-Claude Juncker has told us so. Even if the EU bureaucrats were for some inexplicable reason minded to bow to the wishes of a rebellious Commons, the EU heads of state would soon bring them to heel.

Merkel, Macron and Pedro Sánchez have their own domestic audiences. And they are not about to let German, French and Spanish voters see them getting pushed around by Jacob Rees-Mogg and ex-Brexit Minister Steve Baker.

There is also another major flaw with a scenario that envisages the British Prime Minister being despatched like a modern-day Oliver Twist to beg the European Commission for more.

In the instant Mrs May loses the vote, she ceases to be Prime Minister. Her authority will be destroyed. The authority of her Government will be destroyed. Why would any European leader even bother to sit down with her when they know power no longer resides in Downing Street but in the offices of the Members for Uxbridge and South Ruislip and Leeds Central?

If Theresa May wants to stand any chance of prevailing in nine days’ time she has to kill off the idea that MPs will get a second chance. More specifically, she has to stop doggedly ploughing on, and make one final, courageous stand.

She should issue a clear, unequivocal statement that she regards the vote on the 11th as a vote of confidence in her premiership. If the Commons defeats her, she will step down, with all the consequences that would bring.

Centrist Tory MPs need to know that a vote against her deal will plunge their party into chaos. That they will have ejected their own Prime Minister at a moment of national crisis, potentially opening the door to the most rabidly Left-wing government in British political history.

Hardcore Tory Brexiteers need to know the days of using Mrs May as a human shield are over. That their bullish claims about being able to wrangle a tough new deal from Brussels are actually going to be put to the test, and that responsibility for delivering the Brexit they promised the British people will finally rest with them.

And Labour MPs need to know the time when they could define themselves purely by what they are against is also drawing to a close. If they wish to defy their leader – and his vicious acolytes –by driving through a second referendum, good luck to them.

I’m told Downing Street Chief of Staff Gavin Barwell is about to be named as one of The Bloomberg 50, the elite list of ‘people who changed the game in global business in 2018’.

The good news for the embattled No 10 gatekeeper is that the accolade is set to be bestowed at a lavish, star-studded bash in New York City.

The bad news is the awards will be held on December 10, the day before the Prime Minister’s do-or-die Brexit vote.

If, as they claim, they have found an alternative to No Deal they must explain what that deal is, and how it can command a parliamentary majority. But above all, they and their parliamentary colleagues have to realise that the votes they cast will have consequences – for both the country and themselves.

But at the moment May is reluctant to force them to confront those consequences. Her famous doggedness and sense of duty compel her to carry on regardless.

‘She won’t threaten to step down,’ an ally says, ‘not because she wants to cling to the job, but because she doesn’t think she can just walk away at a moment like this.’

Theresa May’s resilience has carried her through some desperate moments. But unless she finds a way to convince Parliament next week’s vote will have no action replay, it could also lead her to her most desperate defeat.

The European Research Group’s attempt to unseat Theresa May via a motion of no confidence ended in humiliation.

But I understand Downing Street was contemplating a dramatic counter-stroke in the event the 48 names necessary for the contest had been reached.

‘The whole point of the no-confidence system is it’s conducted in secret,’ a Downing Street insider explained to me, ‘but the ERG were encouraging members to put their letters on the internet to boast about how many names they had. 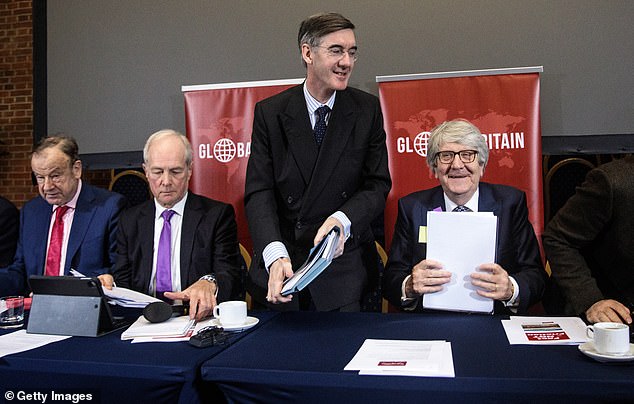 ‘So all we would have needed to do was remove the whip from them, they would no longer have technically been Tory MPs, and their letters would have become invalid.’

One senior Brexit rebel claimed they were alive to No 10’s plans, and had prepared their own response. ‘We’d have gone to court and argued the letters were valid because they were put in by MPs who held the Tory whip at the time they were submitted. And we’re pretty sure we’d have won.’

If Theresa May loses next week’s vote, she really could end up in the dock.

As if the Prime Minister didn’t have enough problems, word reaches me of simmering unrest among the Government’s army of special advisers.

‘All the Cabinet changes mean a raft of new people have been brought in at short notice,’ one disgruntled SPAD complains, ‘and they’ve all been given higher salaries than us existing staffers.’

There is even talk of a work-to-rule that would paralyse Whitehall. Though amidst the chaos of Brexit, would anyone notice?

12/02/2018 lifestyle Comments Off on DAN HODGES – Why Theresa May must tell MPs: Support my deal or quit
Recent Posts