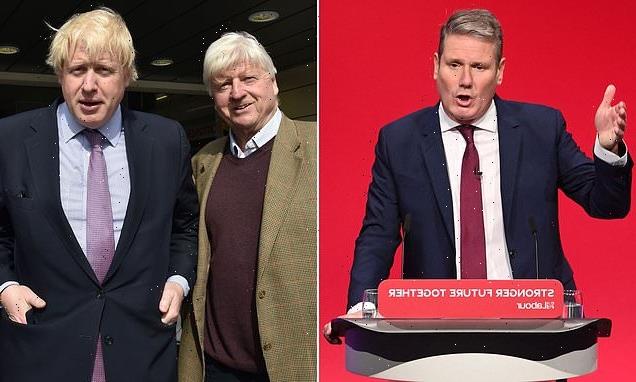 The most significant part of Keir Starmer’s speech on Wednesday was the bit that wasn’t supposed to be in it. It came – with sledgehammer irony – at precisely the moment he was articulating how his strong family upbringing had instilled within him the importance of dignity and self-respect.

‘My father was a toolmaker,’ he explained, before breaking from the published text to extemporise: ‘Although in a way, so was Boris Johnson’s.’ When he delivered the line, at first I thought I’d misheard it. Then, when I realised I hadn’t, I thought I’d misunderstood it. And then I realised the truth. The leader of the Labour Party really had used the Prime Minister’s father to attack Boris for being ‘a tool’ from the main stage of his party conference.

A few moments later, I got a text from a Tory adviser. ‘Does Starmer realise Boris buried his mother on Monday?’ it said.

I suspect he didn’t. But I also suspect it wouldn’t have mattered. As we saw in Brighton, Starmer is essentially a decent man. But he is also a weak man. And he is leading a rabble. 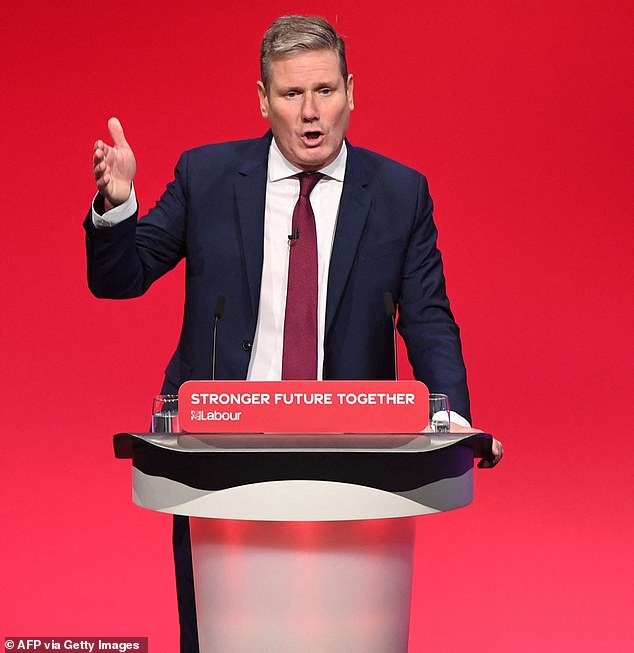 Since Starmer walked off stage – the heckling of his more deranged party members ringing in his ears – aides have done a respectable job of spinning several myths.

The first is that he successfully took on the Left and drove through the package of internal reforms that he believes are necessary to usher Labour back into power.

But the reality is the most important plank of his reforms – a change to Labour rules that would have broken the stranglehold Corbynite members have over the election of their leader – was dead on arrival on the South Coast. And as we will see in the months and years ahead, that retreat will cost him, his party and his country dear.

The second myth was he ‘did a Kinnock’ and ‘delivered some hard truths’ to activists. He did neither.

Take, for example, the most vicious scar carved across Labour’s face – antisemitism. Wednesday was Starmer’s opportunity to tackle the issue head-on.

He didn’t mention it once. Earlier in the week, former Labour MP Ruth Smeeth, who is Jewish, had stood on the same stage. Looking her persecutors in the eye, she told them: ‘You failed. We’re still here.’

The best Starmer could manage was a name-check for another Jewish former Labour MP, Louise Ellman, who had rejoined the party. His way of drawing a line under Labour’s five-year antisemitic nightmare was, in effect, to boast: ‘Look, we’ve got one of our Jews back!’ 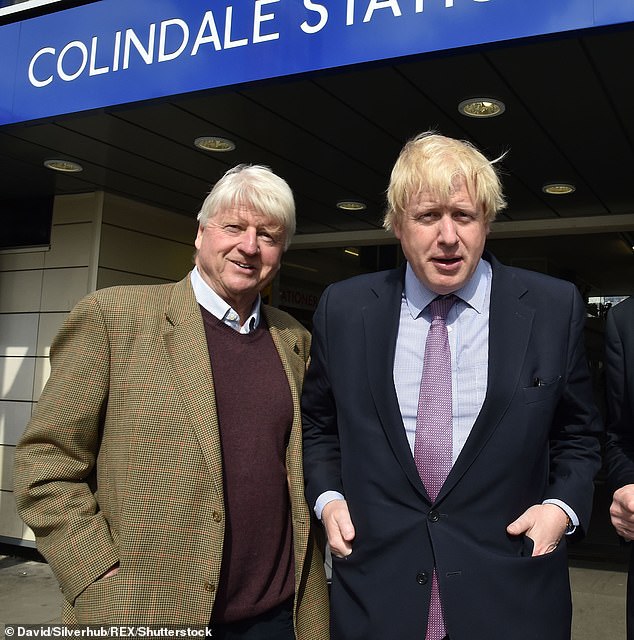 ‘My father was a toolmaker,’ Starmer explained, before breaking from the published text to extemporise: ‘Although in a way, so was Boris Johnson’s’

As Starmer’s rambling address continued, and the heckling intensified, some people noted the bizarre nature of the interventions. They ranged from the disgusting (as he spoke about his mother’s brave fight against the illness that would eventually claim her life) to the surreal (‘Free Julian Assange!’).

But there was a reason the interruptions were so unfocused. Labour’s leader wasn’t brave enough to give his Corbynite opponents anything of significance to interrupt. Where Kinnock directly berated Liverpool’s Militant council for ‘hiring taxis to scuttle round a city, handing out redundancy notices to its own workers’, Starmer simply made an oblique reference to Labour’s 2019 manifesto.

Who had written that manifesto? Whose bankrupt political ethos was contained within it? Who had led Labour to catastrophic defeat on the back of that manifesto? Starmer didn’t have the guts to say.

His other attempt to challenge his party wasn’t delivered with clarity or courage, but hidden within a rhetorical device. ‘If they are so bad, what does it say about us?’ he asked in relation to the Tories.

A nation waited expectantly for the answer. It’s still waiting.

The final myth to emerge from Labour’s 2021 seaside gathering was the most pernicious.

It was also the one seized upon most hungrily by Labour’s exhausted and embattled moderates. Namely that the tide has finally turned, and the rout of the Corbynites had begun.

It hasn’t. What we saw last week was not the beginning of Starmer’s battle for the heart and soul of his party, but the end.

Brighton was the high-water mark. The next time Labour gathers, it is likely to be its final conference before a General Election. There will be no place for internal rows. No opportunity for arcane but important rule changes. ‘We must unite and focus our fire on the Tories’ will be the mantra. And Keir Starmer will be leading it. Labour’s leader had the chance to sanitise his party. To take on the Corbynites, Momentum and their hard-Left fellow travellers and purge them. Instead, he chose to contain them. To leave them in place and hope that everyone forgets they existed.

But people won’t forget. Because Corbyn and his acolytes won’t let them. Yes, their chance of a frontal assault on Starmer’s leadership has gone. So now they will embark on a prolonged period of guerrilla warfare against him. 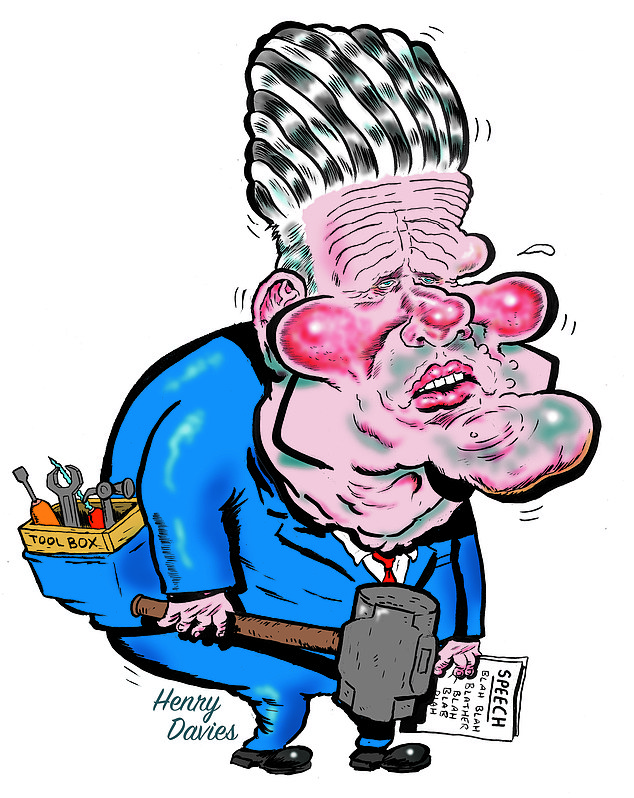 As Starmer’s rambling address continued, and the heckling intensified, some people noted the bizarre nature of the interventions

They will point out – with justification – that the membership bloc they control still holds significant influence in any future leadership contest.

And they will cling to the belief that contest won’t take place against a backdrop of Corbynite defeat at the polls, but a defeat they can pin squarely on Starmer and the Labour centrists.

Look at the narrative arc of Labour’s week.

It began with Starmer throwing his own MP Rosie Duffield under a bus when he said it was unacceptable for her to say only a woman can have a cervix. It continued with Deputy Leader Angela Rayner calling Conservatives ‘scum’.

And it ended with Starmer telling off-colour jokes about the Prime Minister and his father, simply to buy cheap laughs from delegates.

This was supposed to be the moment Starmer and his team began to erase the ‘Save Palestine! Eat the rich!’ graffiti from Labour’s brand. But they couldn’t.

And there’s a reason they couldn’t. They’re too scared to. Starmer and Rayner don’t really think all Tories are ‘scum’. Or that the path to power leads to ignoring basic female biology, or calling the Prime Minister ‘a tool’.

But they believe that’s what their members think. And they’re right.

So they continue to pander to them, like schoolchildren who laugh along with the bully in the belief he won’t turn his attention and fists on them.

Last week I wrote how the hopes of Starmer’s MPs that he was the next Tony Blair were set to be dashed. This week we learnt that Keir Starmer isn’t even destined to be the next Theresa May.

Back in 2002, the then Conservative Party chairwoman showed how to really lay it on the line to your activists.

‘Let’s not kid ourselves,’ she said bluntly, ‘there’s a way to go before we can return to government. There’s a lot we need to do in this party of ours. Our base is too narrow and so, occasionally, are our sympathies. You know what some people call us? The nasty party.’

After their week in Brighton, Keir Starmer and his party still want to kid themselves. To believe that masterful obfuscation is a viable alternative to confrontation. That collective amnesia is preferable to acknowledging the sins of the past. That Corbynism can be coaxed and cajoled and finessed into the dustbin of history.

Fine. Sir Keir can kid himself all he likes. But he won’t fool the British people.

10/02/2021 lifestyle Comments Off on DAN HODGES: Keir Starmer's a weak man in charge of a rabble
Recent Posts