It’s been a great week to bury bad government. Two of the greatest infrastructure projects in the land hit financial grief. Normally it would have been headline news. Instead no one shows the slightest interest. The Department for Transport has long had a simple agenda. A cynic might sum it up as: give London anything it wants, but starve the north of investment until it gets the point and moves south. It is called regional policy, applied ruthlessly since 2010.

A rail tunnel has been built under London, at nearly twice the diameter of any other line and for no other reason than to spend splendidly. Crossrail this year has demanded an extra £2.3bn on a price tag of some £15bn, with no known completion date. Worse is happening at its sister project HS2, whose £56bn budget – up from an original £34bn – has gripped its backers in mendacity for five years or more. Leaks from all over are now predicting it will cost from £80bn (the Treasury) to more than £100bn, with no realistic completion date.

Megaprojects are now hollering at Whitehall’s gate, sensing a government on its knees and spending recklessly. Hinkley Point power station, the nuclear deterrent, jet fighters, a Heathrow runway, a Thames super-sewer, all are both controversial and staggeringly expensive. But their canny contractors know the game. You get a patsy minister with an unrealistic budget, sublet the project against indemnities and, whatever happens, declare it too expensive to turn back. Then you slam in invoice after invoice – and watch the Treasury turn to rubber. No one ever got poor by building infrastructure for government.

Non-capital public expenditure is now desperate. A third of state secondary schools have deficits of up to £500,000. Childcare and old-age services are shrinking back to the statutory minimum, slashed by a third in eight years. Library closures reached 127 last year. Yet the Institute for Public Policy Research reports that public spending in the south has risen by £3.2bn since 2010, against a fall of £6.3bn in the north. The gap is widening. 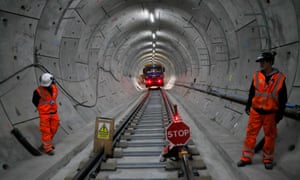 This week no hair turned in Whitehall as the Treasury was hit for more for Crossrail. Its mind was elsewhere. The chancellor even declined to kill Crossrail’s prodigal son, Crossrail 2, due to start in three years’ time at a mind-numbing £30bn, more than HS2 to Birmingham. This is being proposed when London tube journeys are flatlining, bus journeys plummeting, and the mayor, Sadiq Khan, refuses to raise fares. Why should Londoners, in effect, be subsidised by northerners? Transport planning in the capital is a massive squander.

In reality, Crossrail has not done badly if it ends up just 15% over budget, and it must be finished. The predicted sacking and later resignation this week of its chairman, Terry Morgan, was bizarre. He was viewed as a success in July when the transport secretary, Chris Grayling, also appointed him to chair HS2, from which role he also jumped. Either this was all a serious mistake by Grayling, or he hoped the leaked sacking might save his own skin.

Unlike Crossrail, HS2 is not too late to cancel. Ministers pledged to parliament it would not cost a penny over £56bn. Small wonder they sat for two years on a report by accountants PwC warning the figure was rubbish. As shadow chancellor, Ed Balls warned that Labour had doubts about spending £50bn on the project, when he must have known even that was hopeless. Last September a persistent critic of HS2, the National Audit Office, pointed out that land acquisition costs alone had risen threefold.

In reality, no one cares about megaprojects when they soar past a billion. They obey the law of vanishing interest – that a project’s scrutiny varies inversely to its cost. A cabinet will bicker all morning over £10,000 for a playgroup, but shrug at £100m to a bunch of rail consultants. All David Cameron’s vanity projects passed the Commons on a nod. The rule is, when you do infrastructure you get anything you say it costs.

Except not in the north. No one travelling these days between Lancashire and Yorkshire, by road or rail, can doubt this region has been starved of transport investment. Grayling has just effectively killed off the HS3 upgrade of the Leeds-Manchester route, in favour of a lesser scheme. Electrification is on hold, while Britain is balking at on-board computer signalling – which could dramatically increase network capacity. We are getting a solid-gold 250mph train, with pot holes in every road.

Few people other than those with snouts in the HS2 trough truly believe this venture is remotely the rail priority of the age. Even some of its backers feel it should at least forget coming to London’s worst-connected station, Euston, and stop at Old Oak Common, west of Paddington.

The trouble with big projects is that they drain the system not just of money but of sanity. They are instantly corrupted by politics. Neither Philip Hammond, when he was at transport, nor Grayling had the guts to take a deep breath, call a halt and reallocate the cash. At each turn in the road, common sense was drowned by noise. They have other problems. The line of least resistance is to pay up. But we all know who is really paying.

• Simon Jenkins is a Guardian columnist