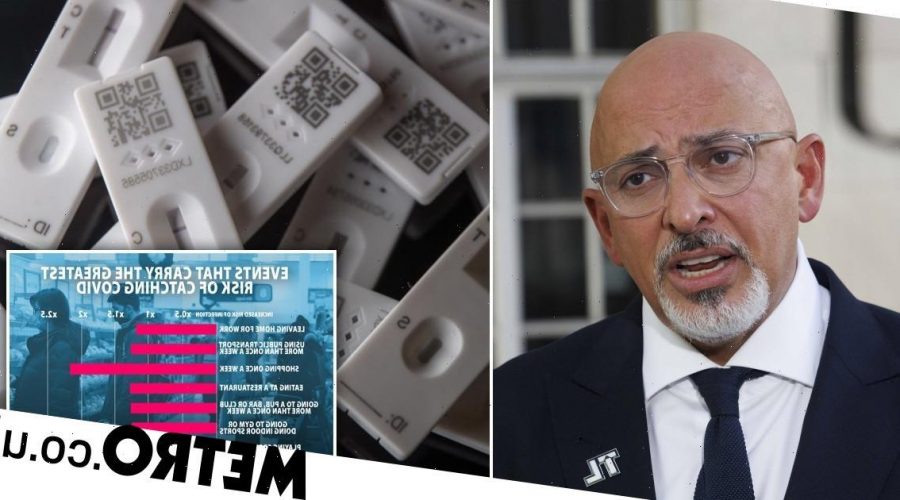 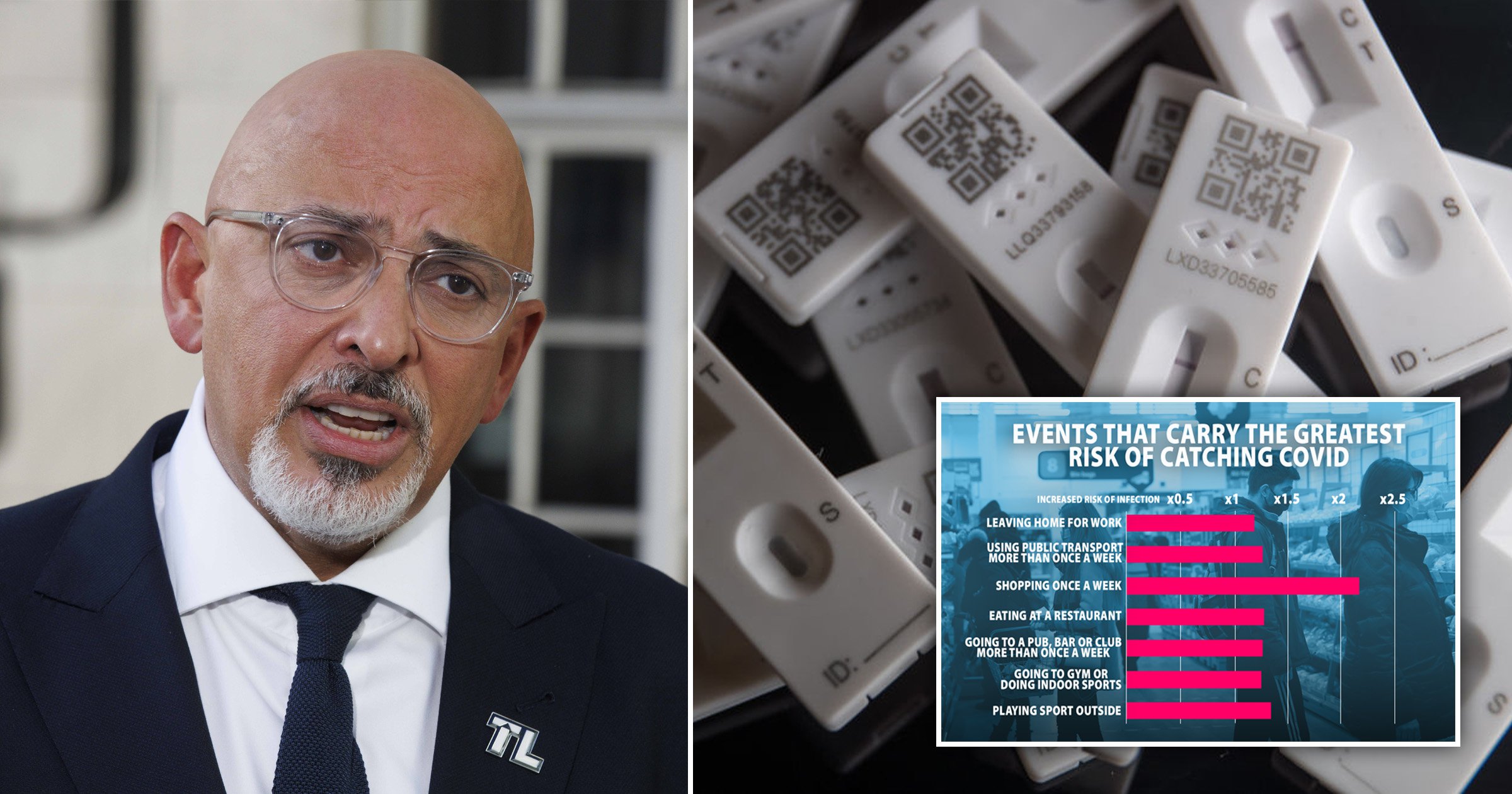 The government has confirmed it is looking at cutting the time required for people to self-isolate after a positive Covid test from seven days to five.

Boris Johnson said that he is considering advice on whether to make the change for fully vaccinated people, in a bid to reduce pressures on the workforce from absences.

Speaking to broadcasters during a visit to a vaccination clinic in Uxbridge today, the Prime Minister said: ‘The thing to do is to look at the science. We are looking at that and we will act according to the science.’

Cutting the self-isolation period from seven days to five could ease absences in critical services, such as the NHS, supply chains and schools, it is hoped.

Yesterday, Education secretary and former vaccines minister Nadhim Zahawi predicted a ‘bumpy few weeks’ ahead but said following the US in reducing isolation time would help as his staff develop plans to cope with up to a quarter of teachers off at a time.

Last month, the isolation time in the US was cut from 10 days to five days, although people were told to wear masks after their time was up.

Mr Zahawi told Sky’s Trevor Phillips on Sunday that cutting the time to five days in the UK too ‘would certainly help mitigate some of the pressures on schools, on critical workforce and others.

‘But I would absolutely be driven by advice from the experts, the scientists, on whether we should move to five days from seven days. What you don’t want is to create the wrong outcome by higher levels of infection.’

He added: ‘I hope we will be one of the first major economies to demonstrate to the world how you transition from pandemic to endemic, and then deal with this however long it remains with us, whether that’s five, six, seven, 10 years.’

But not all felt that cutting the isolation time would be a helpful move just now.

He said: ‘We’ve only just gone from 10 to seven. We went from 14 to 10 some time ago, now we’ve gone from 10 to seven with quite a lot of extra steps – a couple of tests, vaccination and all those other things to get released if you possibly can – but there’s no suggestion yet that we should move to five.

‘They’ve done it in some limited parts of the world but the data suggests that’s a risk, particularly at high levels of infection.’

A Downing Street official spokesman said after Mr Johnson’s comments: ‘You’ll appreciate Omicron being a relatively new variant, we get more information fairly regularly so you can expect certainly UKHSA (UK Health Security Agency) to lead that work, working with the Covid taskforce which is based in the Cabinet Office, will continue to look at the evidence for what is the right period of isolation.’

He said: ‘Of course, as the Prime Minister said, if it is possible to go further then we will do so.

And he added: ‘If it is possible to go further, we’d want to act quickly but it needs to be based on the latest evidence and that work is still ongoing. We certainly haven’t received any further updated advice.’

It comes amid hope that Omicron may have peaked with new cases falling for five days in a row — evidence that the booster vaccines rollout and Plan B restrictions are working.

Another 141,472 Covid infections were reported yesterday — down 6.7% in a week — as hospital bosses across the country reported a weekly drop of almost 10% in coronavirus admissions.

Data suggests cases peaked more than a week ago in London, epicentre of the Omicron wave where one in ten was believed to be infected in the week after Christmas. The rate of increase is now falling in every region in England, apart from the north-east.

Chris Hopson, NHS Providers chief executive, said he now believed the health service would cope but warned: ‘If you look outside London, then there’s no doubt the NHS front line is going to be stretched perilously thin.’

Scientists warned the return of schools last week could yet upset calculations as Omicron appears to affect children worse than previous variants.

More than a fifth of new cases are in children and teenagers, with school staff absences already at 8.5%.

‘More children have been admitted with Covid in the last three weeks than the whole of the first wave,’ said Prof Christina Pagel, of Independent Sage. ‘A new school wave will prolong the Omicron wave for everyone, and further risk school staff.’

Prime minister Boris Johnson had insisted his ‘Plan B’ measures in England would work, telling critics: ‘What we want people to focus on is exercising caution.’

Scotland’s first minister Nicola Sturgeon had criticised Mr Johnson for not toughening restrictions in the run-up to Christmas. But while the number of people on ventilators fell from 797 to 704 across the country in the last five days, it rose by 13 in Scotland.

Wales’s first minister Mark Drakeford said yesterday it would be two weeks before cases peaked there.

Prof Kevin Fenton, Public Health England’s regional director for London, said it remained in a ‘critical phase but we’re past the peak’.

He told Sky News: ‘Data from the Office for National Statistics suggests the peak may have occurred at or just about New Year. We’re seeing reductions in overall case rates across the city.’

Yesterday’s 6.7% fall in new cases is the largest weekly drop since the middle of November.

But the UK became the first country in Europe officially to record more than 150,000 Covid deaths at the weekend.

Prof Dame Anne Johnson, of the Academy of Medical Sciences, warned that the hopeful figures from the Local Government Institute were not yet official. ‘There has been big variability across the country,’ she said.

‘We saw this wave arrive first in London and across the country, and rates of infection are still increasing in all areas except London. We don’t know how far that is going to continue.’

She added: ‘That said, rates are still higher in London than in the rest of the country.’

Nadhim Zahawi also insisted lateral flow tests will remain free, the education secretary has insisted amid reports they could be scaled back despite soaring Covid cases.

The education secretary said there were ‘absolutely’ no plans to stop free tests.

The Sunday Times reported the kits could soon be limited to high-risk settings and those with symptoms.

Scotland’s first minister Nicola Sturgeon said this would be ‘utterly wrongheaded’, as Labour called it the ‘wrong decision at the wrong time’.

But education secretary Mr Zahawi said yesterday: ‘I saw that story this morning, which I was slightly puzzled by because I don’t recognise it at all. This is absolutely not where we are at. They will continue to be free.’