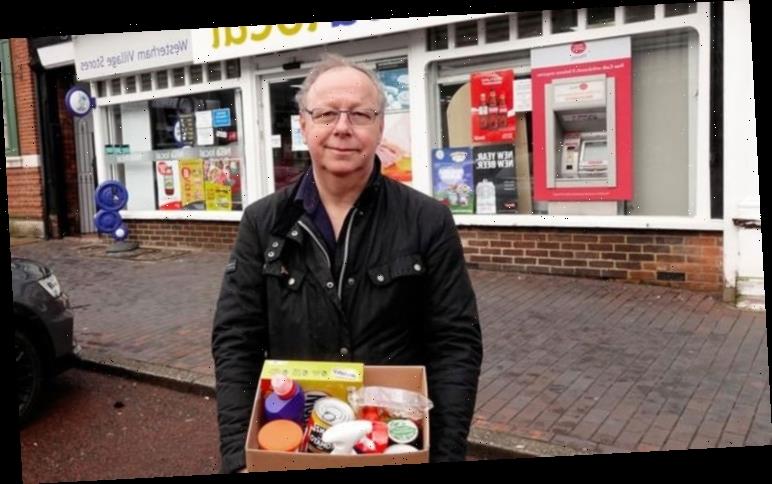 But there is a price to pay for shopping for essentials on your doorstep. A Daily Express investigation has revealed that buying 15 branded staples from convenience stores could cost as much as 19 percent more in total than at a large supermarket. Our findings show that a basket of goods from a selection of small, local shops costs £31.09, compared with the £26.06 you would pay at a big supermarket. Individually, some items were significanlty more expensive than in a supermarket.

This followed complaints to the authority from angry customers that the cost of hand sanitisers had risen dramatically at some small shops.

At the time, amid panic buying, the CMA said the average reported increase covering products such as toilet rolls, flour, meat and eggs at small stores was 160 percent.

Now our investigation has found that staple foods, such as Heinz tomato soup and Weetabix cost around 14 percent more at convenience stores than supermarkets.

The average price of a tin of Heinz baked beans at supermarkets is 85p yet at local stores they sell for £1.09, a 28 per cent hike. A box of 80 PG Tips tea bags costs £2 at supermarkets but £2.65 at convenience shops, a 32 per cent difference.

But the small retailers did offer some bargains. A large tin of Nescafé Azera coffee selling at £5 at one small shop was much cheaper than any we could find at Tesco, Sainsbury’s or Waitrose. An equivalent product was selling for £5.49, which is almost 10 per cent more expensive. We also found that pineapples were 29 per cent cheaper at one convenience store. 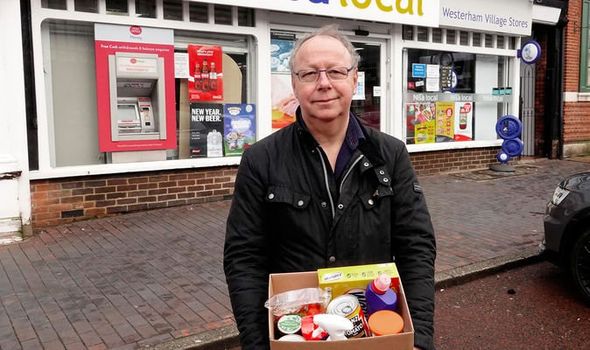 But these were the only two cases where the convenience shops undercut the big players in the food supply chain. Daily Express consumer champion Dean Dunham said: “Local convenience stores have played a really important role during lockdown and helped keep many communities going.

“But shoppers do need to be aware they’re likely to be paying more for branded staples compared to larger supermarkets, which have the advantages of bulk buying and discounting. Over the course of a year, the figures involved could really add up.”

The frequency of people using convenience stores has increased, particularly for older shoppers, who have followed government advice to only make short, essential journeys.

Association of Convenience Stores chief executive James Lowman said: “There are over 46,000 convenience stores across the UK, within which there will inevitably be differences between pricing on products based on location, size of business and ownership. Compared to their supermarket counterparts, convenience stores are under more pressure on operating costs and buying prices but despite this, they still manage to provide competitive prices for customers. 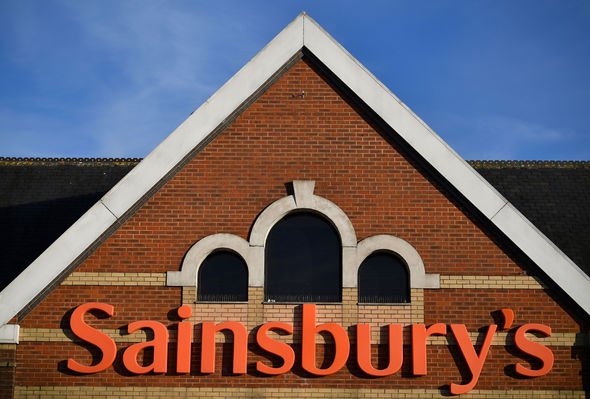 “Ultimately, consumers are the decision maker and the evidence we’ve seen in recent years is that they are shopping in local convenience stores more often and for a wider range of products and services.

“The convenience sector has been consistently outgrowing the rest of the grocery market for the last decade, which is a testament to the work that convenience stores are doing not just to provide products at competitive prices, but also as businesses that are at the heart of thousands of communities across the UK.”

However, it is not just the independent local stores that are costing customers more.

Consumer watchdog Which? today reveals that supermarket convenience store shoppers are spending as much as £320 more a year on groceries.

The organisation did price comparisons between Sainsbury’s and Tesco supermarkets and Sainsbury’s Local and Tesco Express, which showed customers choosing the smaller local stores were paying up to £320 and £280 respectively. They gave an example of Sainsbury’s Batchelors Noodles BBQ beef flavour (90g) selling for 60p at the supermarket and 75p at a convenience store, a price increase of 25 per cent. 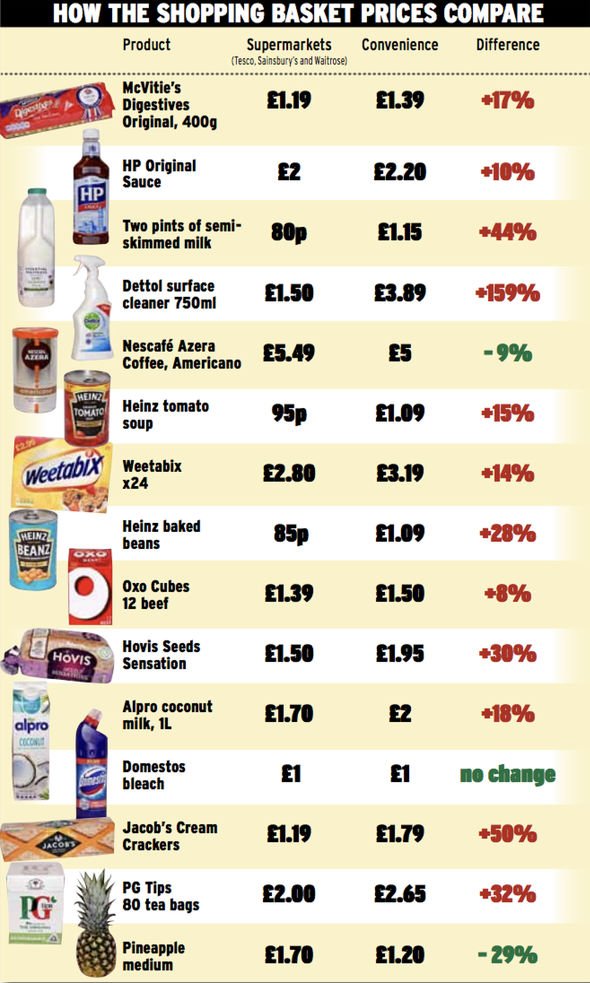 The British Retail Consortium says small retailers have little choice but to pass on their higher running costs to customers.
Tim Ironside, director of business and regulation, said: “Retailers always seek to offer their customers the best possible prices. However, smaller format stores can incur proportionally higher costs than larger outlets, which explains why sometimes products may be charged at a higher price.”

“Brexit-related red tape, rising global shipping costs and good commodity prices, as well as the weight of forced closures and restrictions for many retail businesses, means that pricing pressures are stacking up for retailers.”

Food inflation eased to 0.2 percent in January compared to 0.4 percent in December.

In the Which? investigation, researchers looked at the weekly price of 48 own label and branded groceries for five months last year across Sainsbury’s Local and Tesco Express to compare prices at their supermarket counterparts.

The shopping list of 48 items meant customers could be paying 9.5 percent more a year (£322) at Sainsbury’s Local than they would at a big Sainsbury’s supermarket.

Products with the biggest price difference were a 400g can of Napolina chopped tomatoes, a third more expensive at Sainsbury’s Local, and a 250g packet of McVitie’s ginger nut biscuits, just over a quarter pricier at Sainsbury’s local compared to its larger supermarkets.

Surprisingly, Tesco own label products were almost a quarter (23 percent) more expensive in Express stores than in supermarkets, including Tesco 0% Fat Greek Style Yogurt. Natalie Hitchins, head of home products and services at Which?, said: “Convenience stores have been a huge help to many of us during the pandemic. However, our research shows that shoppers who rely solely on supermarket convenience stores rather than their larger stores for their groceries, are paying a premium.

“Customers will generally get more for their money at larger supermarket stores, but for some products, the price difference may not be significant so it is always worth checking prices to make sure you are getting the best deal.”

A Sainsbury’s spokesman said: “We’re committed to offering our customers the best possible value. The price of our products is influenced by a range of factors, including promotions which can vary between Sainsbury’s supermarkets and convenience stores.” 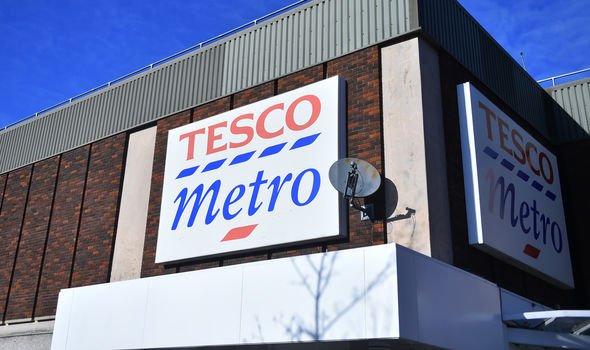 Tesco said: “Our Tesco Express stores are mainly in built-up areas where unfortunately rents, rates and the operating costs for these stores are higher. The difference in prices of some products reflects these increased costs, but our prices remain competitive as we strive to offer great value to our customers.”

The Competition and Markets Authority wants people to contact them if they are concerned about pricing. The organisation has set up a Covid-19 taskforce to look into complaints about price gouging and other issues resulting from the pandemic.

The CMA said a small number of businesses were behaving badly, adding: “Those who inflate prices to profit off the backs of their customers are adding to their distress at a time of particular vulnerability and maybe severely damaging their own reputation.

“Consumers are likely to remember those businesses who attempted to profiteer and may well vote with their wallets once this crisis ends. For many businesses, the crisis could represent an opportunity to do the right thing and, as a result, develop relationships with new customers.”

Shoppers affected by unreasonable price rises are encouraged to report “poor business behaviour” to the CMA.

02/05/2021 lifestyle Comments Off on Convenience stores: the price of shopping locally
Recent Posts