Now in its eleventh season, Chunky Move's Next Move program identifies and supports emerging choreographic talent. Next Move alumni are some of the most interesting and successful contemporary choreographers around, and the addition of Lauren Langlois and Joel Bray to this community bodes extremely well for the future. 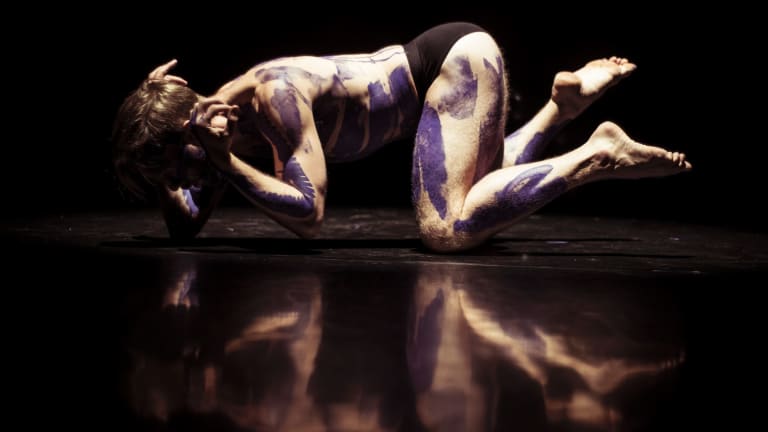 Langlois' Nether and Bray's Dharawungara are two very different works in form, approach, physical expression and in the accompanying media that the choreographers highlight alongside their own dancing bodies. However, they both take risks without abandoning a scaffolding of clearly articulated structures. In their own ways, both works are a reflection of lineage and history: for Langlois, through a movement signature that threads through her work, and for Bray, as a reflection on and of his heritage as a Wiradjuri man.

Nether opens the program with sharp beams of light that expand to divide the stage into liminal, malleable and artificial segments. Langlois and fellow dancer James Vu Ahn Pham slip between these worlds, and as they move, it is almost as though their bodies and movements are fragmented by the passages. Langlois toys with the grotesque and the beautiful, but what is most effective in this work is the way she uses the dynamic shifts between stillness and movement in unexpected ways.

Bray's Dharawungara also plays with dynamic shifts, as he draws the audience into his story with humour and pathos. In this work, Bray performs his own version of a Wiradjuri rite of passage, lamenting through movement, story and sound a ritual that was stolen from his family, and therefore one that he has never seen or participated in. Bray reclaims and reinterprets this traditional rite through the context of performance and theatre. He is accompanied by sound artist Naretha Williams, and the journey is deeply emotional to witness.

Both Bray and Langlois are exceptional performers and dancers, and in Next Move 11, both have put forward strong choreographic statements that claim space for themselves as art makers. As Chunky Move moves into a new phase (artistic director Anouk van Dijk will be leaving the company) we can only hope that this important program will continue.