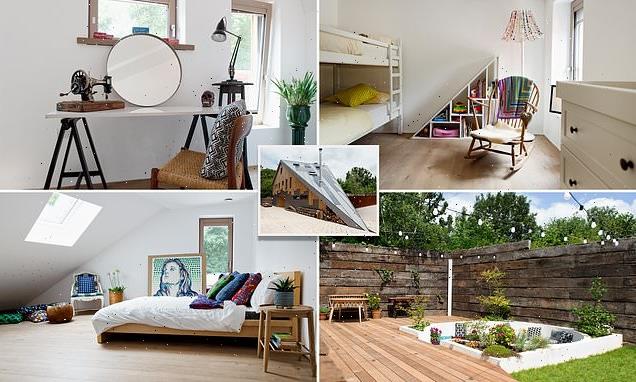 Carpenter reveals dream of building Grand Designs triangular house on half-acre land he bought for £160,000 hemmed in by a main railway line and a busy A-road – but blows £190,000 budget within MONTHS

A master carpenter has revealed his dream of building an incredible Grand Designs triangular house on a half-acre land he bought for £160,000 hemmed in by mainline railway and busy road.

Olaf and Fritha, from West Sussex, appear on the Channel 4 programme tonight as they set out to build forever three-bedroom home on the piece of scrap land.

But the couple immediately faced near catastrophic problems after buying the land when they discovered a mainland sewer was running through the centre of the space.

Because there must be a three meter distance between the sewer line and any foundations, the buildable area on the scrap of land was halved.

Olaf said: ‘The sewer has dictated the shape of the building. Seeing as it’s impossible to move, we’ve had to work with it. We’re stuck with it. We’ve paid the money, so we’re screwed.’

And months after they finally started the build in early 2020, the couple admitted they were struggling to stay within their £190,000 budget and had been forced to apply for a new larger mortgage to finance the project. 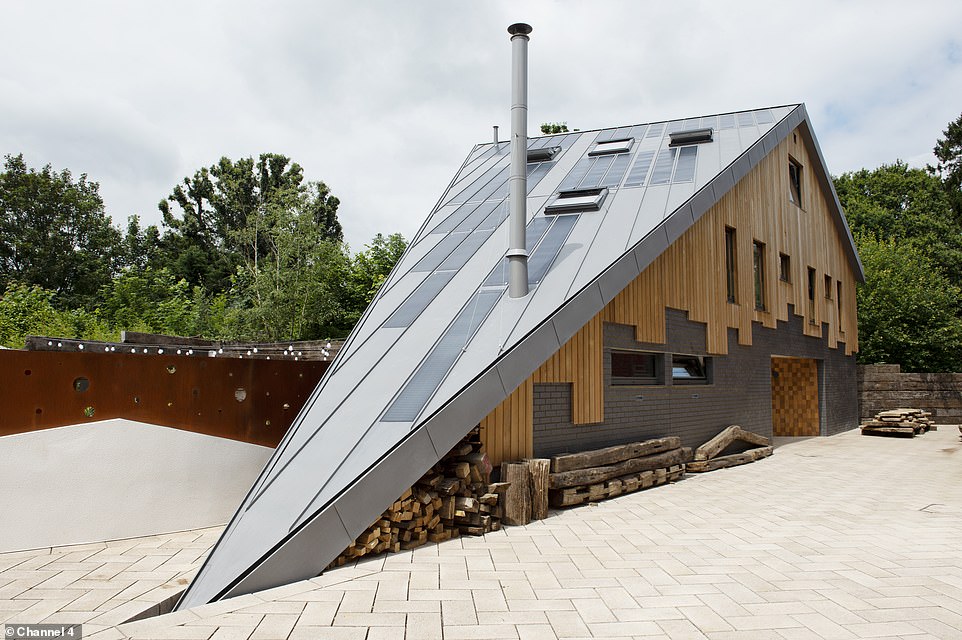 Olaf and Fritha, from West Sussex, revealed their dream of building an incredible Grand Designs triangular house on a half-acre land they bought for £160,000 hemmed in by mainline railway and busy road – but struggled to control their budget 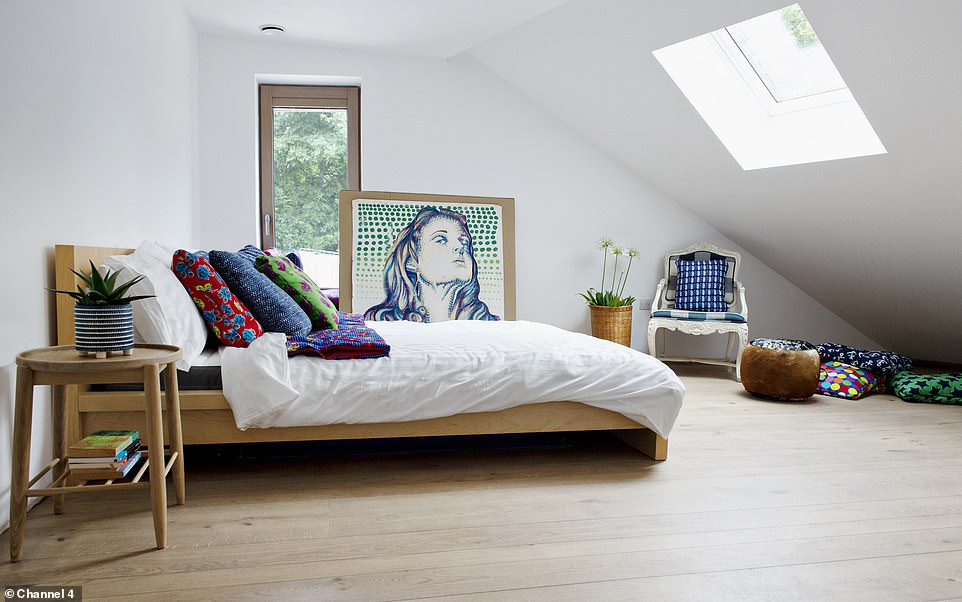 The couple dreamed of creating a unique and modern forever family home with a three bedrooms in which they hoped to raise children (pictured, their guest room) 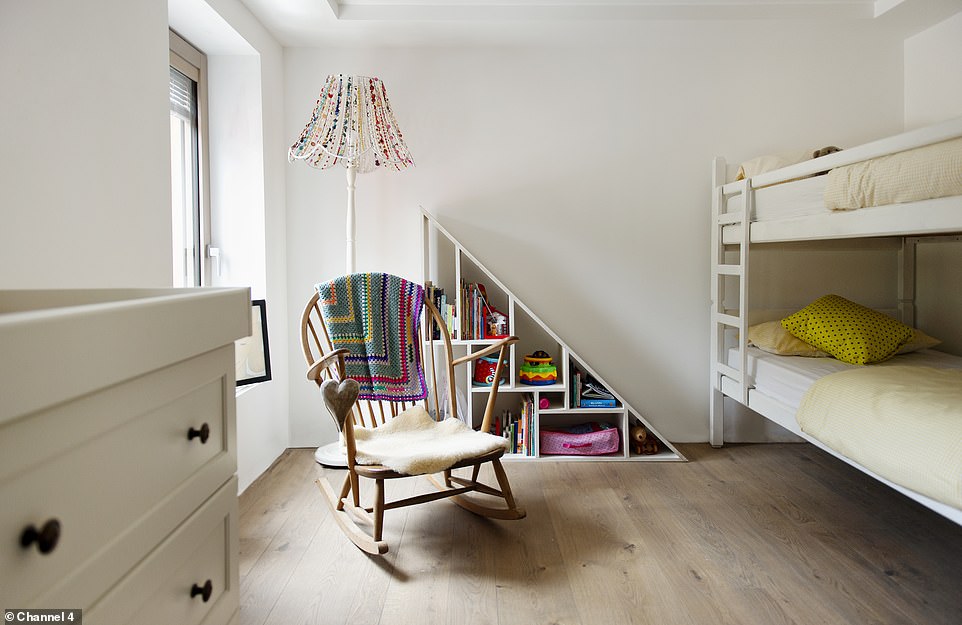 During their appearance on the programme, the couple also underwent IVF treatment in order to have a baby (pictured, the nursery)

Olaf and Fritha met on Tinder and said they ‘didn’t want to follow the paths of others’, as she revealed: ‘By the third date, I was totally head over heels.’

Fritha ran an ethical business importing fabrics from India, while Olaf was a carpenter specialising in precise high end interiors.

Kevin McCloud met with master carpenter Olaf, who was facing the biggest challenge of his career – creating an oasis for himself and partner Fritha on a small slice of land in West Sussex, which happened to be surrounded by a mainline railway and a busy A-road.

Not only that, but half of the plot couldn’t even be built on due an underground mains sewer. All they were left with was a very small triangle on which to build their future life together. 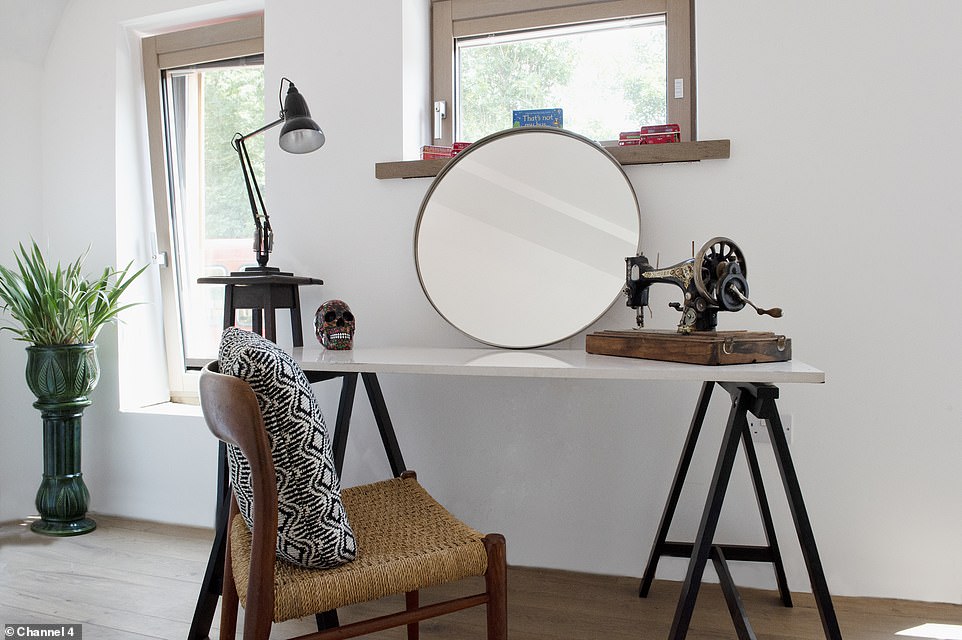 Olaf and Fritha were determined to create a simplistic yet stunning home, but due to the unique triangular shape of the property, were forced to create much of their furniture from scratch (pictured, Fritha’s study) 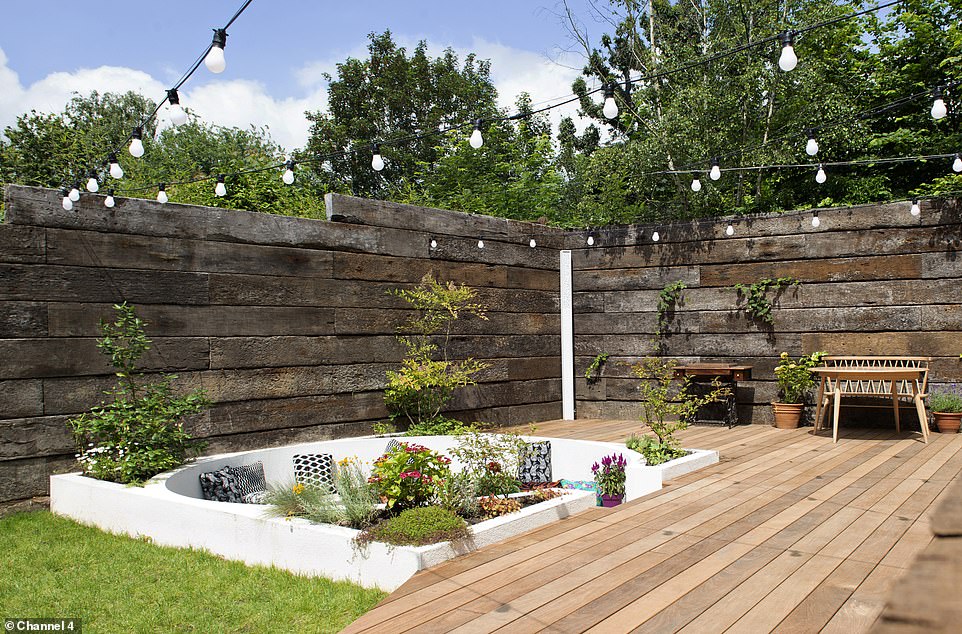 Fritha said: ‘People walk past all the time and say, “Hey you realise you’ve bought a plot of land you actually can’t build on because there’s a sewer in the middle.”

In early 2020, Olaf and Fritha began clearing the site but uncovered even more underground surprises, like a defunct septic tank.

Olaf said: ‘I have been thinking of building my own house for 20 plus years. The biggest challenge is the sewer. We can’t build over it.’

He said he was planning to build the majority of the house himself, with Fritha adding: ‘We can do whatever we want here.’ 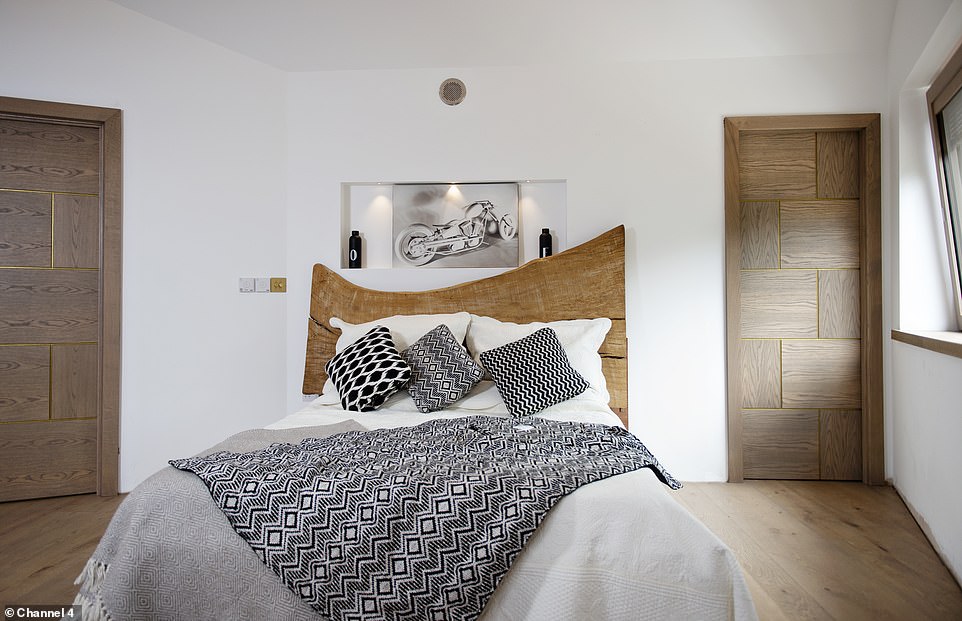 The master carpenter worked tirelessly, and almost single handedly, for 15 months in order to complete the build for his family (pictured, one of the bedrooms)

Olaf planned to build a meaty handbuild timber frame to support two upper floors with 17 triple glazed windows which would work to keep out noise as well as vibrations from the traffic.

The roof would be covered in solar panels while the building would be clad in sleek black brickwork and timber.

The ground floor would also house an open kitchen living space with a triangular snug.

Meanwhile an acutely angled first floor would squeeze in a study, a bathroom and two bedrooms. Upstairs there would be a master suite with a bathroom. 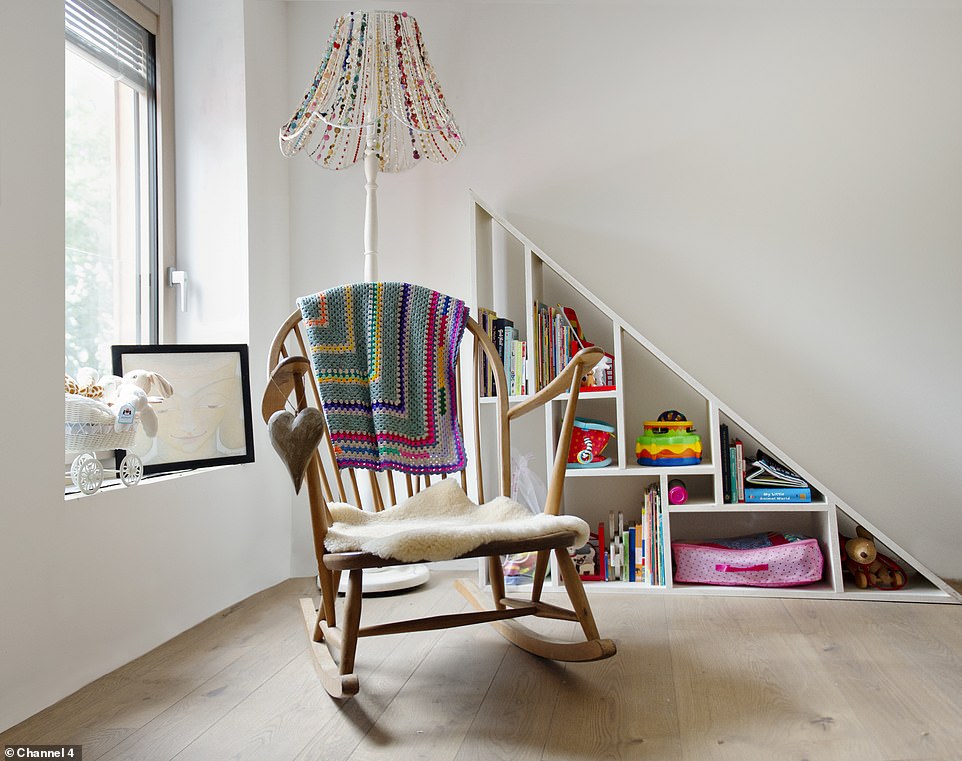 The acutely angled first floor squeezed in a study, a bathroom and two bedrooms (pictured, the colourful nursery)

And outside, the space would also work hard, with an outdoor kitchen and a huge circular firepit.

But early on they confessed they hadn’t drawn up any plans for a budget, Fritha saying: ‘Making this land buildable has cost us a fortune.’

The couple wanted to finish the project in 12 months and Olaf asked for the help of a close colleague to help get started on the project.

They also hoped to start a family, and had been trying for a child for over two years. During the build, they stayed with Fritha’s parents in Guildford and started IVF.

Speaking about their hope to get pregnant, Olaf said: ‘This is what we have been working for for years basically.’ 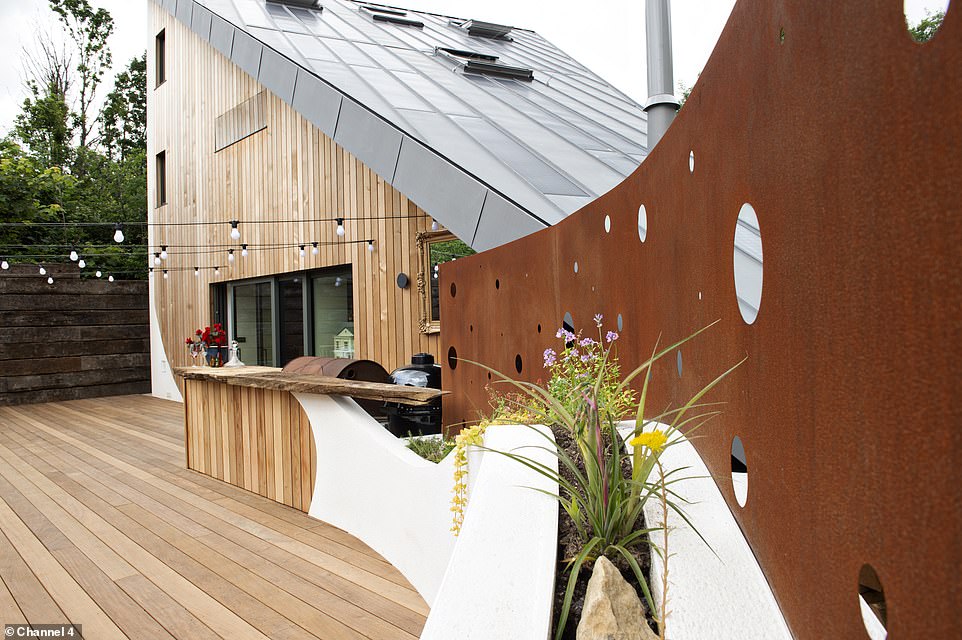 Months after they finally started the build in early 2020, the couple admitted they were struggling to stay within their £190,000 budget and had been forced to apply for a new larger mortgage to finance the project

Meanwhile Fritha said: ‘We’ve had one pregnancy and it ended up in miscarriage.’

Olaf added: ‘Building a house, you can control it to a degree. But this is completely uncontrollable. So there is an air of uncertainty which is quite daunting.’

Early the next morning, the couple travelled into central London for some egg harvesting.   But there was still a major bump in the road to their future happiness – the issue of money.

Olaf said: ‘There was quite a tremendous overspend on the groundworks. It was unforeseen circumstances. It’s going to go over by about £50,000.’ 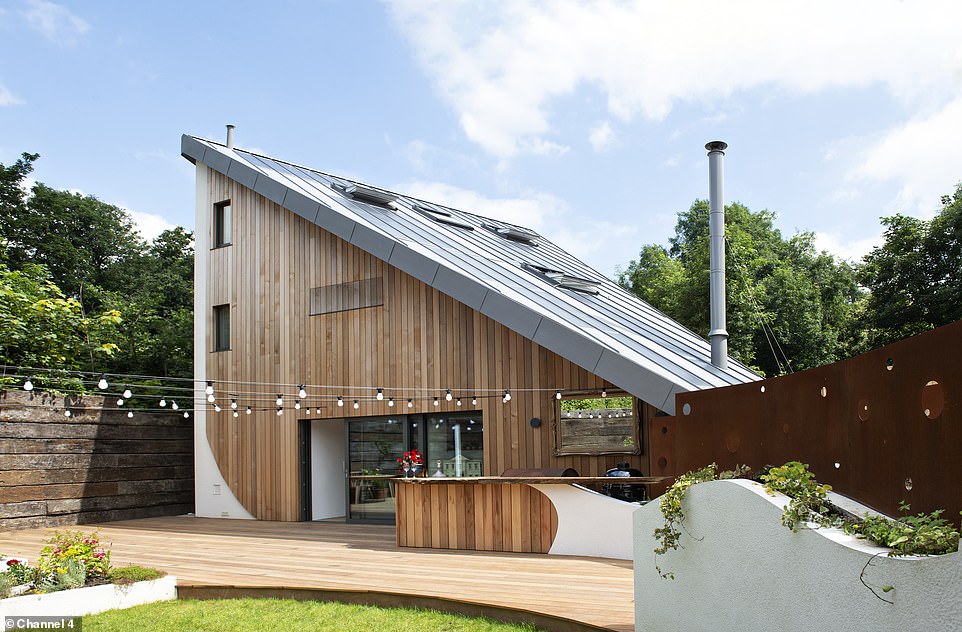 Fritha said: ‘We will run out of money and then we’ll be in a situation where we will need to beg and borrow more.’

After taking a pregnancy test in a portaloo on site, the couple learned they were pregnant on camera.

Fritha could hardly contain her delight, admitting: ‘Getting a positive pregnancy test is huge for us.’

By the following month, Kevin returned to the site and saw the spaces inside had become enclosed.

However in September 2020, Olaf’s financial problems caught up with them. He was forced to return to his paid work to cover the costs of the site, and the building project slowed down. 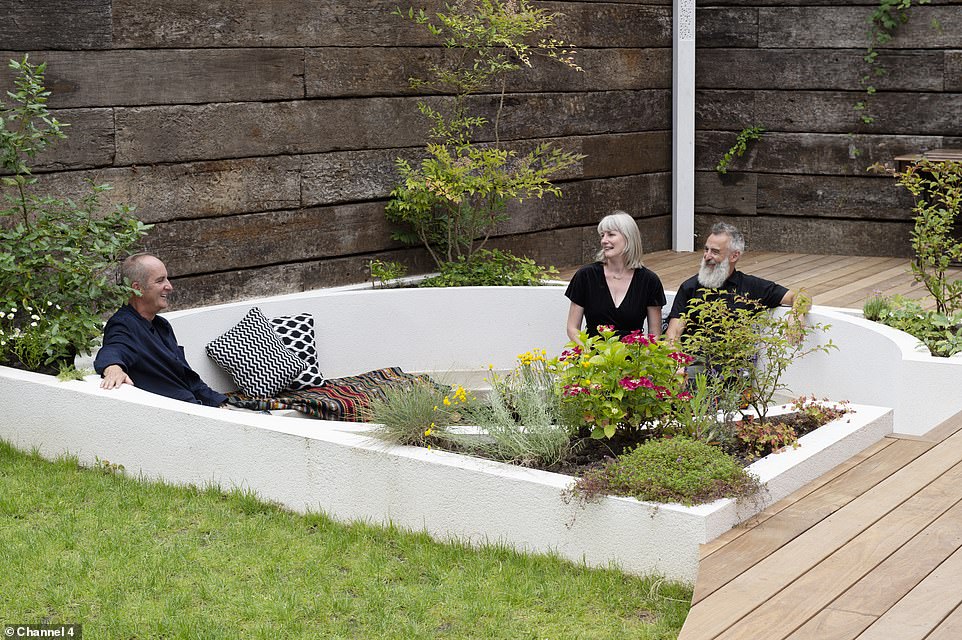 Olaf and Fritha met on Tinder and said they ‘didn’t want to follow the paths of others’, as she revealed: ‘By the third date, I was totally head over heels’

He asked friends to work on the site instead, admitting: ‘It’s extremely important to have friends here that understand me and understand my needs and I get on with.’

By October, there was no news about expanding his mortgage and funds quickly began to dwindle.

When Olaf was not at work, he worked tirelessly on his house to keep it warm, but also silent.

He said: ‘Because of the railway and the road, sound needs to be eradicated. The amount of material in the makeup of the wall will pretty much annihilate any sound coming through.’

The couple invested £30,000 of their budget into glass windows for the house – however there was a hiccup. A number of the window’s handles had been installed on the wrong side. 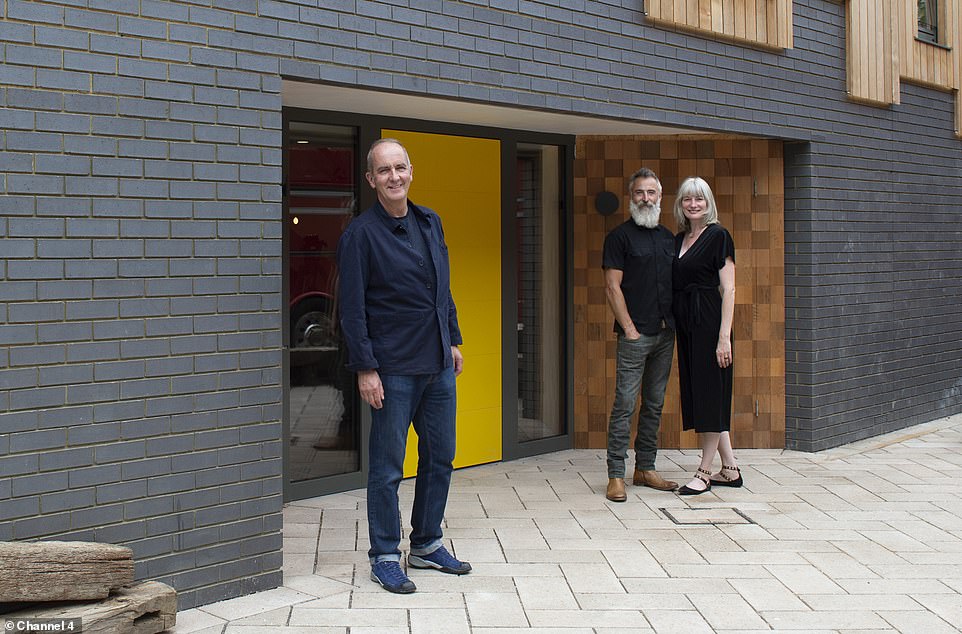 When Olaf was not at work, he worked tirelessly on his house to keep it warm but also silent by soundproofing the property from the busy traffic and mainline railway 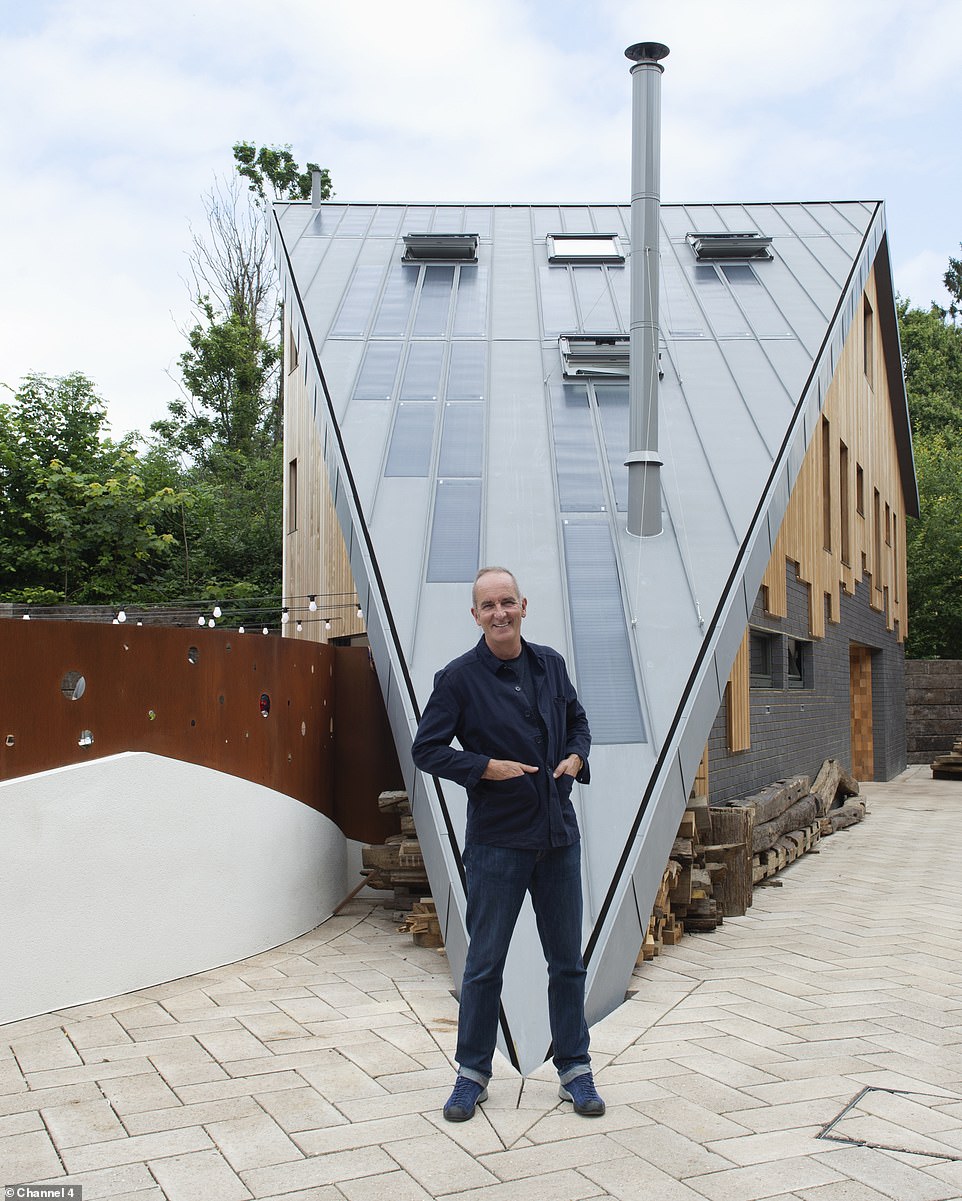 The building was small but every detail was precise, and cleverly designed. The couple even made each step of their staircase into a storage space

Olaf said: ‘When I  saw all the windows and the handles were on the wrong way, I lost it a bit.

‘Out of the 17 windows, nine of them are on the wrong side. It’s impossible to live with.’

Already on the brink financially, for Olaf the perfectionist, it could prove be an expensive issue to put right.

Olaf said: ‘It does take it out of you. If we had money I’d sleep. I’m sure rich people sleep.’

And if the bank didn’t agree the new mortgage of £240,000  in the next fortnight, the project would come to a grinding halt.