Will the real Kim K please stand up! Instagram collage divides fans as they struggle to tell the reality star from her many lookalikes – but can YOU spot which snaps are genuine?

An Instagram account which specialises in exposing how celebrities edit and filter their photos, has sent followers into a frenzy with collages of famous faces – challenging them to spot the real superstar from the fakes.

Celebface, which has a 697,000-strong following, today shared a collage of images, asking fans to spot the real pictures of Kim Kardashian among nine choices.

The challenge left followers confused, with some claiming none were the real Kim, while others were sure that only one showed the reality star.

The majority of commenters claimed three pictures show the mother-of-three who is married to Kanye West, but how many can you identify?

Scroll down for reveal 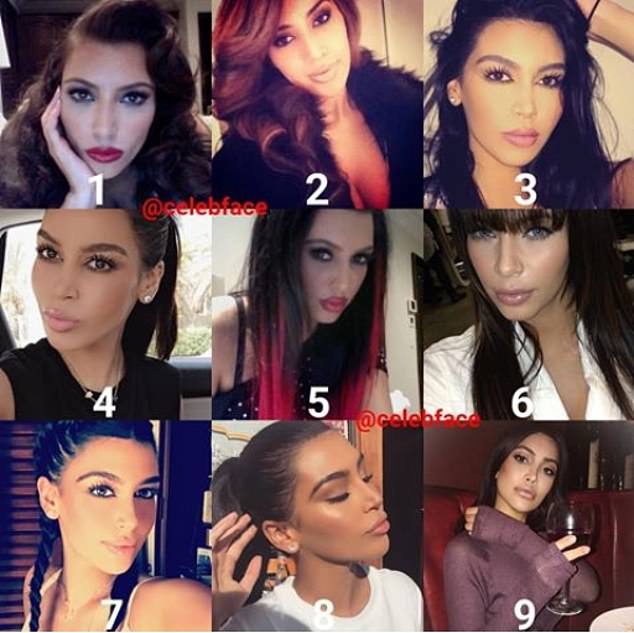 Celebface, which has a 697,000-strong following, today shared a collage of images, asking fans to spot the real pictures of Kim Kardashian among nine choices

In fact, the collage only contains three images of the reality star, while the rest are lookalikes.

Three of the images show Dubai-based Sonia Ali who is originally from London.

The beauty blogger models for her sister Fyza’s make-up tutorials and fans say she looks so much like Kim, they can hardly tell them apart.

Another snap shows lookalike Mony Monn, a model who allegedly appeared in a rumoured sex tape with Kanye West that was reportedly doing the rounds in 2012. 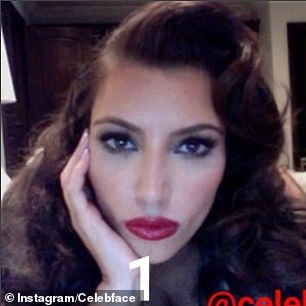 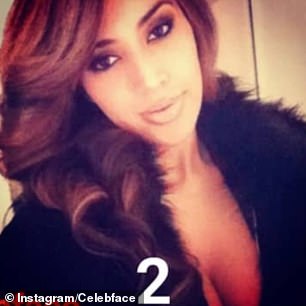 The real deal! Picture number one shows the real Kim in 2011 when she chanelled Old Hollywood glamour for a set of sultry selfies (left). That’s not Kim! This snap shows model Mony Monn who allegedly appeared with Kanye West in a rumoured sex tape in 2012 (right) 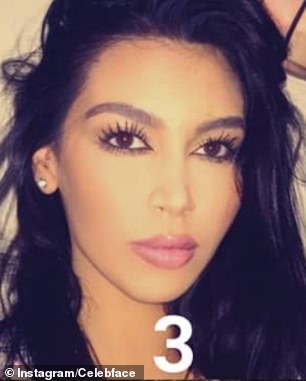 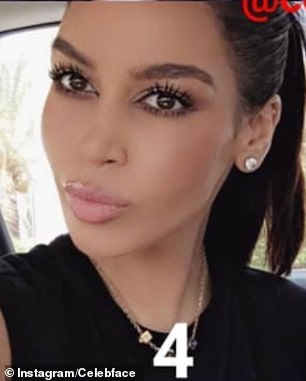 Are you sure that’s not Kim! London beauty blogger Sonya Ali who lives in Dubai has made a name for herself by posing for her sister Fyza’s beauty tutorials – and fans can barely tell her and Kim apart 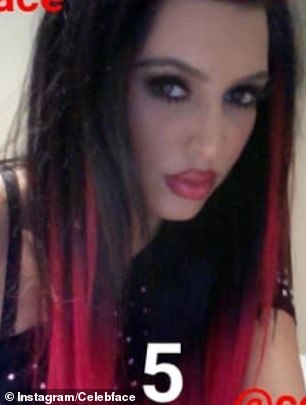 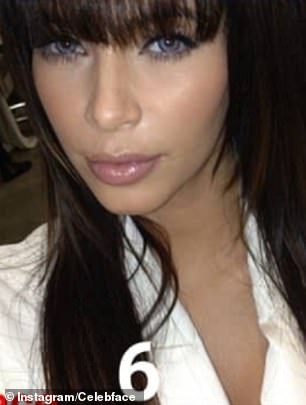 That’s a tricky one! It certainly doesn’t look much like Kim, but this is the star with red dip dyed hair for a music video in 2011 (left). Again you might be fooled by this snap, but it is the real Kim wearing blue contact lenses (right) 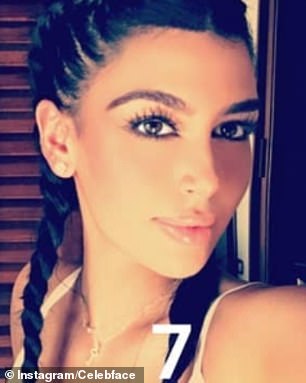 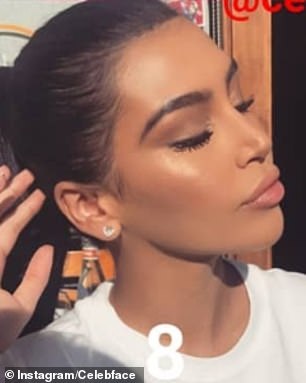 Fooled again! Kim is a fan of boxer braids but this snap shows Dubai-based beauty blogger Sonya Ali. Despite Sonya’s striking resemblance to Kim, she claims she can’t see it herself 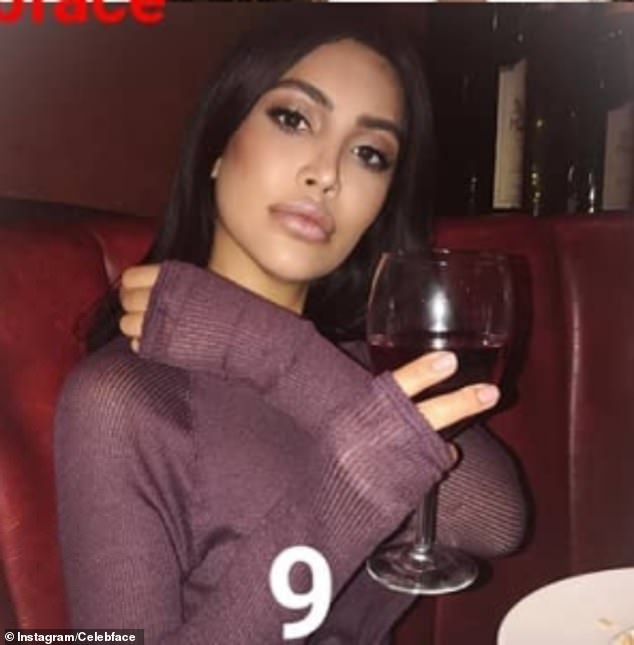 That’s not Kim! Kamilla Osman, an influencer with a striking resemblance to Kim also appears in the collage. She was linked to rapper Tyga after his split from her sister Kylie Jenner

Kamilla Osman, an influencer known for being a Kim K lookalike who was linked to Tyga following his split from her younger sister Kylie, also appears in the collage.

Celebface has become famed for comparing Instagram photos shared by stars including Kendall Jenner, Bella Hadid and Irina Shayk with the original images snapped on the red carpet or for magazine shoots.

They point to how the images have been doctored to hone waists and sculpt jawlines before being shared with fans on Instagram, by sharing side by side comparisons of social media posts and original images – supplemented with short looping video clips that make the almost imperceptible tweaks clearer.

The mystery celeb-watcher behind the Instagram account previously told FEMAIL that the feed is not about ‘hate’, but for people convinced the stars are ‘perfect’. 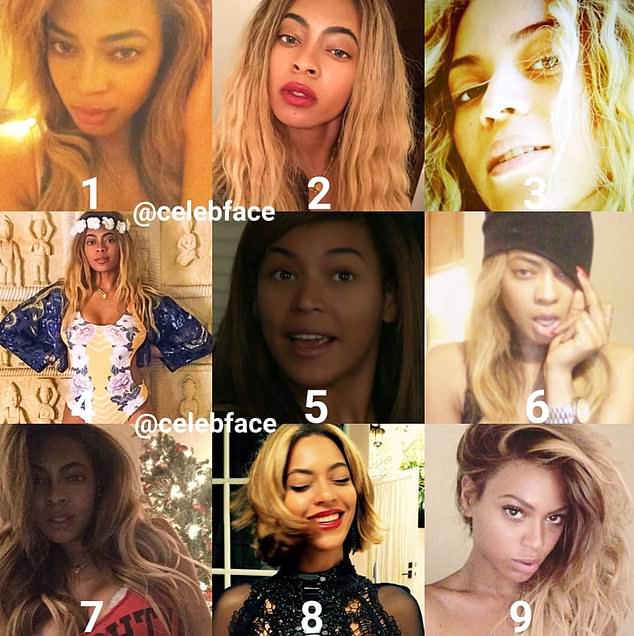 Celebface has posed a similar challenge with Beyonce, asking fans to pick out the real images of the singing superstar. Images 3, 5, 8 and 9 show the real star, while the rest are lookalikes

11/06/2018 lifestyle Comments Off on Can you spot the real Kim Kardashian?
Recent Posts