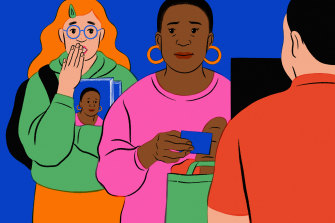 Maxine Beneba Clarke has had some unexpected encounters since her work was included on school reading lists.Credit:Illustration: Nhung Le

I was high-schooled in the ’90s in suburban Sydney. My HSC English program was Shakespeare, Orwell and Austen. Which, as a Black kid of Afro-Caribbean heritage, hardly stoked my writerly inclinations. So, some 20 years later, when my publishers told me they’d had a call for copies of my book Foreign Soil to be sent for consideration for the VCE syllabus in my now home state of Victoria, I laughed. Foreign Soil is written partially in accented English. The short stories are set in the Black Panther squats of 1960s London; inside Villawood Detention Centre; in the middle of the 2011 Tottenham riots; in Kingston Jamaica, during the 1961 Windies cricket tour of Australia. Compared to the white canonical texts I studied at school, this wasn’t a case of same-same, but different, it was a case of different-different, and waaaay different.

I was shocked when eight months later, a teacher messaged asking if I’d visit her class, now my book was on the text list. Requests started pouring in. There are nightmarish tales of authors whose work has been included on HSC or VCE exam papers – of harassment and bullying by hordes of disgruntled keyboard-warrior students who didn’t get the poem or thought the extract of writing was too difficult. Being book-listed is a little different. Students are guided through the work – which usually means they’ve read and understood it enough to be able to have a good chat.

The time I changed my mind…

Oh, what it would have meant to 17-year-old me, not just to study the work of an Afro-Black author, but to see my classmates engaging with it! So I went. I visited classrooms in Geelong, Werribee and South Yarra; in Point Cook, Altona, Kew, and Berwick; in Glen Iris, Bacchus Marsh, and Truganina. Foreign Soil was on the literature booklist, which meant classes were small, and students generally engaged. For the first couple of years, there wasn’t too much contact outside classroom visits: the odd email or Facebook message, asking a question or saying how much they’d enjoyed the work. But I did notice that when the book was studied by a younger class, there’d be mouthier engagement. Like that grade 10 kid who messaged me with: “We study your work at school. It sucks. Kill me now.” To whom I unceremoniously shot back: “Lol. Sucked in. I am the new Shakespeare. Read it and weep.” His I am typing now ellipses hovered in the comment box for several minutes, before eventually trailing off into stunned silence.

Then came 2021, another teacher messaging me: “Your memoir The Hate Race is on the English Booklist for next year”. This one was a complete curveball. The book is a childhood memoir, set in the racially volatile schoolyards of Australia in the 80s and 90s. Would I still be doing school visits for this text? I thought seriously about it. Memoir gives readers the impression they know you. If you get the tone right, perhaps even that they’re a dear friend. Boundaries blur. You’re not just talking with readers about literary techniques. You are the character they’re analysing. I knew from writers’ festival sessions how different that would be, and surmised that this text would actually be studied better on its own. 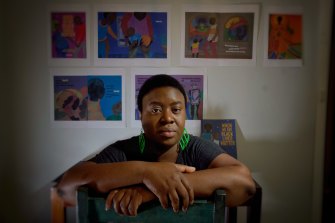 Kids gonna kid though – and if they have a question or a comment, they will find you. There was the Year 12 boy, enraged at the behaviour of my childhood bully in the book, who sent a message: “I want to punch Greg Adams in the face, and I wasn’t even there.” The kid who begged me to come to her 18th, just for five minutes because her friends bet her she couldn’t “get Maxine from The Hate Race” to attend. (Part of me wanted to show up, and drink them all under the table, just to see their shock). IRL, there was the spectacled girl in the line next to me at Coles, who stared at me with a weird smile on her face, then blurted out, with no introduction: “I’m-on-the-debating-team-too!” To which I couldn’t help laughing. “I AM FREAKING OUT RIGHT NOW,” she clarified, her cheeks flushing.

I once encountered a small child in my local doctor’s surgery waiting room. “That’s Maxine! I went to her dress up party!” she said. The week before, I’d had a launch at the local bookshop, for my picture book Fashionista. The little reader stared up at me, eyes wide. You could see the wheels turning. Tears filled her eyes. She started howling. She backed away, the look on her face one of utter betrayal. “It’s ok! Maxine’s not going to do your vaccination!” said her Mum. “She’s just here to see the doctor too.”

I was mad for Judy Blume books as a tween but if Blume had knocked on our front door, I’d not have recognised her. The glorious thing the pre-internet age offered an author was relative anonymity – particularly for an author with such high aesthetic visibility in Australia as me. These days, students watch your interviews. They Google- rabbit-hole you, until your face has been emblazoned on their psyche. So, when they randomly stumble across you in the wild, things can get, well, weird: emotional emails from younger teens, written to the 16-year-old you of the book, rather than the 42-year-old you of today; or adults for whom reading your story has inspired them to seek you out and share theirs.

There was the Year 12 boy, enraged at the behaviour of my childhood bully in the book, who sent a message: “I want to punch Greg Adams in the face, and I wasn’t even there.”

But there are new delights the digital age brings an author too. My latest picture book When We Say Black Lives Matter came out in the UK and US in 2021, having already been released in Australia in 2020. The beautiful thing the online space did for this book, which has such an ambitious purpose, allowed me to see how the book was interacting with people’s lives. There was the London mother, who posted a video of her daughter, perhaps eight or so, giving an impromptu explanation of the book to herself. “It says When We Say Black lives Matter, and we’re marching through the night…” the child says, earnestly. “So they’re marching…with signs that say Black people should be treated the same as white people. Because it’s just different skin colours.”

During US Black History Month, a grade one class in California made a short movie in which each child in the class read several lines from the book. To hear the confident readers speaking so assuredly, and the more hesitant readers slowly sounding out the words, was heart-melting. During a time when I could not travel due to pandemic restrictions, my work could.

Still, I’ll sometimes note to school students that though they may have heard me “reciting my poems on the wireless,” or “put me into Google,” that doesn’t mean they should be “contacting me on the interwebs.” A daggy reminder that I’m significantly their senior: no matter how accessible I am, or how much they know of my teenage years. I explain that, out of time constraints, and in fairness to other students, I most probably won’t be able to respond at all. Except when I get the burning urge to say, well, read it, and weep.

Maxine Beneba Clarke is the award-winning author of more than nine books including short story collection Foreign Soil, the memoir The Hate Race and the poetry collection Carrying the World.

She is a guest of the Sydney Writers’ Festival, whose theme this year is Change My Mind. The event runs from May 16 to 22.

05/04/2022 lifestyle Comments Off on ‘Can you come to my party?’: What it’s like to have your novel studied at schools
Recent Posts