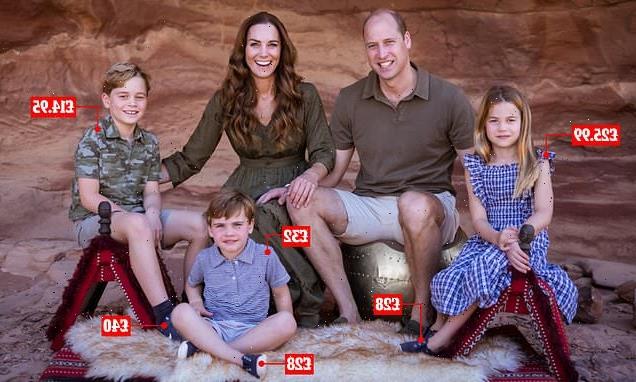 Prince George,  Princess Charlotte and Prince Louis showed they are following in their mother’s footsteps with a love of high street fashion in the family’s Christmas portrait released yesterday.

A family holiday in the desert with Dad in shorts, the youngsters in their summer gear and Mum showing off her sunkissed glow is the theme for this year’s greeting from the Duke and Duchess of Cambridge, who have delighted fans with a family portrait taken on a secret trip to Jordan earlier this year.

Princess Charlotte looked all grown up as she perched on a stool in a £25.99 gingham dress from Mango. She and Prince Louis donned the same shoes, a pair of Trotters trainers costing £28.

Meanwhile Prince George beamed as he posed in a £14.95 camo t-shirt from GAP and grey shorts. 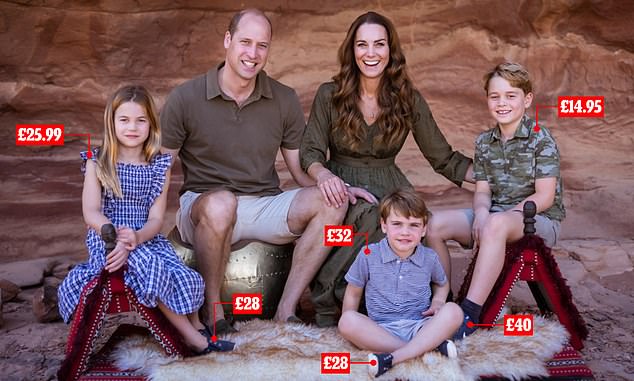 Prince George , Princess Charlotte and Prince Louis showed they are following in their mother’s footsteps with a love of high street fashion in the family’s Christmas portrait released yesterday

Prince Louis sat cross-legged at the front in a stripey £32 polo shirt from Rachel Riley – a bigger version of the top Prince George wore from the brand during an official visit to Taronga Zoo in Sydney when he was nine-months-old, as well as laceless slip-on sneakers by Hampton Canvas, which have been worn by both his older brother and sister.

Princess Charlotte has often snapped in outfits from trendy yet sophisticated stores including Zara and Ralph Lauren, as well as Italian designer Nicoletta Fanna and Spanish brand Fina Ejerique.

She has regularly worn a traditional dress style in playful floral prints and striped patterns during royal outings.

Designer Rachel Riley has previously said Princess Charlotte is destined to follow in the footsteps of her mother Kate Middleton and become ‘a style icon’. 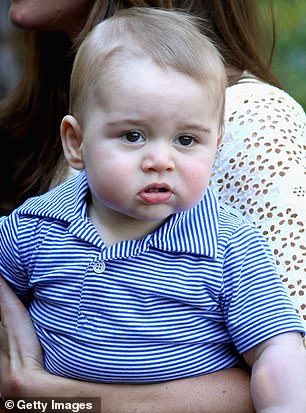 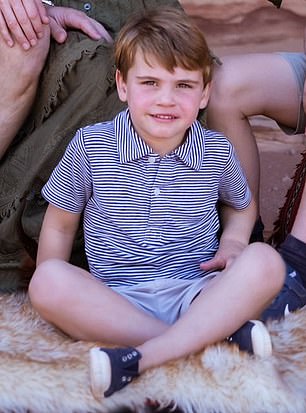 Prince George pictured at Taronga Zoo in Sydney aged nine months in April 2014, wearing his Rachel Riley polo shirt (left). Prince Louis was pictured in a bigger version of the same shirt On holiday in Jordan, and also appeared to be wearing his brother’s hand-me-down blue trainers

The designer, who crafted Charlotte’s birthday portrait dress this year, said Kate  appears to be ‘making bolder fashion choices’ for Princess Charlotte as she matures.

Rachel told Vanity Fair’s Katie Nicholl: ‘We look forward to seeing Princess Charlotte’s style develop as she continues to grow and mature and we have no doubt she will become as much of a style icon as her mother is.’

Meanwhile Prince George has worn shorts in all the official portraits taken to mark milestones such as his birthday or the Queen’s 90th birthday. 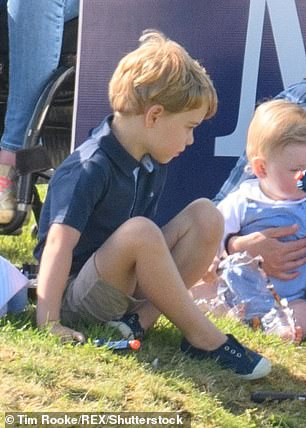 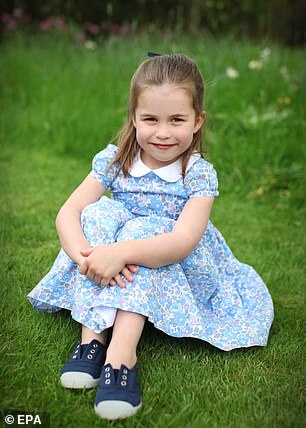 George previously wore the shoes to watch his dad compete in the Maserati Royal Charity Polo Trophy in 2018, pictured left. Right, Charlotte wore the same pair of shoes for her fourth birthday portrait in 2019

He claimed that shorts on young boys are, in fact, a silent British class marker and trousers are deemed ‘suburban’, which no self-respecting royal would want to be considered.

It’s not been revealed exactly when the family travelled to Jordan, but the visit is likely to have taken place in the later part of the year when travel restrictions were relaxed.

During the summer, Jordan was on the amber list, meaning that after 19 July fully vaccinated arrivals into the UK did not have to quarantine, as long as they took a pre-departure test and a PCR test on day two and eight after coming home. On 4th October the pre-departure and day eight tests were scrapped.

No details of the visit would have been announced to the public at the time because it was a private family holiday, rather than an official royal tour.

Jordan holds a special significance for the family because the Duchess of Cambridge spent part of her childhood in the country where her father worked as a flight dispatcher for British Airways, and when William visited the Middle East in 2018 on an official tour, he spoke of their intention to come back with their children in the future.