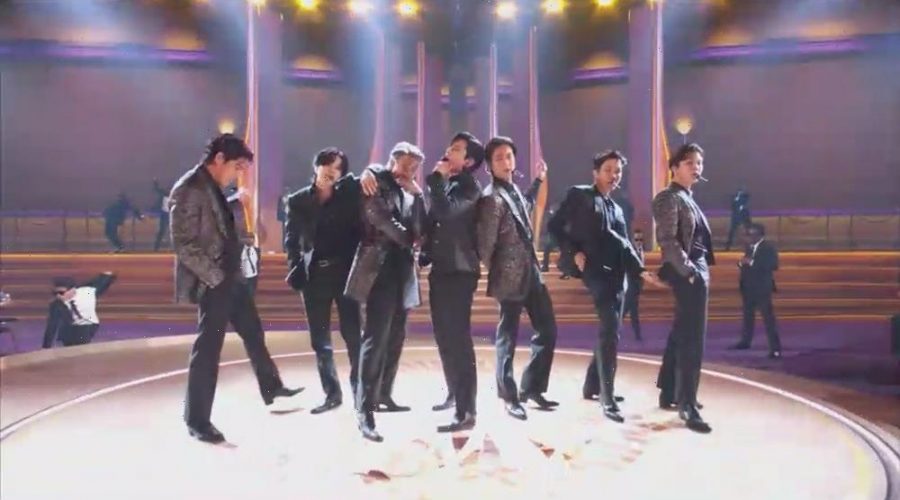 For BTS’ upcoming run of stadium shows in Las Vegas, the septet will be down to… six and a half? Or maybe the math won’t work out exactly that way, but Big Hit has announced to fans that Jin’s participation in the four Allegiant Stadium shows will be scaled back, despite his “strong wish” to “participate in the performance in full.”

The limited expectations being set for his part of the proceedings are due to the same finger injury that kept Jin from being as active as the other six members in the performance by BTS at the Grammys Sunday.

Said the statement from Big Hit on Friday: “As we informed you on March 19, Jin had injured his left index finger as the tendons in the finer had been partially damaged and underwent surgery to repair the extensor in the finger. It was the opinion of the medical personnel that Jin should refrain from vigorous movement as any impact on his finger due to the amount of activities increased more than necessary, while he is still recovering from the injury, may cause another surgery.”

Bit Hit continued, “While the artist himself strongly wished to participate in the performance in full, our company has decided to follow physician advice and minimize Jin’s movements during the ‘BTS Permission to Dance on Stage – Las Vegas’ concerts” on April 8-9 and 15-16. “As a result, Jin’s choreography and stage performance will be limited to a certain extent. We ask for your understanding and support from all our fans.”

Some fans have worried that they saw Jin wincing in pain on the red carpet. But in a statement published on Weverse April 4, he said (translated into English): “No, my finger doesn’t hurt really. It’s wrapped around because it would need another operation/surgery if there’s a large impact/force onto it. So if you pretend it hurts people are cautious/careful.”

At the Grammys, Jin appeared apart from the other members for much of the “Butter” choreography, and was portrayed as sitting at a control board while the others went through a vigorous dance in which they acted out roles as spies, although he joined them for the finale.

04/08/2022 lifestyle Comments Off on BTS Will Have Jin as a Limited Participant in Las Vegas Shows, Due to Lingering Finger Injury
Recent Posts