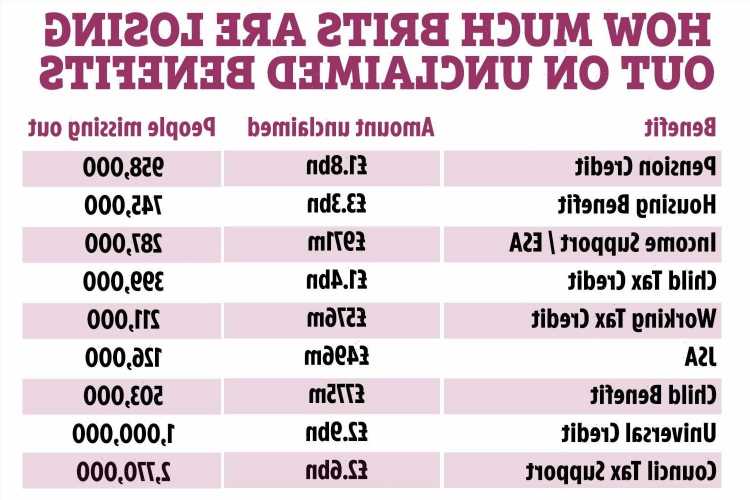 AT least 7million people in the UK are missing out on over £15billion in unclaimed benefits, new research shows.

Charity Turn2us has said millions of families are at risk of being pushed further into financial hardship because they haven’t claimed for help they are entitled to. 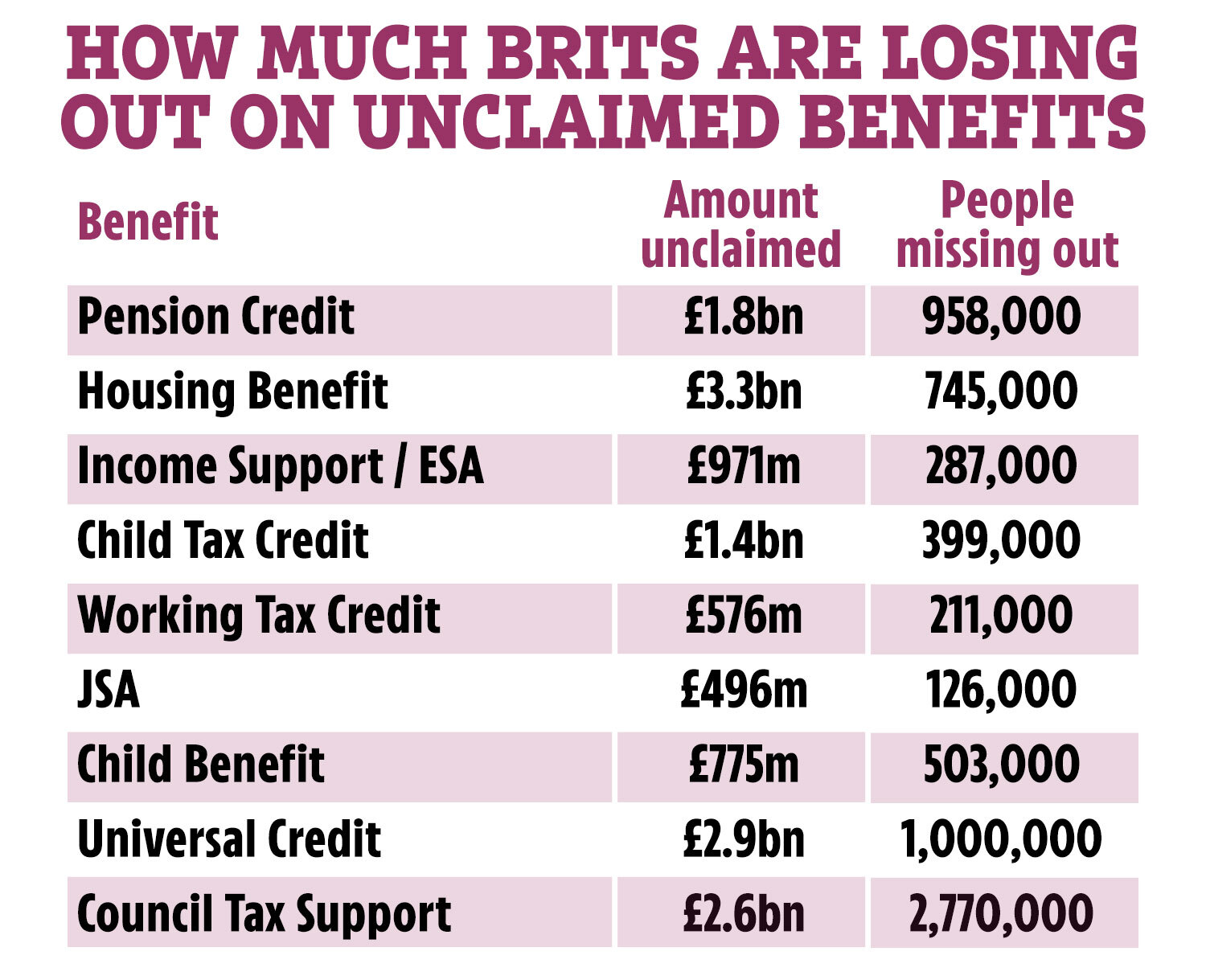 Although it varies depending on what benefit you’re applying for and your circumstances, the average amount people claim per year is £5,320 according to the anti-poverty charity.

It revealed that the benefit most people are losing out on is council tax support, with roughly 2.8million people missing out on £2.6billion.

While the largest amount of money left unclaimed was for housing benefit, with three quarters of a million adults failing to claim a huge £3.3billion.

And one million families are leaving £2.9billion in the Universal Credit money pot untouched, while around 958,000 are missing out on £1.8billion in pension credit claims.

Turn2us also reported that in a survey of 2,000 adults, almost half (45%) had never checked whether they are eligible for benefits, which rose to 63% for retirees.

How do I apply for Universal Credit?

HERE’S all you need to know about applying for Universal Credit.

You'll need to apply to the new welfare system via the gov.uk website, starting by setting up an online account.

To make an account, you'll need an email address and a phone number.

After that, you'll need to answer a set of questions about your current circumstances, known as your "to do list".

These include things like when you last received payment for a job, what your household income is and how many people depend on you financially.

If you've lost your job, Citizens Advice recommends that you don't apply until you've received your final wages or any final holiday pay.

This is because any money you receive after you've applied for Universal Credit will count as income and mean that you're entitled to less in your first payment.

You will then need to confirm your identity online.

In certain circumstances, you'll be able to apply over the phone, such as those who don't have regular access to the internet, are visually impaired, or have a physical condition that stops you from using a computer or smartphone.

To do this, you will need to contact the Universal Credit helpline to ask if you can apply by phone or arrange a home visit.

In this case, someone can call them on your behalf if you can't do it yourself.

Stigma, feelings of shame and “negative media representations” of those claiming benefits were cited as some of the most common factors putting people off applying for help.

To tackle the issue, Turn2us has launched a new online benefits calculator that can help you check whether you’re eligible for benefits, and which ones.

It takes 10 minutes to use the calculator, and helps you kick start the application process as well.

You can try out the benefits calculator below.

How do I backdate benefits?

It is possible to get some benefits backdated if you found out you’ve missed out on claiming for them.

But it depends on which benefit you’re making a claim for, as different benefits have different rules for back payment.

For example, new claims for Universal Credit, income support and housing benefit can be backdated for a maximum of one month.

You can get child benefit, pension credit backdated for up to three months.

But in most cases, you’ll have to provide evidence to show a good reason why you were not able to make a claim earlier.

This could be because:

You can apply to backdate your benefit payments when applying for the benefit.

How to do this will vary depending on which benefit you’re claiming for, so it’s worth checking in for more information from the government before putting in your application.

Turn2us also recommends requesting your benefits to be backdated in writing to the Department for Work and Pensions, HMRC or your local council.

It comes as millions of families' finances across the country have taken a hit due to the Covid crisis.

StepChange warned about a "personal debt tsunami" worth £6billion due to the pandemic hitting 4.6million households in June last year.

Millions of Brits in loans and credit card debt can now get a two-month "breathing space" break to get financial help.

Also, here's how to get help with mortgage costs as 700,000 struggle with repayments.