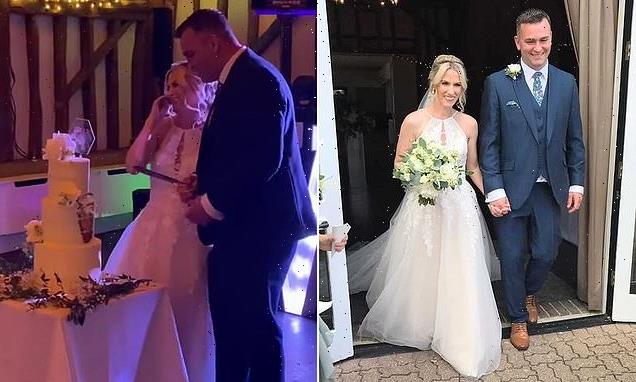 A bride was filmed jokingly telling off her new husband not long after they exchanged vows because he was slicing their wedding cake ‘like a kebab’.

Civil servant Becca Thorne, 38, playfully critiqued husband Darren Thorne, 40, after he cut a chunk out of their three-tier cake.

The couple, from Wokingham, Berkshire, tied the knot on June 11 after 12 years together.

She said: ‘I just gave him the knife thinking he might have been better at it than me but he obviously wasn’t. 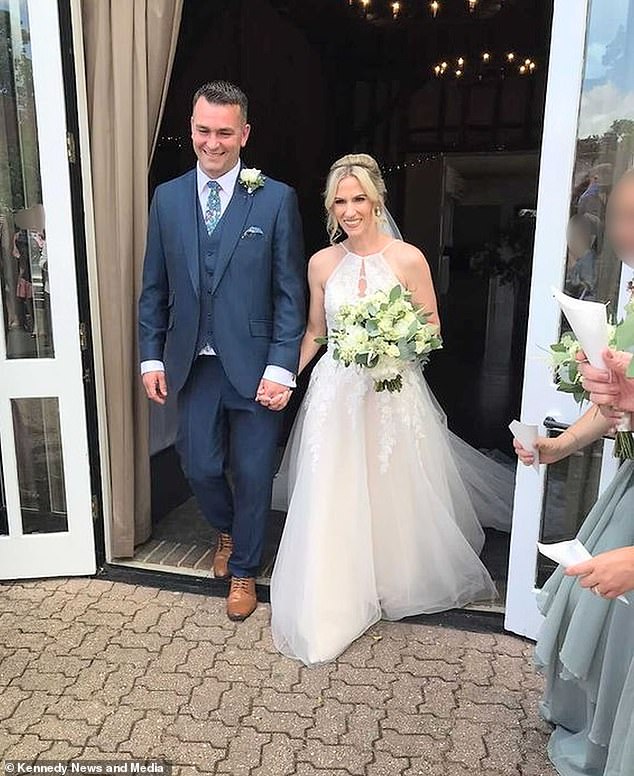 Civil servant Becca Thorne, 38, playfully critiqued husband Darren Thorne, 40, after he cut a chunk out of their three-tier cake at their wedding on June 11, pictured 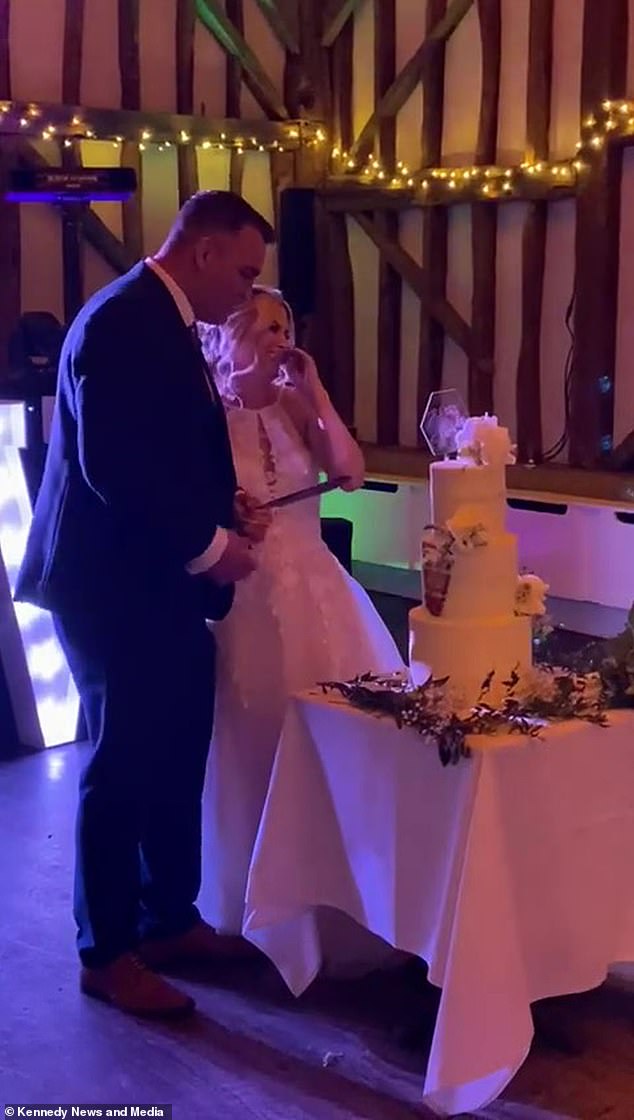 Groom Darren says he was ‘laid into’ for slicing the cake ‘like a kebab’ but Becca is laughing in the clip, which viewers have called ‘iconic’ and ‘hilarious’ 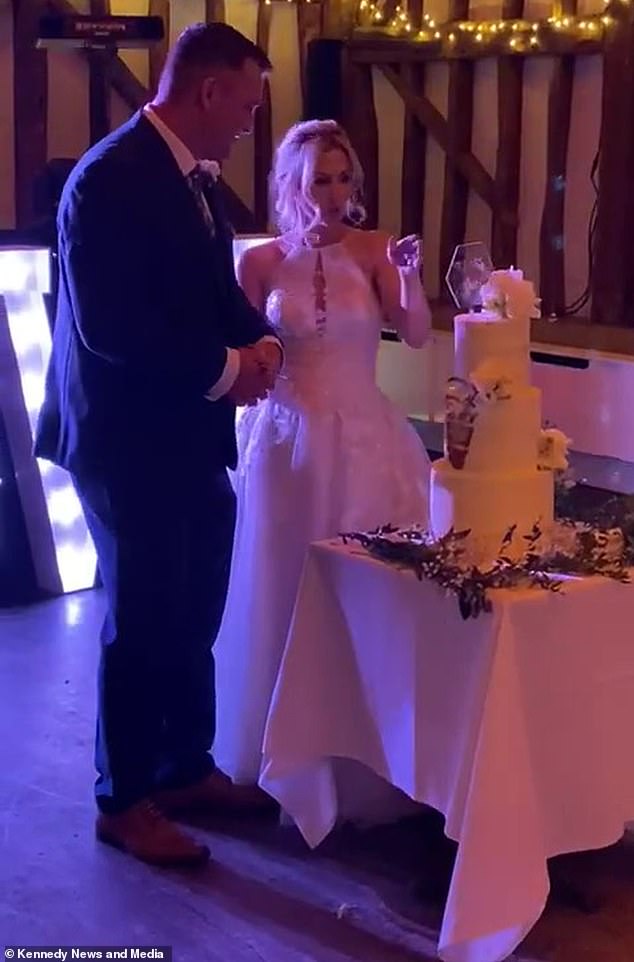 The pair discuss the cake cutting angle, as a hunk of sponge has already been chopped from the second layer by Darren

‘I haven’t seen him cut a cake before but we were in front of everyone so I thought I’d give it to him.  It was an expensive cake and I didn’t want to ruin it.

‘When he started shaving off the icing, I thought “what are you doing?” Why had he gone for that layer and why was it so far to the right?

‘I could see as soon as he started cutting that he was basically shaving the side of the cake with the knife.

‘Darren had quite a few drinks, I think that helped. He sliced the cake like a kebab. He loves kebabs.

‘He said “I think that turned out alright” and I said, “No, it hasn’t. You’re meant to eat it afterwards and I was looking at this slither of cake.”‘

The couple, who had been engaged for around three years, celebrated their big day with their two children Thea, four, and Grayson, two. 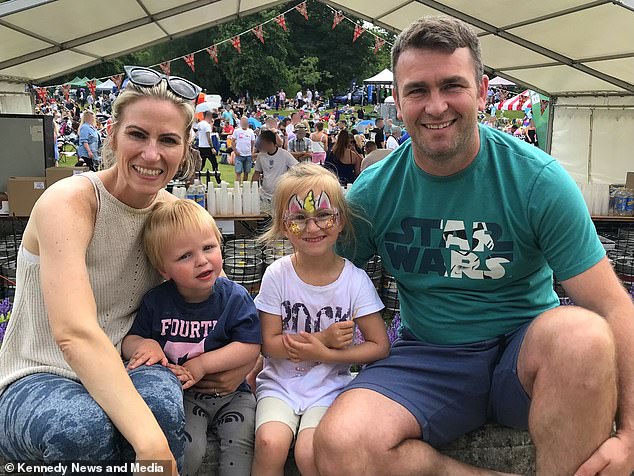 Becca and Darren have been together for 12 years and share two children; Grayson, two and Thea, four, pictured 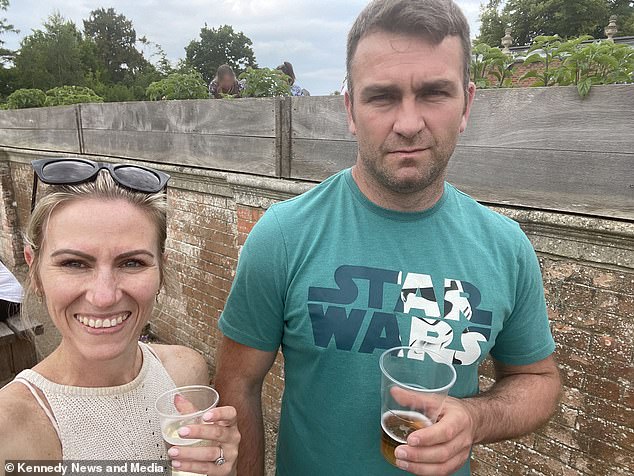 Becca and Darren enjoy a drink out and about. The couple, who’ve been together for over a decade, got married in June and their special cake cutting memory has been a hit on social media

Determined to pick a cake the children would like too, they went for a delicious mix of flavors and splurged on the pricey treat.

Becca said: ‘I think the cake cost about £450. It was quite expensive. It was fine afterwards – the kitchen rescued it. They kept the top layer anyway.

‘We spent a long time trying to find the cake. I was quite picky about what layers I wanted it to have.

‘I envisioned something that was a bit more like what we and the kids would like instead of the traditional type of sponge. 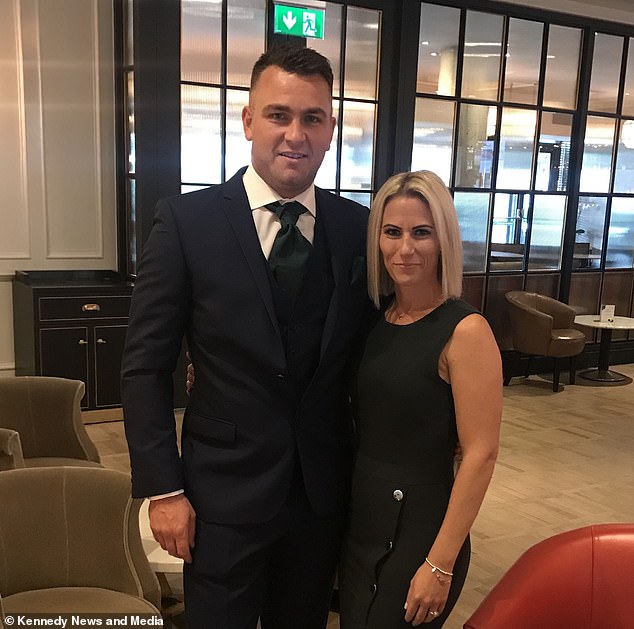 Darren and Becca pose for a photo at an event. Despite being together 12 years Becca admitted she had ‘never seen her husband cut a cake before’ and got a bit of a shock when she did!

‘I chose cookies and cream for one layer, a salted caramel layer and vanilla sponge with buttercream.’

Darren claimed he was suffering from ‘stage fright’ at being the centre of attention and was so busy smiling for pictures that he didn’t notice his ‘poor’ cake cutting skills.

Darren said: ‘I was more concerned with everybody staring at me and smiling for pictures than what I was actually doing.

‘Having eaten cake before I was fairly confident I had the technique down.

‘I didn’t realise people were laughing until my new wife laid into me for doing such a poor job of cutting a slice.

‘The cake tasted great – I’m just not a fan of icing so wanted to shave it off.’

Bride Becca posted the ‘hilarious’ video on social media, with her clip attracting more than 94,000 views and over 6,000 likes and comments.

Becca is thrilled she captured the ‘hilarious’ moment and said it had guests ‘laughing’.

On social media, commenters joked Darren’s faux-pas called for an ‘immediate divorce’ – while others said he looked like he was expecting to eat it with ‘a side of cheesy chips’.

One user said: ‘I have honestly just laughed so much at this.’

Another wrote: ‘Just garlic sauce on mine please boss – and a portion of cheesy chips’.

Another woman said: ‘Omg this is amazing. This is something my partner would do haha.’