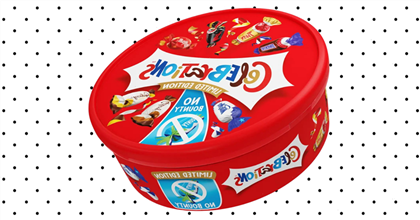 You read that right: Mars Wrigley is really trialling “no Bounty” Celebrations boxes this Christmas.

As much as we love a good Christmas pudding or mince pie, nothing screams Christmas quite like a good old chocolate selection box. There’s something especially festive about rifling through the multi-coloured wrappings to pick out your favourite and going on to consume way too many in one sitting.

But this year, the chocolate selection box landscape has been struck by an unexpected change. This morning, Mars Wrigley – the company behind the classic Celebrations box – announced it will be trialling Bounty-free tubs after a survey revealed 39% of consumers were in support of the change.

If you need a moment to let that sink in, we understand. While not all of the Celebrations boxes on sale this year will be Bounty-free – the “No Bounty” tubs will be on sale at 40 selected Tesco Christmas Market sites until 18 December – it’s safe to say this decision has split opinion online. In fact, many Bounty lovers have expressed anger at the removal of the oft-forgotten sweet.

However, despite the outpouring of love for the Bounty on social media, it seems lots of people are in support of the bar’s removal – with Mars Wrigley’s survey of 2,000 Britons aged 18-65 revealing that 18% would be irritated to find just Bounty bars left in the tub, and 58% believe that that kind of situation could lead to a family argument.

On the flipside, however, 18% did name Bounty as their favourite chocolate in the tub over other options such as Mars, Galaxy and Milky Way – proving that not everyone is quite so opposed to the humble coconutty treat.

But just because some of us may be denied the chance to enjoy a Bounty this Christmas, it doesn’t mean the chocolate will be gone for good.

Emily Owen, Mars Wrigley’s head of Celebrations festive cheer said: “Christmas is the time for giving – but it seems this year, the British public are keen for us to take away… Bounty. Last year, we gave customers the opportunity to return their unwanted Bounty chocolates.

“Now, off the back of public demand, we’re trialling taking them out of the tub altogether. You don’t know what you’ve got until it’s gone! And to those loyal (and secret) Bounty lovers out there, there’s still a chance they’ll make a return after the trial.”

If one thing’s for sure, it’s time for Bounty lovers to speak up in support of their favourite treat – before it’s too late.

11/03/2022 lifestyle Comments Off on Bounty bars are being removed from Celebrations tubs this Christmas, and we’re not sure how to feel
Recent Posts