Disguising a relationship drama as a spy thriller is a long tradition – and a logical one, since there can be few couples who have absolutely no secrets from each other. But as in other genres from the superhero story to the biopic, the personal story doesn’t always blend smoothly with the big picture.

Janus Metz Pedersen’s All the Old Knives is never less than watchable, but there’s a hint of absurdity in its willed gravitas, starting right from the outset when CIA agent Henry Pelham (Chris Pine) meets his boss Vick (Laurence Fishburne) in a Vienna office lit like the mansion in The Godfather. 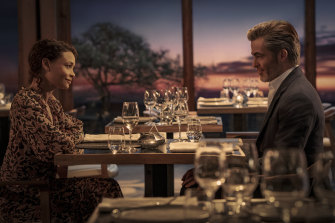 Thandiwe Newton and Chris Pine in All the Old Knives. Credit:Amazon Prime

Seated in their leather-backed chairs and equipped with tumblers of presumably expensive Scotch, the pair talk through some unfinished business from eight years earlier, when a passenger plane was hijacked by Islamic extremists and their team failed to prevent the worst possible outcome.

Vick suspects a mole, the most likely candidate being Henry’s former lover Celia (Thandiwe Newton), now living quietly with her husband and child on the California coast (specifically Carmel – the town where Clint Eastwood was once mayor, though this doesn’t come up).

Henry’s mission, which he has little choice about accepting, is to look up his old flame, winkle the truth out of her over dinner and drinks, and then dispose of her discreetly if necessary.

I’m no expert in international espionage, but nothing about this scenario strikes me as especially probable. On the other hand, once Celia and Henry are reunited in a wine bar, the whole question of probability feels beside the point.

Newton is perfect to play a woman of mystery, though not because she gives nothing away. If anything, there’s too much information: her face can hint at passion, curiosity, amusement, suspicion, sorrow and defensiveness all within a few seconds.

The real mystery is how Henry can stay focused on the task of interrogation. But the acting contest isn’t entirely one-sided: Pine’s strength is that he fits the conventional leading man mould almost too well, leaving us room to wonder what’s going on behind the handsome, gruff, all-American facade.

Gradually the answers are filled in, as Pedersen cuts between Henry and Celia catching up over their multiple-course meal and the events that originally drove them apart.

Romance and geopolitics are intertwined in both timeframes, though we’re left in no doubt about which takes precedence. There’s even a little sex – nothing too extensive or explicit, but enough to indicate that the filmmakers had their sights set all along on the streaming market rather than the big screen.

Gradually the film darkens both visually and dramatically, as we know it must. But the shifts in tone are more jarring than effective. In particular, there’s something faintly distasteful about the bid to authenticate the plot by reminding us of terrorist incidents in the real world.

Equally, though, there’s something undeniable about the proposition that any excuse will do to show a couple of movie stars gazing tragically and tenderly into each other’s eyes.