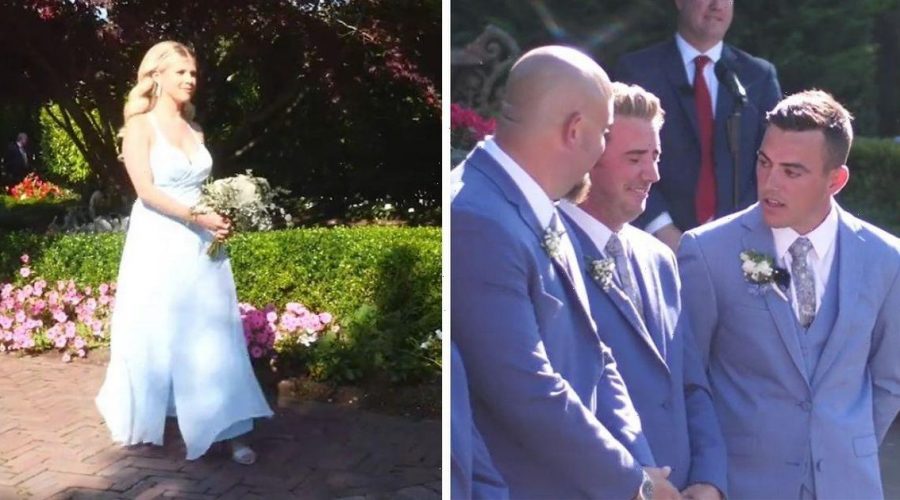 A 'best man' was branded an "a**ehole" after his comment about a busty bridesmaid was picked up by the groom's microphone.

It took a moment for the smiling groom to decide to chastise his friend for not realising that he was wearing a microphone, and everything said was being recorded.

The faux pas has since been viewed more than 11million times on TikTok after it was shared online by wedding videographer @ChiolaFilms.

The clip starts with an attractive bridesmaid, carrying a bouquet of flowers, while loud piano music plays.

As she is in shot, there is little laughter, and one man can be heard saying "oh yeah".

The camera then cuts to the groom, best man and ushers smirking, at which point the best man says "zoom in on those".

The smiling groom starts by shushing his friend before turning and saying: "They can hear you."

"Is it loud?" responds the best man.

To stay up to date with all the latest news, make sure you sign up to one of our newsletters here .

The best man tries to blame the volume of the music for not being able to hear as the groom continues to lay into him.

The best man struggles to control his laughter, before being called an "idiot" one last time. The clip has generated more than 7,000 comments as viewers all weighed in on the best man's remarks.

Another said: "As a wedding videographer who mics people all the time… I can tell you, we hear a LOT"

"LMAOO this is hilarious! The way the other guy looked at him, he must’ve been loud," said a third.

Others weren't buying the groom's chastising of his friend and thought maybe it was just for show.

One said: "The guy with the mic was about to get in on it too but then he realized he was mic'd up."

Another observed: "If that wasn’t hallmark-grade acting from the groom idk what is."

While a third said: "groom was initially ok with the comment. until he too realized the mic was on he had to get upset so his bride wouldn’t be upset when she sees video."

All the news, entertainment, sport and fun stuff you love about the Daily Star, brought to you by our American team.