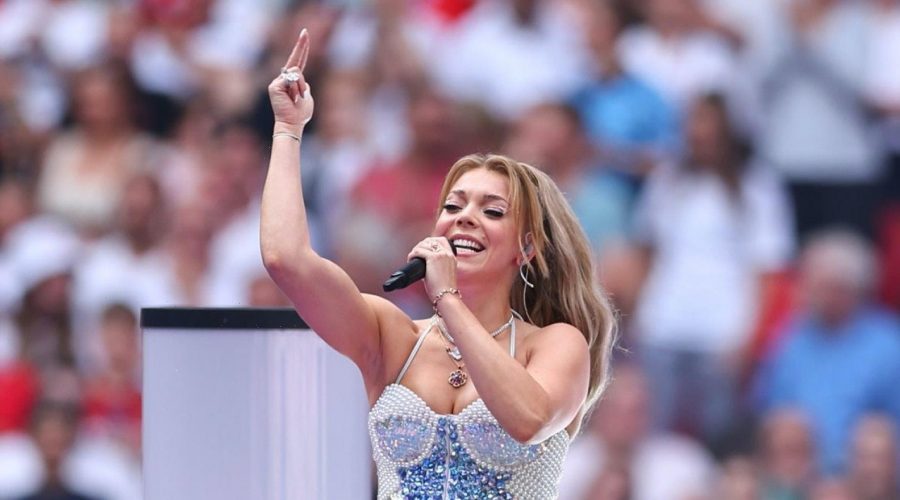 On a historic night that should have been about what women can do – not what they look like – singer Becky Hill was the victim of body shaming trolls.

Ahead of England’s historic 2-1 victory over Germany to win the Euros 2022 on Sunday night, the 89,000-strong crowd at Wembley was treated to a live performance by singer Becky Hill.

The Lionesses’ breathtaking performance was watched by a peak television audience of over 17.4 million, making it the most-watched programme in the UK so far in 2022.

Hill also received positive comments online, with some praising her for championing female empowerment as she sang alongside Stefflon Don and Ultra Naté.

However, on a day that was supposed to be about what women’s bodies can do and not what they look like, Hill quickly became the victim of sexualised online trolling for her outfit – a bejewelled leotard and tights.

While a handful of comments, which have since been deleted, shamed her for showing too much skin, Hill’s response was a masterclass in confidence.

“Show off your curves! Cover up for no-one and be confident,” she posted.

Responding to one tweet telling her “you don’t always have to dress up,” Hill replied that “women are always expected to dress up”. “What was I supposed to do? Go on in my trackies?”

“I’m also sorry you think that what I was wearing devalued my talent and wanted me to be more covered up to be a role model for body confidence to young women. As you can read, that is an oxymoron,” she tweeted later.

Hill described her final show performance as “one of the biggest moments of my career,” adding that she will “remember that moment until the day I die”.

“It was an absolute honour to open up such an iconic and historic moment for women’s football, and perform in all my popstar glory.”