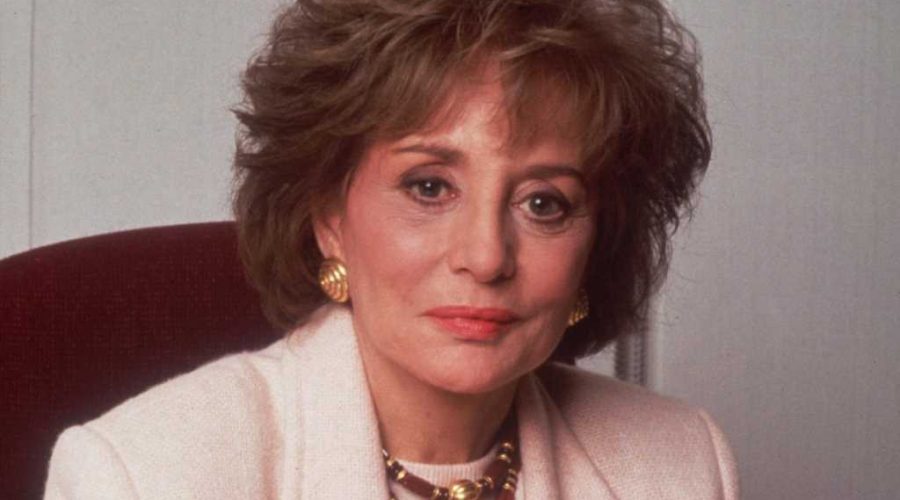 "Without Barbara Walters there wouldn’t have been me," shared Oprah — while Rosie O'Donnell, Meghan McCain and more share tributes.

The journalism world and Hollywood celebrities alike are paying tribute to the late, great Barbara Walters, who died on Friday at the age of 93.

Per TMZ, she died at home, surrounded by her loved ones, following “several years” of “declining health.”

Walters is an absolute news legend, with the words “pioneer” and “trailblazer” mentioned in nearly every tribute posted after her passing. After starting her career at TODAY on NBC, she became the first female anchor in evening news when she joined ABC in 1986, before going on to cohost “20/20” and eventually create “The View.” Throughout her illustrious career, she won 12 Emmy Awards.

She made her final appearance on “The View” back in 2014; her last on-air interview was with Donald Trump for ABC News in 2015.

“Barbara was a true legend, a pioneer not just for women in journalism but for journalism itself,” Bob Iger, the CEO of The Walt Disney Company, shared in a statement on Friday night. “She was a one-of-a-kind reporter who landed many of the most important interviews of our time, from heads of state to the biggest celebrities and sports icons. I had the pleasure of calling Barbara a colleague for more than three decades, but more importantly, I was able to call her a dear friend. She will be missed by all of us at The Walt Disney Company, and we send our deepest condolences to her daughter, Jacqueline.”

Many of Walters’ colleagues in news were quick to praise her for breaking barriers in the industry.

“Without Barbara Walters there wouldn’t have been me — nor any other woman you see on evening, morning, and daily news,” wrote Oprah Winfrey. “She was indeed a Trailblazer. I did my very first television audition with her in mind the whole time. Grateful that she was such a powerful and gracious role model. Grateful to have known her. Grateful to have followed in her Light.”

“The world of journalism has lost a pillar of professionalism, courage, and integrity. Barbara Walters was a trailblazer and a true pro,” shared Dan Rather. “She outworked, out-thought, and out-hustled her competitors. She left the world the better for it. She will be deeply missed. RIP”

Wrote Joan Lunden: “We have lost a true legend with the passing of Barbara Walters.  Such a trail blazer. Such a generous woman – I learned so much from working with her.”

“So often we toss around the words – icon, legend, trailblazer – but Barbara Walters was all of these – and perhaps above all else, Barbara Walters was brave,” wrote David Muir. “She paved the way for so many – we learned from her – and remain in awe of her to this day. RIP, Barbara.”

“Truly saddened to hear of the passing of Barbara Walters tonight…she shattered glass ceilings and blazed a trail for so many women in television news who would follow her…like me,” wrote Elizabeth Vargas. “I will never forget her.”

“Barbara Walters was a true trailblazer,” said Robin Roberts. “Forever grateful for her stellar example and for her friendship. Sending condolences to her daughter and family.”

“Tough lady in a time where you had to be one and one of the all time great interviewers. Legend,” added Kara Swisher.

Geraldo Rivera called Walters “the greatest reporter, host, interviewer ever, kind & considerate to this brash upstart.” He added, “Describing her will take books. Determined, connected, courageous, tough, compassionate, she’ll be on the Mount Rushmore of journalists.”

“Barbara Walters never flinched when questioning the world’s most powerful people,” wrote Kareem Abdul-Jabbar. “She held them accountable. She cared about the truth and she made us care too. Fortunately, she inspired many other journalists to be just as unrelenting. We are all better off because of her.”

Some of Walters’ colleagues at “The View” also shared their tributes to social media.

“I owe Barbara Walters more than I could ever repay,” wrote Star Jones, one of the show’s very first hosts. “Rest well sister…mother…friend…colleague…mentor.”

Added fellow-OG Debbie Matenopoulos on Instagram: “So so so sad … No words right now. You single handedly changed my life and the life of every other female journalist by leading the way for us all. May you rest in peace and in power and beauty you amazing woman!”

“Barbara Walters will always be known as a trail blazer. Her hard hitting questions & welcoming demeanor made her a household name and leader in American journalism,” added Meghan McCain. “Her creation of The View is something I will always be appreciative of. Rest in peace you will forever be an icon.”

Shared one-time cohost Jenny McCarthy: “My Dear Barbara, Thank you for your love, guidance, support, nurturing and for making a seat for me at ‘the table.’ Your impact on the world is immeasurable. Your impact on me will never be forgotten. You will forever be an icon, in every sense of the word, and a most beloved friend to me. Love you always, Jenny. Rest peacefully. 🙏🏻💔🕊️”

Rosie O’Donnell simply shared a photo of the two and added, “legend.”

Many of Walters’ celebrity fans — and sometime-interview subjects — also shared their own tributes to the reporting legend. Among them was Monica Lewnisky, who was famously interviewed by Walters back in 1999.

“a short thread on barbara walters’ passing:  i knew barbara for over half of my life. we met in the spring of 1998, in the midst of the starr investigation; i was 24. i remarked that this was the first time i’d ever been in serious trouble. i’d basically been a good kid. got good grades, didn’t do drugs, never shoplifted etc. without missing a beat barbara said: monica, next time shoplift,” wrote Lewinsky.

“we stayed in touch over the past 25 years. the last time we saw each other was for lunch a few years ago. of course, she was charming, witty and some of her questions were still her signature interview style,” she continued. “she was the very first person with whom i ever sat for a television interview… and will certainly be my most memorable. barbara will be missed by many — including me. sending love to jackie, george + her other friends.”

Wrote Viola Davis: “What can I say about the life, the legend and icon Barbara Walters. I watched you my entire life give the most bold, honest, informative, brave interviews. You redefined what it meant to be a ‘newsperson’. You redefined womanhood. It was an honor to have shared space with you. Rest well Queen! You have earned your crown 👑❤️🙏🏿🕊”

“A true trailblazer, she was the 1st woman anchor on the evening news. And I was privileged to know her,” wrote Billie Jean King. “When she interviewed me, it was clear she did her homework. She was always prepared. May she rest in power.”

Mark Hamill called her “One of the best ever,” while Yvette Nicole Brown said she “was honored to sit at the table with THE #BarbaraWalters on @TheView a couple of times. I still pinch myself.  I learned a lot from her. ❤️ May she #RIP.”

“Remarkable. Fearless. Assured and laser focused in her interviews, she broke through every barrier, paving the way for every woman journalist who followed,” tweeted Marlee Matlin. “What an honor it was to be interviewed by her on @TheView”

Added Lynda Carter: “Barbara Walters was an American institution. As the first female national news anchor, she opened the door to endless possibilities for so many girls who wanted to work in TV, myself included. Her impact cannot be overstated. I’ll miss you, Barbara. Thank you for everything.”

“Rest In Peace, Barbara Walters. Thanks for helping me find my voice,” wrote Alyssa Milano.

“#BarbaraWalters was a trailblazer,” tweeted Maria Shriver. “She was a mentor to me as well as a friend. So many women broke into the news business because she did her job well. She worked so hard & helped a lot of younger women such as myself. Thank you, Barbara, for everything. You paved the way for all of us. You truly did.”

“Up for anything. Came to every play I was in. Even the bad ones,” joked Jerry O’Connell. “Total trailblazer. Love you Miss Walters!”

“Deb & I are so sad that Barbara Walters passed away. She was a trail blazer, wickedly funny, generous, open hearted and a good friend,” shared Hugh Jackman. “She also gave some of the most memorable dinner parties we’ve ever been to. Get ready heaven, Barbara’s coming to spice things up.”

“I didn’t want to become a daytime talk show host until I saw the view. I knew it was possible because I seen a group of opinionated smart women who had a voice and a platform,” shared “The Real” cohost Tamar Braxton. “This one hurts. Thank you Ms Barbara.”