“They basically broke into my house, and they dumped ice water on me while I was passed out in my bed.”

AJ McLean has revealed his Backstreet Boys bandmates broke into his house to stage a cocaine intervention.

The singer opened up about his addiction battle on GMA on Monday morning, sharing more details after his shocking drugs admission to People Magazine over the weekend.

“When the boys kind of caught on, I missed out on rehearsal,” McLean said. “They basically broke into my house, and they dumped ice water on me while I was passed out in my bed.” 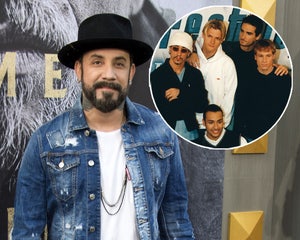 “Everybody started to catch on,” he added. “I wasn’t me anymore, you know, I was just living a lie.”

On Friday, AJ told the publication about the first time he tried cocaine, an hour before filming the music video for “The Call” in the early aughts.

“When I showed up on set and I got in the makeup chair, I told everybody,” he recalls. “I was like, ‘I’m freaking out. I’m on this. I’m on that.’ They were like, ‘You need to stop. Don’t tell the world that you’re on drugs right now.'”

He said he managed to keep it a secret from family and friends for about 18 months, until his bandmates staged the intervention on July 8, 2001.

“The most crucial part of that conversation was the final thing Kevin [Richardson] said to me: If I continued using, he said, ‘I will never trust you again. You’re dead to me.'”

But AJ admitted he continued to fall on and off the wagon for the next 18 years — until one jarring encounter with his family last December snapped him out of it.

“I was never sober. Not for a second,” he told GMA. “And the turning point for me was when I came back home, my wife could smell it on my breath and my youngest of my two daughters would not sit with me.”

Since that day, the “DWTS” alum — who shares daughters Ava, 6, and Lyric, 3, with wife Rochelle — said he has been completely clean and sober.

“There’s too much to live for today — my beautiful children, my amazing wife, my career, my brothers,” he said. “I’ve never felt more grounded than I do today.”

10/19/2020 lifestyle Comments Off on Backstreet Boys Broke Into AJ McLean's House for Cocaine Intervention
Recent Posts
We and our partners use cookies on this site to improve our service, perform analytics, personalize advertising, measure advertising performance, and remember website preferences.Ok