A side-portion of mud, sir? Australian restaurant is ridiculed on Instagram for serving up meals on GRASS-covered tables – with diners asking: ‘how is that hygienic?’

An Australian restaurant has been ridiculed on social media after topping its tables with layers of fresh turf.

A branch of Grill’d in Melbourne has covered its tables with grass, with diners’ food and drinks placed upon it.

However, the gimmick, thought to be short-lived one, has been slated by social media users, with many questioning the hygiene of eating on a layer of earth.

Others cried that they just wanted to eat their food on a table, nothing more, nothing less and others questioned how you might balance a soda on such an uneven surface. 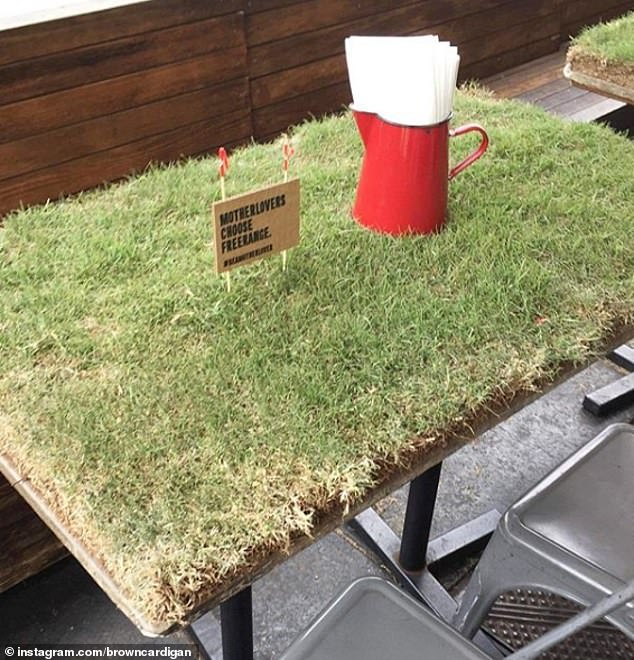 Turf war! Instagram user Browncardigan posted this photo of the Grill’d burger restaurant in Melbourne with grass-topped tables, saying the apparent marketing stunt had ‘triggered’ their anger. After publishing a lengthy rant, some 11,000 people have now liked it

After snaps of the tables surfaced on Reddit and Instagram, social media users got to work criticising the restaurant’s unique idea.

Leading the charge was Instagram user @browncardigan, who said the sight of the grass-topped tables had ‘triggered’ their anger.

They wrote: ‘Melbourne. What the f*** is wrong with you? We get it. You are the brains-trust capital of Australia for self-gratifying, capitalist ethics.

‘But what the f*** does turf on tables somehow prove? How is that hygienic?’

The restaurant chain, clearly following the furore piped up on several occasions, even asking diners in the local area if they would come and ‘mow’ said covering in exchange for a free burger.

Elsewhere, others made quips about ‘pop-up sprinklers’ and sending their pets around to use the tables as a toilet.

Grill’d’s website says the company is ‘always pushing to do better by the environment, and respecting Mother Earth is in our DNA’. 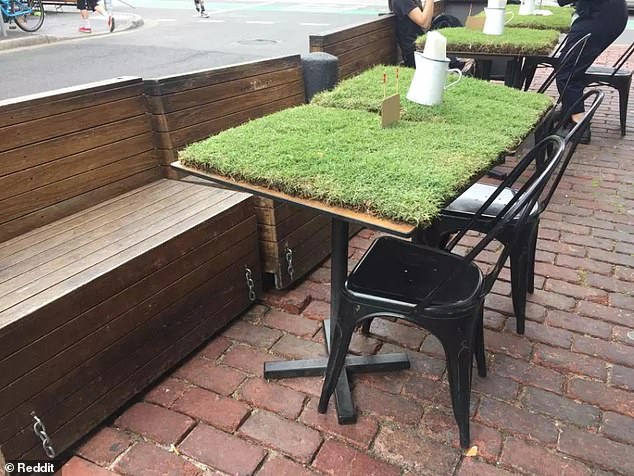 This image appeared on Reddit after eagle-eyed residents in Melbourne spotted the table adornments at Grill’d; many questioned exactly how you would balance a drink on the turfed top

However, one user slammed the company for the impact the gimmick had on the environment: DarcyBrown89 wrote: ‘Trying to look environmentally conscious by killing grass.’

It seems that the turf idea was a short-lived one and backfired in lots of ways. One nearby resident wrote: ‘Joke was on them – it p***** down rain the day they did this and I imagine the mess these made caused instant regret.’

The Twitter account @wewantplates is dedicated to sharing the funniest images taken by diners of unorthodox ways that their food has been dished up, with novel-minded chefs using mini shopping trolleys to serve chips, slates to serve steaks and shoes to carry drinks.

The account’s bio describes itself as ‘The global crusade against serving food on bits of wood and roof slates, chips in mugs and jam-jar drinks.’