Labor is defending its plan to subsidise childcare fees for families earning more than half a million dollars, saying it is not welfare but a way to get more women into more work.

The sector's workers and operators have broadly welcomed the plan but say it does nothing to address ongoing shortages of educators, exacerbated by low wages. 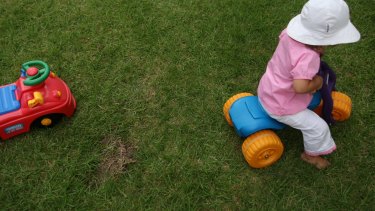 Labor has promised to a universal childcare subsidy as part of a plan to boost women’s employment.Credit:Peter Braig

Under Opposition leader Anthony Albanese’s $6.2 billion plan, parents who earn the least would have 90 per cent of their childcare fees covered – up from 85 per cent now. Labor would also scrap the annual $10,560 subsidy cap that now applies to households earning more than $190,000, and offer help with fees to families earning up to $530,000.

Prime Minister Scott Morrison said this last change would mean the nation's richest parents were big beneficiaries, saying under the Coalition "all the money was spent" on low- and middle-income families.

"There are many unanswered questions about what the Leader of the Opposition said the other night. You know, for the most part, we'll file it under 'fiction'," he said.

Labor's plan has an even taper rate down to zero, meaning the more a family earns the less subsidy parents receive. However, the party wants to eventually subsidise 90 per cent of everyone's fees.

"We make no apologies for the fact that this is not a welfare measure," Mr Albanese said on Friday, using similar language to Mr Morrison when, as social services minister, he redesigned the childcare payments system.

"If you're a police officer married to a teacher, then you're losing money and you're discouraged from working full-time."

The party also intends to keep the activity test in place, meaning people will only have fees subsidised if they are working or studying.

"As a result of demand going up, there will obviously be more jobs for educators," she said.

Wages were the largest proportion of a centre's costs and fee increases over recent years had largely been driven by requirements for more staff with higher qualifications, he said.

"That's a given – you increase your major expense by mandating more staff, there is going to be a cost to families associated with that," he said.

The United Workers Union, which covers childcare staff, says the sector's problems aren't fixed "by making small changes around the edges" and could not be achieved without addressing wages.

"Our members are holding together a system that is broken, by working on low wages, by taking work home with them, by experiencing huge amounts of stress and job insecurity, and that's only been made worse by COVID," deputy director of the union's early childhood section Sarah Gardner said.

Labor took a policy to increase educator pay to the 2019 election but it was not part of Thursday night's budget reply speech.

10/09/2020 lifestyle Comments Off on Anthony Albanese defends childcare plan, says subsidies for wealthy families are not welfare
Recent Posts
We and our partners use cookies on this site to improve our service, perform analytics, personalize advertising, measure advertising performance, and remember website preferences.Ok