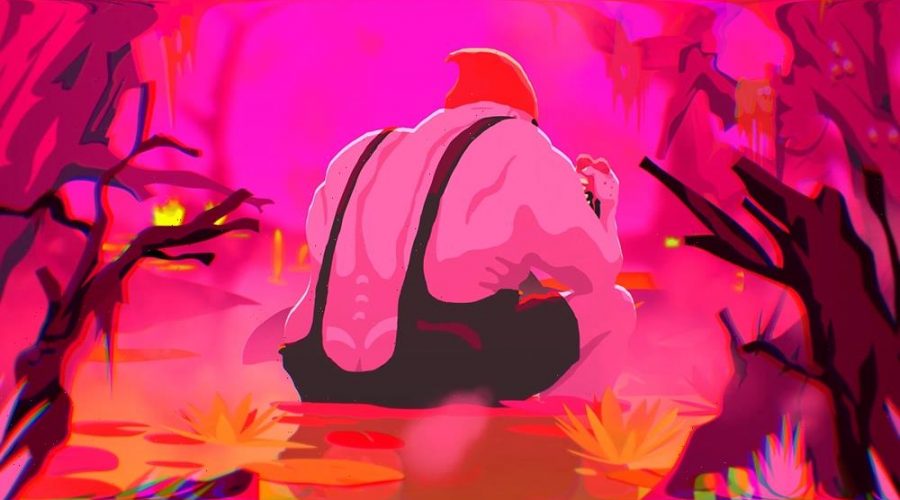 Annecy’s official short film competition is one of the festival’s centerpieces. Many years, at least one ends up snagging an Oscar nomination. Every year, Variety watches the shorts in Annecy’s main competition selection and picks 10 of our favorites. We’re not saying these are the best 10 shorts this year, though four won prizes, but we believe each brings something that shouldn’t be missed.

Screening at Cannes Directors’ Fortnight, Mizushiri’s fourth short and the first project co-produced by Japanese New Deer and France’s Miyu Productions. Employing Mizushiri’s hallmark focus on the senses, non-plot stories and geometric landscapes, a film about touch –  “something very hard to do in animation basically because of the lack of a real body on screen,” Annecy Festival Artistic Director Marcel Jean commented. EM

Annecy’s 2022 best short film Cristal. Taunted, he thinks, by an evil Santa Claus gnome, Clyde drives his car, fiancee inside, off a cliff. Disfigured, he survives, takes hypnotherapy, attempts suicide, is saved by a wonderful women who forces him to confront his inner demons. A “psycho-comedy,” and wild aesthetic ride from Hungary’s Balázs Turai (“The Fall of Rome”), a non-dialogue action piece come horror haunting set against delightful pop-out tropical-toned 2D and rocking to a dark techno-rock score. JH

If the word “dreamlike” might be the single most overused adjective in all animation, in this case circumstances force our hand. For there is no better way to describe Emma Calder’s mixed-media tour through the subconscious than to call it a particularly masterful nightmare. Mixing sex, violence, memory, and guilt as it explores the various obsessions supercharging a poor woman’s anxieties, “Beware of Train” fuses diverse textures and visual styles, jumbling theme and image together in a propulsive montage. BC

Another entry from France’s Miyu Productions, a multiple prize winner at this year’s Annecy, alongside Nobuaki Doi. Already a special mention laureate at 2022’s Berlin Festival, the minimalist non-dialogue tale is inspired by the Nô theatre, portraying a group of children who gather to dance under the inquisitive look of their tutor until a girl breaks into the scene. A highly hypnotic analysis of rituals, laced with controlled comedy, suggestive music adapts a popular Catalan tune to the musical style of traditional Nô dance-drama. EM

Charmingly voiced in the first person, a girl evokes her memories her father at his funeral. Drawn on paper in a pointillist style, the short, the director has explained, aimed at melding two concepts –a child’s memories and natural landscape. The result is totally melancholic and mesmerizing. Honami’s second short, and a Grand Prize winner for short animation at the Ottawa Animation Festival last year. Honami studied at the Tokyo University of the Arts aunder Kōji Yamamura, director of the Annecy-winning and Oscar-nominated “Atama-yama,” who also produced “A Bite of Bone.” EM

A surrealist journey through a day in the life of a spirited young upper-class woman from the U.K.’s award-winning Elizabeth Hobbs. On her daily visits to the London Zoo, the girl befriends a hyena. Prepared to go to great lengths to avoid attending a dinner dance organised in her honor, she convinces the hyena to take her place. Their plan, however, requires a surprising amount of artistry and violence. Using cut-outs, painting, drawing on paper, rotoscoping and a startling musical score, a film based on a short story by British-born Mexican surrealist painter Leonora Carrington. “Total animation, made with wit and irony,” said Jean. LP

In 1917, a calamitous explosion in Halifax harbor levelled the Nova Scotia city, while claiming more than 1700 lives. Directors Wendy Tilby and Amanda Forbis’s “The Flying Sailor” follows one miraculous survivor – a mariner blown skyward by the blast who landed naked and intact 2.5 miles away. Slight in length and vast in scope, the dialogue-free film has an elemental and almost abstract quality, exploring fire and water, sky and sea, as it follows the sailor through the air, into the cosmic, and then back down to earth. BC

A traveller leaves an antique music store owner a magic vinyl, reads the listener’s soul, prompting through music memories which have been suppressed, in the owner’s case of World War II – and his Jewish mother being taken away by Nazi police. Drawn in black and white, with a brief section of color and a superb evocation of light and shadow, one title in a strong presence of Swiss shorts at Annecy, including Marina Rosset’s “The Queen of the Foxes” and Raphaëlle Stolz’s “Miracasas.” JH

“Steakhouse” builds out a searing domestic drama with a sense of humor as dark and singed as an overcooked steak. As middle-aged Liza makes her home from the office, her husband Franc prepares her a special birthday meal, but for this couple on edge, all it takes is a simple bout of mismatched timing to send their meticulous plans astray. In less than ten minutes, this festival-favorite cycles through psychological drama and beat-the-clock thriller, threading in elements of dread and body horror as it builds to a lip-smacking punchline. “Relatable, and uncomfortable viewing,” said Jean. BC

As it welds metal powder drawings to 3D imagery and uses stop-motion for sequences somehow figurative and literal all at once, Carlos Gómez Salamanca’s “Yugo” forges an original visual style for a project that fits no simple mold. The experimental doc looks to address the cancer affecting Colombia’s body politic, following a family of economic migrants from a rural village to a Bogota metal plant, watching the shantytowns grow around them as millions of others do the same, and setting personal tale against a stop-motion leitmotif that sees cells dividing at an alarming rate. BC